For the past two decades, since the publication of Wisdom and Innocence: A Life of G.K. Chesterton, Joseph Pearce has established himself as a leading biographer of Christian novelists, poets, authors, and intellectuals. He has written biographies, studies, and works of criticism about Chesterton, J.R.R. Tolkien, C.S. Lewis, Alexander Solzhenitsyn, Hilaire Belloc, Oscar Wilde, William Shakespeare, and others. Since 2014 he has been writer in residence and director of the Center for Faith and Culture at Aquinas College in Nashville, Tennessee; he is also Senior Editor at the Augustine Institute, a Senior Contributor of The Imaginative Conservative, editor of the St. Austin Review, series editor of the Ignatius Critical Editions, and executive director of Catholic Courses.

Death Comes for the War Poets, a new play penned by Pearce, recently finished its premiere run in New York City at the Blackfriars Repertory Theatre. It is described as “a dramatic verse tapestry” as the meat of the play consists of poetry and texts written by Siegfried Sassoon and Wilfred Owen, along with pieces from the works of T.S. Eliot, Edith Sitwell, Rupert Brooke, Gerard Manley Hopkins, and others. Sassoon and Owen, part of a group now known as the “war poets”, were both veterans of the First World War. They met in 1917 at Craiglockhart War Hospital, and that meeting of the two men would have a profound impact on their work. Pearce’s play is inspired by this meeting. 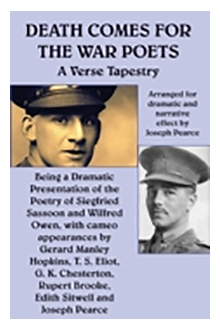 Owen was ultimately killed in action on November 4, 1918, a mere week before the armistice that ended the war. Sassoon lived several decades longer, ultimately converting to Catholicism.

Pearce recently corresponded with Catholic World Report about his new play, its genesis, and its production in New York.

CWR: Where did the idea for this play come from? How did the process go, from the idea, through gestation, through writing, to production of the play?

Joseph Pearce: The idea for the play popped into my mind as if by magic (“magic” being a euphemism for the grace of creativity or the gift of the Muse). I was sitting at my desk one evening after putting our son to bed and the inspiration overtook me, or perhaps took over. In a few hours of intense inspiration it poured forth on to the page, i.e. the computer screen. And yet, even though the inspiration came to me in what might be called a eureka moment, the idea of writing something on Siegfried Sassoon had been gestating in my mind for years and years. I liked the idea of writing a full-length biography of him and, many years ago, prior to my arrival in the United States, I had been in correspondence with George Sassoon, Siegfried’s son and his literary executor, with a biography in mind. Unfortunately George Sassoon was already committed to working with another biographer so was not able to cooperate with me as I needed. In consequence the idea was put on indefinite hold, receding into the background as a vaguely wishful desire.

After I’d finished writing the play, I had no idea what to do with the manuscript, never having written anything in this genre. Thankfully, St. Augustine’s Press offered to publish it as a book, which has just been published, but I had no idea how to go about getting it produced for the stage. Following a casual conversation on one of my speaking trips, I was put in touch with Fr. Peter John Cameron of the Blackfriars Repertory Theatre in New York City. (Fr. Cameron will be better known to many as the editor of Magnificat.) I sent him the script and was delighted to discover that he liked it. He then collaborated with Peter Dobbins of the Storm Theatre Company and with the directors of the Sheen Center to bring the play to the stage. At the suggestion of Fr. Cameron, who was producing the play, and Peter Dobbins, who was directing it, I tweaked the script to make it more suitable for the stage. They then worked with great professional actors and a wonderful choreographer to bring the whole thing to spectacular life. When I saw it performed, I was blown away with what they had done with my mere words.

CWR: You have written numerous literary biographies, and are an expert in the lives of many Catholic writers. What is it about Sassoon and Owen that you felt would transfer well to this medium?

Pearce: I’d admired Wilfred Owen’s poetry ever since high school and discovered Sassoon somewhat later. My impassioned engagement with Sassoon’s life and work began while I was researching my book, Literary Converts, Sassoon being one of the major writers to convert to the Catholic Church in the twentieth century.

CWR: The play is described as a “verse tapestry.” Can you explain what you mean by this?

Pearce: The problem is that Death Comes for the War Poets does not fit neatly into any existing genre. It’s not strictly a play, though it’s easiest to call it such, because it’s not divided into the conventional acts or scenes, nor does it follow other conventions of dramatic form. It has elements of biography but it couldn’t be called a biography, nor is it merely a collection of verse. I called it a “verse tapestry” because it consists of the works of several poets, apart from the poetry of Sassoon and Owen, such as Thomas Gray, Gerard Manley Hopkins, Ernest Dowson, G. K. Chesterton, Rupert Brooke, T. S. Eliot and Edith Sitwell, as well as some of my own verse and prose, all of which are woven together into a dramatic tapestry. Once the work of the actors, the director and the choreographer are added to the performed version it would be more accurate to call it a verse ballet, in which the music of the poetry is interwoven with the dancing and singing of the actors to produce something truly transcendent, truly beautiful.

CWR: Why did you choose to do the play in this way, as opposed to writing a narrative dramatization, perhaps incorporating some of their verse here and there?

Pearce: As explained earlier, I didn’t really choose anything. The whole work was a gift, freely given, with which I cooperated. I really have to thank God, the giver of the Muse, the source of all true inspiration, for enabling me to assist in the bringing of this wonderful thing into being. It is so much better than anything I could have produced of my own volition in the sense of a biography or a narrative dramatization.

CWR: What did you find most challenging about writing a play using existing verse of different poets?

Pearce: It wasn’t a challenge! It was made easy by the intercession of a power which I simply needed to obey. I do have an idea of producing something similar but I can’t see how I could do it – unless I am visited once again by the same mystic Muse which inspired me last time. We shall see.

CWR: Do you think Sassoon and Owen are particularly suited to go together in a play like this? Was their meeting providential?

Pearce: To quote a very famous philosopher (Puddleglum in The Silver Chair!) “there are no accidents”. There was a reason for Sassoon and Owen meeting. If they hadn’t met, we would probably not have the gritty and gutsy poetry that Owen wrote following their meeting, Sassoon being to Owen both a mentor and a muse. Nor would we have Death Comes for the War Poets which would have been unthinkable without their meeting and the fruits of their friendship.

CWR: Have you considered writing other plays featuring literary giants, like Chesterton, Belloc, Lewis, Tolkien, Waugh, or others?

Pearce: I am considering it now, following the success of Death Comes for the War Poets, but I don’t know whether it will happen, or whether it could happen without the same sort of supernatural help that I received last time. I am happily resigned to the realization that it is beyond my hands.

The Sixth Death of the Church

The Church’s “summer of shame” has devastated the faithful. The McCarrick revelations, the Pennsylvania grand jury, and the Viganò testimony have sent reverberations of scandal right through the highest clerical ranks. Catholics in the pews […]