Less than ten years after Anglican clergyman John Henry Newman converted to Catholicism, Pope Pius IX in 1854 issued the apostolic constitution Ineffabilis Deus, which declared, as Catholic dogma, that Mary, by God’s grace, was conceived free from the stain of original sin. Many English Protestants interpreted the promulgation of the Immaculate Conception as an exploitable opportunity to attack Newman and other Catholic converts. Anglican Edward Pusey in 1865 published An Eirenicon, in a Letter to the Author of ‘The Christian Year,’ attacking Marian piety and the Immaculate Conception as unbiblical novelties with little historical warrant. The next year, Newman published a book-length response in which he sought to argue that the Immaculate Conception was not doctrinal corruption, but a legitimate doctrinal development. 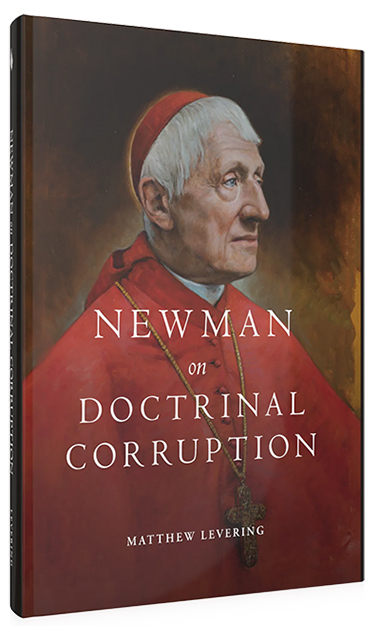 Newman is of course famous for his 1845 work, An Essay on the Development of Christian Doctrine, which was the most important writing on the subject since the monk Vincent of Lérins discussed it in the fifth century. Newman, however, also had much to say on the antithesis of that idea, doctrinal corruption, as Catholic seminary professor Matthew Levering explains in his new book Newman on Doctrinal Corruption. In Levering’s study, we see Newman engaging with five conversation partners: historian Edward Gibbon, anti-Erastian Richard Hurrell Fourde, the aforementioned Pusey, Newman’s own brother and religious skeptic Francis, and Johann Joseph Ignaz von Döllinger, who rejected the doctrine of papal infallibility.

It wasn’t just attacks like those of Pusey that necessitated a more thorough study (and argument in favor of) doctrinal development. Various historical and intellectual developments, perhaps none more influential than the Enlightenment, questioned the veracity of pronouncements of Catholic and Protestant religious leaders, as well as divine revelation itself. Scholars became skeptical of Holy Scripture: not only its incredible claims regarding divine intervention in the affairs of men, but even the basic historicity of the biblical documents themselves. And if neither ecclesial leaders nor the Bible were trustworthy, then why not also conclude Christian doctrine had been corrupted through the centuries? Indeed, the Protestant Reformation more or less let the cat out of the bag on this one, given that the entire movement was premised on the idea that Christian doctrine and practice had been corrupted by the Catholic hierarchy.

Skepticism towards divine revelation — and a concomitant proposal for doctrinal corruption — is made quite explicit in Gibbon’s The History of the Decline and Fall of the Roman Empire. Gibbons argues that Christianity transformed itself from an insular, primarily Jewish Christianity defined by anti-intellectualism, violent zealotry, and strict adherence to the Torah, to a primarily Gentile Christianity that embraced Greek thought such as Platonism. As a man of the Enlightenment, Gibbons was also a materialist who rejected, on principle, the reality of miracles or divine intervention in the natural world.

Newman rejects Gibbons’ historiography, arguing that there was never a Gospel undefiled by “pagan” Greek ideas. It’s true that the Gospel of John — the “most Greek” of the books of the New Testament — was written later than the other Gospels (c. 90 A.D.), and, at least at face value, seems to represent a divergence from earlier manifestations of Christianity. Yet such an assessment is both incomplete and ignorant, given that Jewish thought for centuries had already been in deep intellectual engagement with Greek philosophical thought (see the deuterocanonical Book of Wisdom), and that all the Gospels quote not the Hebrew Torah, but its Greek translation, the Septuagint. Christianity, in fact, was engaging with Hellenistic culture from the beginning.

Moreover, in his An Essay on the Development of Christian Doctrine, Newman argues that, historically speaking, one can identify a “real continuity of doctrine” through the “external continuity of name, profession, and communion.” In other words, the very existence of a Catholic communion composed of clerics and laity articulating an ancient profession of faith through shared liturgical practice seems to bespeak at least some manner of continuity.

Of course, Newman acknowledges that his view of history is colored by his belief in the reality of divine revelation, something that Gibbons (and many others) reject a priori. Yet even if there is no divine revelation, Newman argues that given the ubiquity of human belief in it (both within and outside of Christianity), responsible scholars should at least seek to present a coherent hypothesis about it that could be tested. But Gibbons and other skeptical scholars rarely, if ever, bother with that — they simply write off theism as impossible. And that thinking, argues Levering, evinces its own incoherence, since such scholars often exhibit their own biases and blind faith in their own theories about human nature and motivations (e.g. Gibbon’s belief that all human history is reducible to power relationships) or the nature of knowledge itself (e.g. moderns’ unjustified skepticism towards sense-knowledge).

As Levering acknowledges, most people today are not intellectual inheritors of Newman and his reasoned trust in doctrinal development, but of Gibbons and his skepticism towards divine revelation. To cite Pope Emeritus Benedict XVI, our society believes a hermeneutic of rupture, or discontinuity, defines Christian history. Even many Christians equate their faith with empty platitudes that leave little substance upon which to maintain a Church or doctrine. Christianity is reduced to love, acceptance, or the power of the Spirit guiding each new generation of the faithful towards the eschaton. What matters is authenticity. This, writes Levering, “renders Christianity devoid of truth-content prior to the eschaton.” More bluntly, it’s just emotivism.

Liberal theology, for example, sought to answer modern concerns with doctrinal corruption by relativizing doctrine itself. The Christian religion is not expressed dogmatically via eternal truths, but through experience and practice. This is the position of Protestants such as Friedrich Schleiermacher and Ernst Troeltsch and Catholics such as Edward Schillebeeckx and Karl Rahner. In 1977, Rahner proposed that the global Church will face an “incommensurable” pluralism incapable of synthesis, which will require doctrinal formulations in varying contexts that will appear incommensurable and will be incapable of a single, coherent formulation or interpretation. Only a generic “faith in Christ” will unite Christians, argued Rahner.

This line of thinking is also visible in the work of contemporary Orthodox theologian David Bentley Hart, who has called Newman’s An Essay on the Development of Christian Doctrine a “splendid speculative fantasia.” Hart argues in his recent Tradition and Apocalypse: An Essay on the Future of Christian Belief that “the proper moral and spiritual attitude to tradition’s formal expressions… would not be a simple clinging to what has been received, but also a relinquishing, even at times of things that had once seemed most precious: Gelassenheit, to use Eckhart’s language, release.” Hart places personal intuition and religious experience as the real core of Christianity. “Faith is the will to let the past be reborn in the present as more than what until now had been known, and the will to let the present be shaped by a future yet to be revealed.”

Apart from the fact that this is little more than emotivism clothed in Hart’s impressive (if often pretentious) prose is that he violates his own idea when it comes to the dogmas he holds most dear. Levering notes, for example, that Hart has claimed that anyone who does not believe in the universal salvation of humans and angels/demons is a worshiper of an evil “god” and engaged in idolatry. “Liberal theologies,” writes Levering, “are as enmeshed in absolute dogmatic truth as are any other theologies, but on different grounds.”

Levering’s book, admittedly, is not intended to articulate a robust conception of Newman’s doctrine of development that will summarily refute liberal Protestants, Rahner, or Hart. Nevertheless, it is worth at least briefly, if somewhat superficially, explaining what Newman offers as a riposte to a skepticism that has grown only stronger over the last century-and-a-half. Newman presents the doctrines of cumulative probabilities and the sacramental principle as effective counters to liberalism. The former is somewhat self-explanatory: we consider what is most probable regarding human history and religion and (perhaps to our surprise) determine Catholic claims regarding divine revelation to well align with that probability. The latter teaches that “material phenomena are both the types and instruments of real things unseen…. That the exterior world, physical and historical, was but the outward manifestation of reality greater than itself.” This allows the Church to be fully immersed in historical change, while still communicating eternal divine realities in history.

Newman understood that the truths espoused by the Catholic Church are what Levering calls “inadequate expressions of inexhaustible mysteries.” What the Church teaches about the Incarnation and the Trinity cannot possibly encompass the entire realities of those ideas. Nevertheless, within the Catholic paradigm, even if the dogmatic articulations of the Incarnation and the Trinity are not exhaustive, they are still true. And, argues Newman, the Catholic can believe these not based on a rationalistic proof or blind, fideistic trust (just believe!), but according to accumulated probabilities informed by faith. One may accept those probabilities based on sound reason, what Levering terms “the providential course of the Spirit-guided Church in history.”

In sum, without a hermeneutic of continuity premised on articulations about eternal divine revelation, Catholicism (and all Christianity) withers away, becoming indistinguishable from every other emotive claim, be it about spirituality or ethics. Levering explains: “If the Church were to repudiate one of its solemnly taught doctrines, this would entail that the Church either has corrupted or is now corrupting the apostolic deposit of faith, a sin indeed.” Once you welcome in doctrinal corruption, it’s only a matter of time before it permeates everything, making Christianity into either an intellectually indefensible fideism or subjective emotivism.

The Evangelical Path of Word on Fire

I commenced my writing career, roughly twenty-five years ago, as a critic of liberal Catholicism, which I referred to, in one of the first articles I ever published, as “beige Catholicism.” By this designation, I […]

As I indicated in a recent CWR essay, I have lived under the guidance of John Henry Cardinal Newman from my boyhood. Obviously, then, his canonization on October 13 was a much-anticipated event. For many, […]

What’s going to bring the ‘nones’ back to the Church?

Baltimore, Md., Jun 14, 2019 / 02:49 pm (CNA).- As the U.S. bishops gathered in Baltimore this week, primarily to vote on proposals to respond to the clergy abuse crisis, another crisis loomed large with […]