The idyllic scenes from the English countryside have long captured the imagination of many non-Englanders. We picture rolling green hills, stone walls, sheep and cows grazing in mist-covered fields, and a centuries-old church at the heart of each village, a brick-and-mortar sign of the deep Christian (and, indeed, Catholic) identity of this island nation. The village church serves as the center of village life, with the Sunday Mass as the apex of the week. 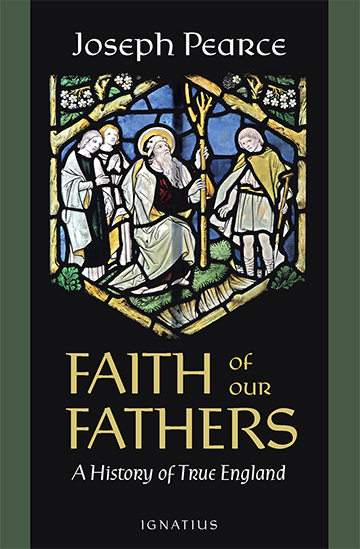 Many of us have this image because for many centuries, the Catholic Church was in fact the heart and soul of England. Since the arrival of Christian missionaries in the first century, the Church flourished. But of course, in the sixteenth century, King Henry VIII took his kingdom in a new direction, which would have tremendous and often terrible (and bloody) consequences from that point on.

In Faith of Our Fathers: A History of True England (Ignatius Press, 2022), Joseph Pearce walks the reader through the history of England, tracing the Christian thread throughout that history, right down to the present day. He looks at the first Christians in Romain Britain, through Bede, Edward the Confessor, Thomas More, John Henry Newman, Tolkien, Waugh, Chesterton, and more. He shows how a recognition of the Catholic Church’s importance in this island’s past gives one a true and deeper understanding of English history.

Pearce is the author of nearly three dozen books, including biographies of J.R.R. Tolkien, G.K. Chesterton, and Oscar Wilde, explorations of the Catholicism of William Shakespeare, and the converts of the English literary revival; he is also series editor of the Ignatius Critical Editions.

He recently spoke with Catholic World Report about his latest book and the future of the Catholic Church in England.

Joseph Pearce: As an Englishman and a Catholic, I’ve grappled with my sense of identity. The England to which I hold allegiance is the England which has been true to the Truth Himself. This is the “true England” which is celebrated in the book.

CWR: Is this “true England” related to the difference between England and Britain? I have heard you speak before of the distinction between “little England” and “Great Britain”. Is this important and how does it relate to the book?

When Britain had an Empire
The sun would never set,
But the sun set over England
And Englishmen forget
That greater than the Empire
Are the rolling Yorkshire Moors
And more glorious the Dales
Than all the Empire’s wars.

In keeping with this understanding of my homeland, the book is a history of England, not of Britain.

CWR: What do you mean when you call England a “Christ-haunted country”?

Pearce: As I explain and show in the first chapters of my book, English national identity is interwoven with pious legends about the Christ Child visiting England with Saint Joseph of Arimathea, or with the legend that Saint Joseph of Arimathea led the first mission to England after the Roman Conquest, bringing with him the Holy Grail, the chalice that Christ had used at the Last Supper.

These pious legends might be nothing more than wishful thinking but they do demonstrate a great desire for Christ’s Presence; and, of course, the legend about the Holy Grail gave birth to all the multifarious Arthurian legends and romances which are so central to the English national myth and with English national identity. This is why England is Christ-haunted to its spiritual core.

CWR: The history of England is filled with some of the most remarkable saints in the Church’s history, as well as some of her greatest persecutors. (This is the case in many historically Christian nations, but seems to be true to a greater degree in England.) Why is that? Is there something about England that brings out these incredible saints and tremendous persecutions?

Pearce: Anglo-Saxon England, i.e. the England prior to the Norman Conquest in 1066, was a land of saints. It’s really astonishing how many saints graced the 500 years of English history prior to the Conquest. There are too many to name but we might think especially of Saint Bede the Venerable or Saint Boniface. At the end of the Saxon era, there was a saint on the throne (King Edward the Confessor) and England was blessed with the famous apparition of the Blessed Virgin at Walsingham. The Marian shrine at Walsingham would be one of the major pilgrimage destinations of the whole of Christendom in the Middle Ages.

The land of saints during Anglo-Saxon times was superseded in my judgment by the land of martyrs that England became during the reign of Tudor and Stuart Terror from the 1530s to the 1680s. These martyrs are, for me, the very jewel in the crown of true England, the crown itself being Our Lady of Walsingham, England’s true and timeless queen.

CWR: One of the most stunning periods in the Church’s history in England is, of course, the English Reformation, started under Henry VIII (whom the pope had previously declared “Defender of the Faith”, a title which his successors have stubbornly held onto). The recusants, the martyrs, Thomas More, John Fisher, Edmund Campion, William Byrd, the flip-flopping of the throne from Catholic to Anglican and back and forth – why does this so capture our imagination?

Pearce: I think it captures the imagination because it is a battle for the very soul of the nation.

It is also a battle between those whose treasure is in worldly things and those whose treasure is in heaven. Those who won politically in the war on Christ, crucifying Him in the torturing and death of the English Martyrs, have had their reward, as have the canonized and beatified martyrs. In whose shoes would we rather be? Who are the true victors?

CWR: Do you think England’s abandonment of the Church has led to an ongoing secularization, even though the country remains ostensibly Christian?

Pearce: I would stress that true England has never abandoned the Faith. Witness the resurrection of the Catholic Faith in England in the middle of the nineteenth century, after three whole centuries of relentless persecution. Witness Saint John Henry Newman’s conversion and influence. Witness the Catholic cultural revival. Witness Hopkins, Belloc, Chesterton, Benson, Knox, Waugh and Tolkien, to name but an illustrious few.

I do feel, however, that the radical secularism of British culture is a consequence of the cynicism that arose from the establishment of a state religion, which was never popular with the English people; first because it was forced upon them against their will and later because it was seen to be too worldly in its relationship with the institutions of the secular British state.

CWR: Do you think there is any hope of England finding its way back to the Faith?

Pearce: Of course! As the famous hymn “Faith of Our Fathers” proclaims: “Mary’s prayers will win our country back to Thee and, through the truth that comes from God, England will then indeed be free.”

The shrine of Our Lady of Walsingham is attracting more pilgrims than at any time since the Middle Ages. The Queen has returned! All we need is a miracle! Perhaps her intercession might provide it.

CWR: Was there anything you learned in the process of writing the book that surprised you, or even altered the trajectory of what you were writing?

Pearce: I learned a great deal but it was really adding flesh to the bones that I already knew. The writing of the book has enabled me to get closer to the true and noble heart of my homeland. I now know my own country more intimately than ever. What a blessing!

CWR: What do you hope readers will take away from this book?

Pearce: I believe that every nation of Christendom has its true self, its essentially Christian character for which every generation has witnessed. I hope that those from other nations who read my book will seek to know more about their own true heritage. Perhaps my book might inspire others to write histories of true Ireland, true Scotland, true Wales, true France, true Germany, true Spain, and the true United States.

Pearce: Only that the writing of the book has been an unmitigated blessing beyond my deserts. Domine, non sum dignus!

• Related at CWR: “Jesuit Martyrs and the Tudor Terror”, an excerpt from Faith of Our Fathers: A History of True England, by Joseph Pearce

All who reverence the Bible, but especially Christians, ought to have a deep appreciation for words and for those who take words and give them […]

Robert Hugh Benson, literary converts, and the Church in a dystopian age

In this interview with Jan Franczak for the Polish Journal, PCh24, biographer and literary critic Joseph Pearce discusses the importance of the convert writer, Robert Hugh Benson (1871-1914), as well as other great literary converts. […]