A friend who works for one of the Forbes’ “Fifty Best Employers” recently told me about the organization’s LGBTQ+ alliance, which now pushes its government-sanctioned messaging on the workforce through regular emails. One newsletter explained the meaning of bisexuality, and included a link to FAQs that encourage a “more bi-inclusive workplace,” as well as testimonials from a score of employees who are “out” as bisexual.

“Some Bi people practice consensual non-monogamy, in which they have multiple, loving, romantic, or sexual relationships with the knowledge and consent of the relationship structure of all involved,” explained the FAQ section.

It all sounds very clinical and professional, with carefully-curated jargonese explaining the intricacies of alternative sexual lifestyles, while bearing the imprimatur of the academy and its technocratic gatekeepers. Though one wonders what, exactly, these people’s sexual fetishes have to do with, well, work. And even the act of trying to ask honest questions to such persons — say, for example, what it means to be married and have children and yet be publicly bisexual — is itself to risk being labeled a bigot raining on their self-congratulatory parade.

For self-congratulation really is the pervading theme across this movement and its testimonials. Such persons are constantly praising each other’s “courage” for being “out” as bi, transgender, or whatever. Yet how bold can they truly be, given one never finds pushback or criticism in the forums in which their lifestyles are lauded? Alternatively, one presumes “courageous” would not be the word these same persons would use to describe a faithful Catholic who publicly declares his or her Church-sanctioned opinions on abortion, contraception, sexuality, or gender identity. 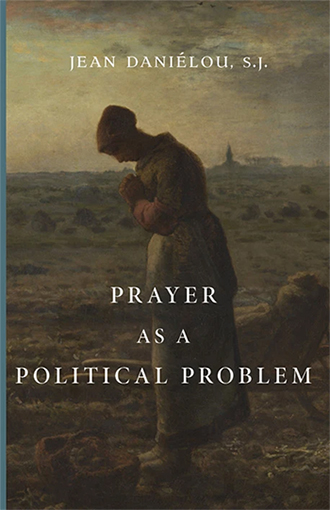 And that fact, I offer, is perhaps the most illustrative of this new socio-political reality. For it is a paradigm based on a certain kind of narcissistic self-celebration that can brook no opposition, and thus must dominate every social ecosystem it inhabits, be it C suites, federal workspaces, or the public square. “I am wonderful,” its adherents declare, “and everything I choose to do with my body is wonderful.” To question that script, they warn, is to attack their very personhood, a third rail that comes with professional and personal costs. In short, free speech, and even freedom of religion, must bend the knee before sexual and gender identity.

French theologian Jean Daniélou, S.J.(1905-1974), foresaw this impending threat in his extended Prayer As a Political Problem, recently republished by Cluny Media. There he writes that, “technological man is part of a self-centered collectivity.” He continues:

In so far as they [those embracing a secular, technologist worldview] see themselves as more to be admired, they are that much less inclined to admire anything greater than themselves. From some points of view man grows into a screen which shuts off the sight of God, or a lens which concentrates attention and admiration upon himself.

The secular, materialist worldview has persuaded humanity that it possesses within itself the means to realize its own salvation. Not only that, but man himself — and all of his gender and sexual fixations — are what is worthy of worship, rather than the transcendent and divine. Thus our culture is increasingly dominated by narratives of autolatry, the idolization of self.

And this self-worship ushers in a new, unexpected form of barbarism. “The modern world,” says Daniélou, “can perfectly well become a barbaric world.” Its barbarism can be felt not only in its visceral antagonism towards its opponents, but how it perceives the human person. For many persons must be sacrificed at the altar of what Scott Yenor calls the “rolling revolution”: babies in the womb; children who must suffer parents explaining their confusing, exploratory sexual journeys at the dinner table; and the many Americans persuaded to indulge in self-destructive and self-mutilative practices, many of which will bear wounds near impossible to erase.

This barbarism is then progressively pushed upon all of American society, who are coerced to either celebrate or themselves indulge in this behavior. This, of course, is a great threat to those communities — including the Christian ones — who reject a worldview that elevates sexual and gender identity as the pinnacle of human self-understanding and self-expression. Hence it is that prayer itself becomes a political problem.

For prayer is more than the individual, silent act of communication with the divine. “Religious freedom must be thought of as a right that belongs to communities as well as to individuals,” says Daniélou. “It implies not only that people should be able to practice a religion publicly, but also that they should have the scope and mutual support necessary to order their lives in accordance with the demands of that religion.”

Education, medical care, and volunteerism are all expressions of prayer, or worship of God that bleed into the public square. The Christian lives, works, and worships both within his own religious community and the broader polis. And, at least within the Catholic tradition, man is no autonomous individual whose telos is his own self-actualization, but one bound to a community and God to which he offers himself as gift.

Man thus needs a city that makes prayer possible, that allows him freedom to realize his transcendent purposes, not only within the privacy of his heart and home, but in the wider world. “If we accept a complete dissociation of the sacred and the profane worlds, we shall make access to prayer absolutely impossible to the mass of mankind,” writes Daniélou, And that is the express objective of those who scorn those religious communities who reject the sexual revolution and its aberrant forms of self-expression:

While politics cannot touch the inner man for this escapes completely from its competence; it can destroy the Churches. It can reach them because they are the collective expression of adoration. Not only can it do this, it does it.

It does it by asserting to our nation what behaviors and beliefs are acceptable, and what are not. It does it by exerting increased social, political, and financial pressure on those religious institutions who do not endorse the FAQ section of LGBTQ corporate and federal websites. And it does by silencing (or canceling) those who publicly dissent, making it increasingly difficult for such persons to live and work in those places where there is access to social and economic prosperity or mobility.

What is a prayerful person to do? Daniélou’s answer is not one of capitulation or withdrawal:

The Christian must not turn aside and sulk, preferring always what is past and finding fault with what is present. Such behavior shows a lack of respect for that which God himself has willed. What God asks of us is to live in this world, to make ourselves part of it.

That is the heroic, if difficult and disconcerting answer. To retreat in the face of danger is to misunderstand what God is calling us to right now. The answer to the political problem of prayer is not to redefine our religious expression as isolated to the privacy of our homes or even consciences. That has never been the proper option for the faithful Christian. Says Daniélou:

When, whether in unions, politics, or cultural matters, a Christian becomes wholly involved in struggles to bring the earthly city into conformity with its charter, or, what is the same thing, with the true ends of man, he does not quit God nor God’s sanctuary to lose himself in a foreign world, as all too often he is led to think.”

This is not only because cowardice is shameful (though of course it is). It is because when the Christian serves the city of man, it is precisely then that he serves God and neighbor, and furthers the mission of the kingdom of God. In man’s “service of civilization through its institutions, he will be in process of saving his soul.”

Such a worldview was at work within the saints of the early Church, who refused to offer incense — however paltry and pro forma — to foreign gods. It was at work in Reformation-era saints such as St. Thomas More and St. John Fisher, who understood that their Catholic faith was necessarily bound up with specific political choices (like whether or not the King of England could rightly be called “head of the church”). And it was at work in the preaching of St. Oscar Romero, who died fighting for the cause of human rights in El Salvador.

All of them understood that prayer, by its very nature, was a political problem. And all of them believed that it was one that required persevering in the public square, no matter the costs. The question for us today is simply this: when push comes to shove, and the celebration of sin becomes compulsory, will we?