James Agee’s short 1950 novel The Morning Watch, recently republished by Angelico Press, is the kind of book about which little can be said without spoiling it. Nevertheless, I will try to say just enough to convince the reader to obtain a copy, because it is well worth reading. 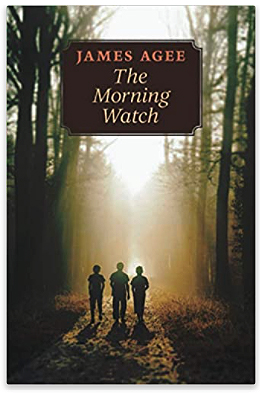 The Morning Watch takes place early on Good Friday morning in 1923 at a high-church Episcopal boarding school in Tennessee, largely within the mind of a twelve-year-old student named Richard. The storyline—if that is not too definite a word for this meditative, poem-like work—is the progression of Richard’s thoughts and feelings as he attempts to contemplate the mystery of Christ’s suffering and death, but finds himself beset by distractions and temptations.

The plot—again, a word almost too strong for this brief and delicate story—traces a subtle conversion in Richard of which he himself is completely unaware: not from sinner to saint, but from an inwardly-focused, treading-on-eggshells, scrupulous moralism to the beginnings of true love of the Incarnate God. The point of the story (if “point” does not make it sound infinitely more preachy than it is) could be summed up as Richard beginning to undergo the kenotic transformation described by St. Athanasius: “The Son of God became man that man might become God.”

Agee—a noted screenwriter who died of a heart attack in 1955—captures with stunning perfection the mind of a self-conscious adolescent with a strong natural piety, shaped into pensiveness and even rigidity by circumstances, but open to beauty and grace. (Unsurprisingly, the work is autobiographical.) The reader thinks and feels with Richard, achieving moments of meditation on profound truths, and yet stands outside of Richard enough to see that some of his sins are actually scruples, and some of what he sees as pride in himself is actually grace.

As he begins his watch-hour at the altar of repose, Richard prays the “Anima Christi,” but trips over the lines that seem to him problematic, including, “That with Thy saints I may praise Thee.” Agee narrates the boy’s thoughts: “[I]t was wrong for people to ask to be saints, flat as all that. … To just barely manage through God’s infinite mercy to escape burning eternally in the everlasting fires of Hell ought to be just about as much as any good Catholic could pray for.” He is distressed to remember that he used to want to be a saint, having wild daydreams of being crucified like Jesus; how prideful!

But toward the end of the book, that same boy, forgetful of the solemn liturgical day, sees a locust-skin on a tree trunk and carefully detaches it to take home in his pocket, as any healthy twelve-year-old boy should on any ordinary day. He has finally forgotten himself enough to accept unthinkingly the real trials and joys of his actual life. True humility—perhaps even true sanctity—has been planted in him, ironically, the moment he stops berating himself for his pride.

All of this runs the risk of making the work sound morally simplistic; the real book is much better than this review, weaving together numerous small changes of the heart, like the patterns made by light through wind-ruffled trees.

A note on style: Agee’s language is filled with rich metaphors, powerful images, and symbolism at times so subtle it is barely detectable, at other times hitting the reader like a needed thunderclap that clears the heavy air. The reader who savors each phrase of the long, deftly-plaited sentences will be rewarded with a prayer-like state of mind and refreshment of spirit brought about by the writing itself as much as the subject.

It would be, I think, not entirely unfitting to read this slim novella during one’s own watch-hour at the altar of repose on Good Friday morning: not simply to use the book for its moral warnings and examples, but in order to marvel at God’s goodness toward the human soul, and to turn outside of oneself—as Richard must—to focus wholeheartedly on the gift of Christ’s triumphant sacrifice.

Editor’s note: A previous version of this review mistakenly referred to the novel’s setting as a Catholic boarding school. In fact, the fictional school is based on the real-life St. Andrew’s-Sewanee School (formerly called St. Andrew’s School for Mountain Boys), which is affiliated with the Episcopal Church.

Baptizing the culture with the stories we tell

Of late, an increasing number of authors and filmmakers have this in common: their stories derive from worldviews that hold little understanding or appreciation of the Gospel of Jesus Christ and all that the Church […]

Old School The University of Wyoming bookstore was a magical place back when I started going to college. So many books. So much knowledge. I saw it as a gateway to new worlds, a launching […]