Like me, if you know anything about Tolkien’s life, it is probably owing to the work of Humphrey Carpenter, who cornered the market in Tolkien scholarship in its early years, producing both the first major biography and what is still the only edition of Tolkien’s letters. 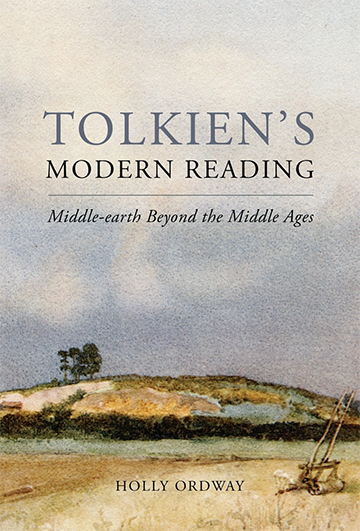 It is Carpenter who popularized the idea that Tolkien was a reactionary old medievalist, uninterested in contemporary literature: “The major names in twentieth-century writing meant little or nothing to [Tolkien]. He read very little modern fiction, and took no serious notice of it.”

Carpenter’s caricature of Tolkien as someone staring fixedly into the rear-view mirror, has, as we would now say, gone viral; people take it for granted. In the BBC radio drama Tolkien in Love (2017), the Tolkien character says that “everything after 1066 should be excised from schools” and his wife, Edith, labels him a “Luddite”.

Likewise, broadcaster Andrew Marr, in his documentary about fantasy writers, asserts that Tolkien marinated himself “in everything from the early sagas to the magical romances”, the “old stories” which gave him the tools for his own fiction.

I must confess that I too drank the Carpenter kool-aid. In my monograph on C.S. Lewis, I emphasized “that Tolkien’s literary tastes were quite extraordinarily narrow (he read little in English literature after Chaucer)”.

Having read Tolkien’s Modern Reading: Middle-earth Beyond the Middle Ages, I have revised my view. I was wrong. Full disclosure: Holly Ordway is a friend and colleague, who has even seen fit to dedicate this book to me. But I trust that my mea culpa will somewhat insulate me against charges of being simply a cheerleader for her work. At any rate, if I’m leading the cheers, I’m also leading the confessional line at the same time. Indeed, Ordway even quotes in the pages of her book the email I wrote to her after seeing a draft of her work, in which I say, “I repent in dust and ashes. Though I know Lewis like the back of my hand, I’m no specialist on Tolkien, and I trusted that Carpenter knew what he was talking about. Clearly, he didn’t!”

It is a pleasure to be so thoroughly disabused. As Ordway demonstrates beyond peradventure, Tolkien actually read a great deal of modern literature (works written after 1850) and took very serious notice of it. She identifies about 150 authors and at least 200 titles of modern works that he knew. These include several that Tolkien himself explicitly named as sources for or influences upon his own imaginative writings.

He said that E.A. Wyke-Smith’s The Marvellous Land of Snergs may have been an unconscious source-book for his own hobbits. He points to a story by George Dasent as a fount of the term “Moria”, the mines where Gandalf battles the Balrog. He indicates that he took the term “Crack of Doom” from a work by Algernon Blackwood.

The list goes on. The fight with the wargs in The Hobbit owed a debt, Tolkien said, to a similar scene in The Black Douglas by S.R. Crockett. He admitted that his goblins derived some of their features from the tales of George MacDonald. He even conceded that hobbit “might have been associated with Sinclair Lewis’s Babbitt”.

Tolkien said that he read “all” of Sinclair Lewis, author of over twenty novels and winner of the 1930 Nobel Prize for Literature. Tolkien nominated E.M. Forster for the same prize in 1954.

He also read James Joyce with care, translating the name of one of Joyce’s characters into Qenya, his invented language. He was familiar with T.S. Eliot’s Four Quartets and complained about John Masefield’s poetic tribute to Eliot upon his death in 1965 almost as if he had a cautiously positive view of the works of Old Possum.

A major literary figure in Tolkien’s day was the Birmingham author, J.H. Shorthouse, whose John Inglesant: A Romance was a smash hit; Lord Acton called it the most thoughtful novel since Middlemarch. As a boy, Tolkien passed Shorthouse’s front-door every morning on his way to Mass. Few people today have read John Inglesant, but Ordway has, and she points out that its preoccupation with the virtue of pity may well have affected Tolkien’s development of that very theme in The Lord of the Rings.

Not that Ordway is woodenly source-hunting. She draws her parallels tentatively, more interested in accumulating evidence of Tolkien’s modern reading than in proving any particular debts he incurred. One exception, perhaps, is her comparison of Tolkien’s Ents (Treebeard and co.) to the sorns of C.S. Lewis’s Out of the Silent Planet. Here she mines such a rich vein that it is hard to doubt she has made a real find. And the same goes for her observations about Éowyn’s literary forebears in the work of William Morris; about the Book of Mazarbul’s link to the extra-textual artefacts of Rider Haggard; about Bilbo’s affinity with (remarkably, but persuasively) Peter Rabbit!

Ordway ventures beyond literature at times to assess how modern-minded Tolkien was with regard to technology, race, women, colonialism, even liturgical reform, again puncturing the accepted view that Tolkien was simply a die-hard traditionalist. She points out that he approved of the new liturgy “in the abstract,” while admitting to being saddened by it personally:

Given both the extent and the abruptness of the shift from the Tridentine Mass to the Novus Ordo, it would be startling if Tolkien had not felt disconcerted by the change; what is most notable is that he distinguishes his own emotional reaction from his approval of the reform in principle.

This outstanding work is a major corrective and a significant addition to Tolkien scholarship. It is also the premiere title of Word on Fire Academic, a new imprint, and is beautifully designed and produced, with a photo gallery in full color, showing many of the authors and books Tolkien read.

Written with wit, flair, and feeling, it concludes on a story about Tolkien’s painting of Rivendell which I challenge you to read without welling up.

About Michael Ward 1 Article
Michael Ward is a Fellow of Blackfriars Hall, University of Oxford, Professor of Apologetics at Houston Baptist University, and author of Planet Narnia: The Seven Heavens in the Imagination of C.S. Lewis (Oxford University Press).

May 25th is the feast day of St. Bede, who, perhaps after St. Gregory of Narek, would likely win the award for “least known doctor of the church,” of which there are a total of […]

What’s missing in the “Tolkien” biopic

This weekend, American movie theaters will feature the first-ever biopic of J.R.R. Tolkien, the most important fantasy writer, and the most popular writer to have thought through the moral and political changes Christianity brought into […]

“You’re a monster!” screams Madison Russell (played by Millie Bobby Brown) in Godzilla: King of the Monsters. She screams this at her mother, Dr. Emma Russell (Vera Farmiga), who has just made the decision to […]