St. Francis of Assisi’s words: “I want to stage the birth of Jesus in Bethlehem to show the wonders of the Spirit through the eyes of the body,” have struck a chord with Italian priest, Father Marco Polverari. According to tradition, St. Francis pronounced them in 1223 in Greccio, a small mountain village near Rome, where the poor man of Assisi staged the first Nativity scene in history. It was not made of statues; it was enacted and experienced by all present.

But the Spirit’s wonders neither begin, nor end, in Bethlehem with the birth of our Savior.

Hence, in a small Italian town on the Adriatic Sea called Fano, thanks to the commitment and passion of Fr. Polverari, today there is a loved nativity scene that is hard to capture in words. In fact, it is a journey through more than 50 scenes that tell the whole biblical story of salvation, starting from the world’s creation and ending with the Acts of the Apostles.

When Fr. Polverari was a child, he recalls how during the holiday season his parents took him to see the nativity scenes in Fano.

“I stretched out my neck to not lose any detail,” he remembers. The largest and most famous nativity scene in the city was the one of the religious Institute of the Fathers of the “Little Work of Divine Providence” (Orionine Fathers). Still affirming with admiration, Fr. Polverari says to this day that scene remained “a wonder for children, really.”

Since then, he underscores, “I have never neglected to set up my nativity scene at home at Christmas.” Even if in the meantime he entered the seminary to become a priest and faced intense theological and philosophical studies, he tells CWR that he did not lose—what he himself calls—”my natural aptitude for manual work.”

That attitude would be useful to him as a priest, because “even the crib is a tool for evangelization,” he affirms today. 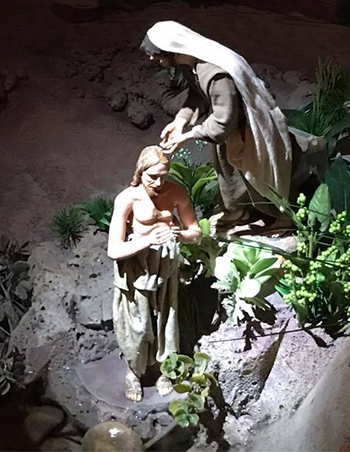 In 1996, he became chaplain of the Church of St. Mark Evangelist, in Fano’s historic center. The only space available there to build the crib was under a tent outdoors. Once the Christmas holidays were over, it had to be disassembled and then rebuilt again the following year, and so on, until Christmas 2000.

Fr. Polverari’s passion for the nativity scene had become well-known everywhere in Fano, and thus, the city’s vice-mayor, Renato Minardi, one day by surprise made a proposal: “Why don’t you try to set up a nativity scene here?”

The location was the large basement of an ancient building Palazzo Fabbri dating back to the 700s. The municipality of Fano was willing to grant free use of it, making it no longer necessary to build and destroy the crib every year.

Fr. Polverari, thrilled, accepted the proposal. In 2001, Fano’s inhabitants admired for the first time the “St. Mark’s presepe”, named after the church where, in the meantime, he had become parish-priest. But his plans didn’t stop in the Bethlehem grotto.

It is important to note that when Italians say “presepe” or “presepio” (from the Latin “praesepium”, namely “stable for animals”, and Italian, translated literally as “crib”), they refer to the model of the Nativity of Christ, according to a tradition very widespread in Italy, among families, parishes, churches. Despite secularization advancing even here, especially among young people who are increasingly indifferent to the religiosity of their grandparents and parents, “the specialized sellers of crib items say that sales have not decreased at all in recent years,” says Fr. Marco.

With a large 350 square-meter space, Fr. Marco’s interest in building not only the “usual” crib, grew stronger. After Christmas 2001, Fr. Polverari and his collaborators got back to work, with wood, plaster and polystyrene, the basic materials of every large crib. They never stopped working since then.

From 2001 to today, every visitor for Christmas to Fano’s “St. Mark’s presepe” have found new scenes, currently amounting to 53, which make for an 80-meter-long ‘journey’. The first scenes are inspired by Genesis: creation of the world and original sin of Adam and Eve. Then there is Cain who kills Abel; Noah’s Ark, with the animals queuing to enter, and the Great Flood; the vocation of Abraham; Joseph sold as a slave by the brothers; Moses saved from the waters, the Exodus and the Ten Commandments, and so on.

The birth of Jesus is preceded by the Annunciation and Mary’s visit to Elizabeth. After the nativity scene, where the work began, the journey continues with the Adoration of the Magi, the flight into Egypt, the life of Jesus in Nazareth, the Baptism in the Jordan, the Wedding at Cana, the healing of the paralytic, the meeting with the Samaritan woman at the well, the Parable of the Good Sower …

The story continues toward Easter. There is the entry of Jesus into Jerusalem, the prayer in the Gethsemane, Jesus before Pilate, the Condemnation, the Way of the Cross on Calvary, the Crucifixion and the Resurrection.

Fr. Polverari and his collaborators regardless are still not satisfied. Before Christmas 2019, they added the scene of the disciples of Emmaus. Now, the path ends with St. Peter’s Basilica to signify the history of the Church continuing through the present. In the middle, there are other scenes still under construction, taken from the Acts of the Apostles: the conversion of St. Paul on the road to Damascus and the arrival of St. Paul in Rome.

For this, work to do is never lacking, including maintenance and cleaning of the scenes built in the past years. “We can access all the spaces of all the scenes, for cleaning and repairs,” Fr. Marco explains. Visitors, on the other hand, are not allowed to leave the route. Under every scene, there is a panel with a reading from the Bible or the Gospel related to that scene. “Obviously not all the visitors are believers or Catholics who attend Church. The children who watch the nativity scene with great curiosity make me smile very often,” Fr. Marco said, sharing, “when they don’t know or understand something, they ask their parents questions. Then the father or mother must necessarily read the caption of the scene, to answer … and who knows how long, maybe, it has been since they … read a page of the Gospel!”

Visitors do not arrive only at Christmas. Apart from 2020, a difficult year due to the COVID-19 pandemic, the “St. Mark’s presepe” remains open every Sunday until Easter, and in the evenings of July and August. Outside of opening days and hours, large groups of visitors can book a visit in advance.

In Fano, there is no lack of tourist attractions, including the famous Roman arch dedicated to the Roman Emperor Augustus, a sort of symbol of the city. There are the city’s ancient defense walls, beaches, small villages in the hills of the countryside and, last but not least, the tasty local gastronomic specialties: fish soup, “piadina”, “moretta” (a spiked coffee with a mixture of liqueurs according to a secret recipe).

Currently, “St. Mark’s presepe” attracts about 15,000 visitors every year. At the exit of Palazzo Fabbri, there is a register where everyone can leave their signature, their city of origin (or country), and a review. If you scroll through the pages of Christmas periods of recent years, you will find France, Spain, Romania, Ukraine, Ireland, Russia, Paraguay, Japan, even the Hawaiian Islands, alongside the main Italian cities. The nativity scene tradition is very alive and famous, especially in Naples. Therefore, Fr. Marco was almost moved when he read in the visitors’ register: “We are from Naples, we are experts in cribs, but we have never seen such a crib.”

In fact, he explained, “I was told that only in Collevalenza, a village in Umbria near Perugia, does something like this exist”. And in recent years, Tripadvisor also has been reporting enthusiastic opinions, such as “simply wonderful” or “You become a child again! I will never stop congratulating everyone .” 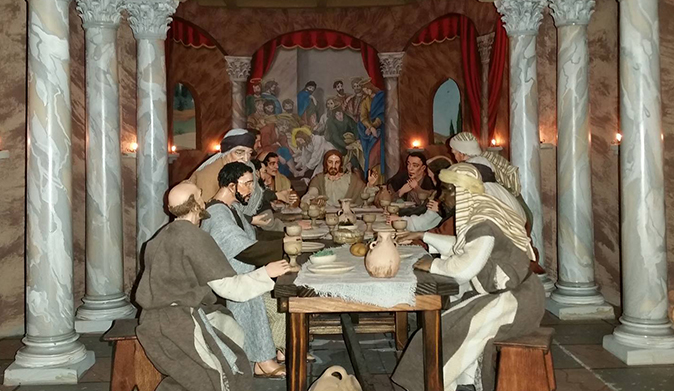 Although the costs of construction and maintenance are considerable, admission is surprisingly free, apart from the offer that is optional at the exit. Even if the offers are always generous, Fr. Marco is fully aware that “you must pay, if you want to follow your passion.” However, the collaboration of his 15 helpers has always been voluntary, even of the painter – Maurizio Romagnoli – who enriched the crib ‘route’ with 200 paintings, also inspired by the Bible. Some banks in Fano also have given their contribution.

The creator dedicates much time to the nativity scene, acknowledging the occasional critical person who says a priest should spend his time doing something more important. But for him it is not time “wasted.”

“The crib made me meet many people, giving me an opportunity to talk about the meaning of Christmas with so many. It gave birth to many relationships,” he noted, adding: “I also receive many letters: in case someone cannot go to Fano, they write to me to ask which scenes I added since last Christmas… This is also an opportunity to send messages of faith.”

Every year, as Christmas approaches, the controversy rises in Italy over the opportunity to set up cribs not only in homes and churches, but also in public places such as schools, prisons, hospitals, since Italy has become a secular and multi-religious country. Fr. Marco limits himself to saying that “as Catholics, we must not retreat. We do not want to impose ourselves, our ideas, our point of view: we must propose ourselves in a serious and convinced way. We must give light to God, not shadows!”

When Pope Francis defended and relaunched the nativity scene tradition, all dedicated to the “St. Mark presepe” did not hide their joy. On Dec. 1, 2019, the pontiff went to Greccio to sign the apostolic letter Admirabile Signum on “the meaning and the importance of the nativity scene.” Pope Francis defined it as “a living Gospel rising up from the pages of sacred Scripture”. The letter encourages not only the family tradition of preparing the nativity scene, “but also the custom of setting it up in the workplace, in schools, hospitals, prisons and town squares.” The pope’s hope is that “this custom will never be lost, and wherever it has fallen into disuse, it can be rediscovered and revived.”

The reason for this papal appeal is not difficult to understand for Fr. Polverari: “I have seen very often, at the St. Mark Nativity scene, people standing still, who did not move, along the path. When I kindly urged them to keep moving, they asked me: ‘let me pray a little.’” 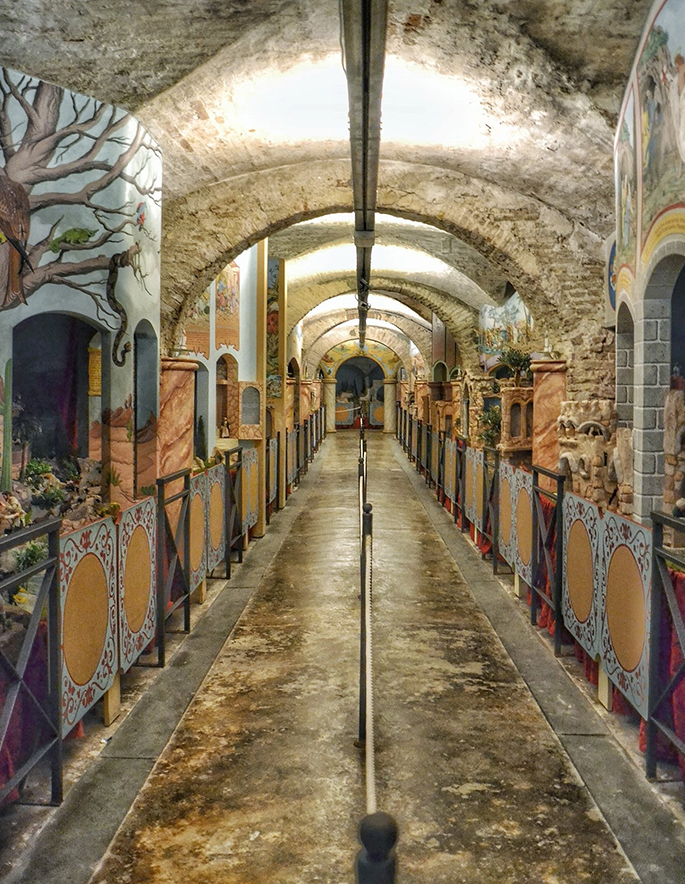 What is the meaning of Pope Francis’ trip to L’Aquila?

We Three Kings of Orient are, Bearing gifts we traverse afar. . . . Who were these gift-bearing kings, these Wise Men of the East? What has their mission meant to Christians across the ages? […]