Sister Gill Goulding, C.J., belongs to the Congregatio Jesu, a religious order of women missionaries who follow the Constitutions of the Society of Jesus, and serves as a professor of Systematic Theology in the Jesuit theologate of Regis College at the University of Toronto. She holds B.A., M.Th., S.T.L., and Ph.D degrees from various British universities, has won several theological awards, and served as a theological expert at the Synod on the New Evangelization in 2012.

The author of several academic works on the theology of Hans Urs von Balthasar, Sister Goulding’s specializations include his 1952 book The Christian and Anxiety (English translation published in 2000) and she recently joined the Balthasar Project of Ignatius Press as an affiliated scholar. On Monday, October 19, on the feast day of St. Paul of the Cross, I interviewed her by telephone about this work of Balthasar as it applies to the Coronavirus pandemic. The following transcript of our interview has been edited for style and length. 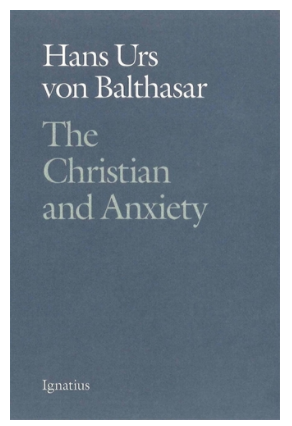 CWR: In a sentence or two, what does Hans Urs von Balthasar teach us in his book The Christian and Anxiety about that topic?

Sister Gill Goulding: In what was originally a 1952 essay, he attempts to re-value Kierkegaardian anxiety so it could be of use to the Christian, illustrating how anxiety rightly understood is a part of Christian existence—and making it possible (as he says on p. 79), for the Christian “to participate in the fruitful anguish of the cross.”

CWR: How does Balthasar understand the concept of anxiety?

Sister Gill Goulding: He opens the horizon of anxiety beyond the merely human. So it’s not just a human phenomenon, but it has a theological dimension, and he integrates human anxiety into the divine relationship. In other words, for him, it would be into the Theo-Drama.

He’s talking about the redemption of human anxiety by integrating it into the paschal mystery, and into Christ’s anxiety in the garden of Gethsemane and when hanging on the cross. So he’s basically reclaiming anxiety from the monopolistic hold that existential philosophy had attempted to place on it—and he returns it to the loving perspective of the Creator.

CWR: How do we apply this theology of anxiety to our current Covid-19 pandemic situation?

Sister Gill Goulding: In a sense, it’s clear that people are anxious during this time, and that that anxiety can take a number of different unhealthy forms—in a sense of increasing addiction, a sense of being overwhelmed by news, a sense of constantly watching television reports, all those sorts of things. I think people can be reassured by the sense that anxiety is something that can help us, in a strange way, to endure our Christian beliefs in the world we live in here and now—we live partly towards the kingdom of God, but not entirely in that situation, as we live in a world torn by sin and division.

So it can help us, I think, to understand our participation in the larger action and ourselves as persons. Anxiety in this sense is not a way of being, or a state of human existence. Rather it can be a powerful and helpful tool through which, ironically, we can seek meaning and understanding.

CWR: So if Balthasar were alive here and now, what do you imagine he would say about Covid-19 from this theological perspective?

Sister Gill Goulding: I think there would be a sense in which he would say that Christian anxiety can transform human anxiety. Through grace, there is a renewed sense of what anxiety is—that it’s a part of the human condition, not something we should fear, but something we can bring to a different level of patience with ourselves and even a sense of joy. On an existential level, there’s a difference between an anxiety that is just let loose rampant and something seen as something being possibly related to the human condition and indeed rooted to Christ’s experience of anxiety.

CWR: If you could pick a patron saint of anxiety for people to seek out in these times, who would it be and why?

Sister Gill Goulding: I have three. Today’s feast is the feast of St. Paul of the Cross, who says somewhere: “Let us throw ourselves into the ocean of God’s goodness, where every failing will be cancelled and anxiety turned into love.” Later, recalling that the Passionist priest Dominic Barberi brought Newman into the Church, and I think his famous poem “lead kindly light amid the encircling gloom” could make him a very helpful patron saint in this time.

And the final one, because I think so many people have been brought to her during this time, is Julian of Norwich. She lived through two waves of the bubonic plague and still managed to have the sense, through her revelations, that all shall be well and all manner of things shall be well. She had a sense of being called to hope in and through those events.

CWR: How do you pray with anxiety in your own life?

Sister Gill Goulding: I take it to the Lord—that’s not to say I don’t pull it back, because I think that’s a common human reality, but I don’t try to bury it. I think it’s very important that we acknowledge it and take it to our prayer, because there’s no other way in which it can become fruitful.

CWR: If you could say one thing to Pope Francis about Balthasar and anxiety, what would it be and why?

Sister Gill Goulding: I think Pope Francis is very influenced already by Balthasar. You can see that in his writings, along with De Lubac and Guardini, both of who were also influenced by Balthasar himself. So I would like to life up the convergences of Balthasar with his latest encyclical, Fratelli Tutti, because it seems to me that one of the things about anxiety is that when it is transformed—not taken away, but transformed—it actually becomes a means of service to others. So there’s a possibility of reaching out to others.

CWR: What is your favorite Scripture passage for anxiety and why?

Sister Gill Goulding: First of all, I think Psalm 42 is helpful, the lament of the people in exile and that constant theme of why are you cast down, my soul, hope in God. I think of the last verse of Matthew’s gospel after the great commission, I am with you until the end of time. And I think of Isaiah 49, around verses 14-15, where we hear that we haven’t been forgotten—a woman can forget her child easier than God could forget us.

CWR: What do you hope people who feel anxious about Covid-19 might take away from Balthasar’s work on this subject?

Sister Gill Goulding: Well, the painful moment of anxiety is part of our human experience. Its place is not to be feared by those who long for meaning and some certainty life. I think it does remind us, once more, of that sense that the whole of our life is given to us by God. Sometimes it seems we can only recognize that when things go well. But the fact is that all of our life, with our anxiety and suffering part and parcel of it, is all one life and therefore to be valued—ultimately to be acknowledged as a gift, but of course in anxiety and suffering we don’t see it like that.

Sister Gill Goulding: I think our horizons will be expanded more, particularly to the most vulnerable, who sometimes are the most anxious. It seems to me that given the state of our common home, this idea of integral human development will grow. I think the interrelated nature of reality and the sense we all share the vulnerability of anxiety and fragility tells us that there’s more to say about creation.

Sister Gill Goulding: It seems to me it’s possible that anxiety can be embraced at a moment where, perhaps, the most important longings and desires of our hearts are revealed—including being frustrated, if that paradox doesn’t sound odd. And I think that anxiety in that way draws us even closer to God and to each other, because God is always closest to us in those moments where we don’t see him and where he seems most distant. For people to have that sense that God’s love does penetrate the darkness and anxiety of sin and suffering. It reminds me very much of the third point of the Contemplatio of St. Ignatius, where God labors, and I would say God labors most in those areas where we don’t see it.

About Sean Salai, S.J. 11 Articles
Rev. Sean M. Salai, S.J., writes as a special contributor for America Media. He is a doctoral candidate in evangelization and media at The Catholic University of America, an author of multiple books on Pope Francis and Ignatian spirituality, and a former newspaper metro reporter.