Growing up in a Polish household, there were two Catholic giants who dominated my imagination and living room wall: Pope John Paul II and St. Maximillian Kolbe. The first graphic novel I remember reading was about Fr. Kolbe’s thrilling life story.

Thus, I was excited when Polish-Catholic film company Kondrat, fresh off the success of their Faustina biopic, announced a new presentation of his narrative, titled Two Crowns. While not nearly as sophisticated as their previous efforts, it still presents a competent portrayal of a saint that even many non-Catholics will find irresistible. 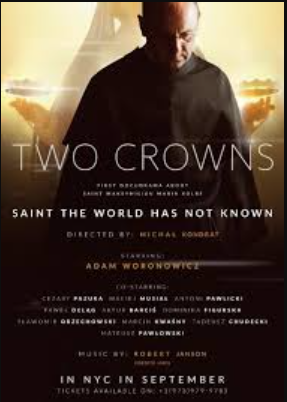 As a young boy at the end of the 19th century, Maximillian was bright and inquisitive, especially about religion. Years later, he would reveal that he had a Marian vision around the age of eight, when Our Mother presented him with two crowns: a white crown of majesty for purity and a red crown of thorns for martyrdom. “Which do you choose?” she asked. “I choose both!” Kolbe cried with boyish enthusiasm. Sure enough, he entered the Franciscan order and devoted his life to the service of God through Mary.

Seeing a special need for spiritual warfare to combat the modern era, Kolbe began an organization called the Militia Immaculata along with a regular magazine. He had no printing press or journalistic experience, but felt it is God’s will, so he plowed ahead. Soon, his publication was publishing thousands of copies a month all over Poland.

His next venture was even more outrageous: starting a mission in Japan. “Do you know anyone in Japan?” his bishop asks. “No,” Kolbe admits. “Do you speak Japanese?” “No.” It does not matter; he goes anyway. To everyone’s surprise, the Nagasaki mission is a success and continues to this day. This was the most interesting part of the film as many people, including myself, had little knowledge of this part of his life.

Kolbe’s mystical side is also on display when he builds a church on the outskirts of town behind a hill. The location seems terribly misplaced until the atomic bombing several years later. The building and its people are protected, like the house built on the rock, allowing the friars to minister to the war-torn town in following months.

Of course, the most significant and famous part of Kolbe’s life was his seventy-seven days as a prisoner at Auschwitz. Amidst the horrors of the death camp, Kolbe continued his priestly vocation, bringing hope to Catholics and non-Catholics alike. He volunteered to take the place of a fellow prisoner who was condemned to death and in doing so earned his martyr’s crown. The man he replaced survived the Holocaust and attended Kolbe’s canonization.

Unlike Faustina, Two Crowns is rough around the edges. The acting, especially Adam Woronowicz’s performance in the title role, is lackluster. Worst still is the sound design. The film is rather poorly dubbed, and the ambient noise is all over the place. Frankly, it feels like an unfinished project. Despite this, Kondrat’s style of parallel editing between the dramatization and real-life interviews with current Immaculata members is still compelling.

When American forces liberated the Mauthausen concentration camp in 1945, they discovered the following phrase scribbled on the walls of one of the barracks: “Wenn es einen Gott gibt muß er mich um Verzeihung bitten”: If there is a God, he must beg my forgiveness. This proverb, and the Holocaust in general, has been used by skeptics as ultimate proof of God’s absence.

Yet in that same darkness, Fr. Kolbe shone the light of the gospel. Christians have a faith that is born from torture and death of Jesus, the most terrible crime imaginable. God is not insensitive to our suffering but endures it – leading us to His own Resurrection. Kolbe’s legacy continues in our own time of struggle. He is a saint for the ages, and a saint for right now.