I knew Thomas Howard a lot longer than he knew me. As an Evangelical Protestant, I had been reading his articles for many years in Christianity Today, a magazine that was standard reading fare in the home where I grew up. I got my own subscription as soon as I went to college, and read it faithfully for many years thereafter. But in all those years, one article still stands out from all the others. It was 1985. I will never forget the headline: “Well-known Evangelical Author Thomas Howard Converts to Catholicism”. It was the first of a three-parter devoted to what was an earth-shaking event in Evangelical circles. And I don’t think I can recall being more unsatisfied with anything I’ve ever read. I was shocked. I wanted to know how and why this had happened. I had a thousand questions, and nothing that I read there – including even an interview with Howard – provided adequate answers. 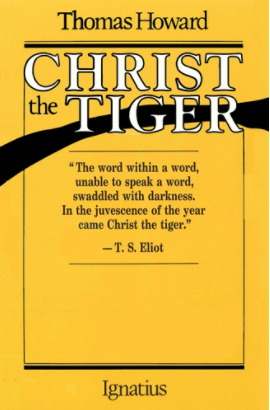 This was Thomas Howard! He came from Evangelical royalty. His grandfather was one of the foundation stone layers of what we call Evangelicalism, the Reform of the Reformation: a gathering of Protestants who affirmed the inerrancy of Scripture, Christian morality, intellectual integrity, and would teach it in their colleges, while on the one hand the Liberal Protestants (and their colleges) were lapping up worldly scag, and on the other the Fundamentalists (and their colleges) were going off the deep end in shallow-headed self-caricature.

This was Thomas Howard! His older sister was the legendary Elizabeth Elliot, widow of a missionary martyr.

This was Thomas Howard, and it was simply impossible that he had become Catholic.

Twenty years later, I walked into Howard’s Rockwellesque New England home and sat as a guest at his table. By that time I had completed my own arduous and unexpected – and similarly impossible – journey to the Church of Rome. Along the way I had read Howard’s books about becoming and being a Catholic. I had known him for over 30 years, but now – something that I also never would have imagined happening – he was getting to know me.

We connected immediately on all levels. It often happens with fellow converts, but it is always a surprise and always sublime. With Thomas Howard, it was especially sublime, because to be in his presence was to be immersed in crystal clear thinking revealed in equally sparkling language. He could comfortably use words like ebullient and also be ebullient.

So many English professors only manage to use the language they absorb from literature as a form of torture on their students and the rest of the world. Maybe they’ve just made poor reading decisions. Thomas Howard read the right stuff, and it came through him even more highly refined.

He was so articulate and witty and sophisticated without being in the least pretentious, and I just wanted to keep asking him questions and listening to him talk. But he was as genuinely interested in hearing what I had to say. It didn’t hurt, of course, that I had a certain well-known affinity and passing familiarity with G.K. Chesterton. There are many who wrongly include Chesterton with the Inklings, that lively group of Oxford writers who drank together and read each other’s books and discussed Christianity. But Chesterton was a generation older, and while they all had read Chesterton and were indebted to him in their thinking, he didn’t know any of them.

Except perhaps for one. Charles Williams had contributed a few pieces to G.K.’s Weekly, the paper that Chesterton edited. Thomas Howard said, “one could draw a line from almost any sentence in Chesterton to any sentence in Lewis, Tolkien, and Williams, and find a glorious connection.” But Williams was sort of an odd man out in the Inklings. Didn’t even have a university degree. And unlike the wildly popular C.S. Lewis and J.R.R. Tolkien, Williams’ books have had a limited appeal, and some find them, frankly, baffling. But Thomas Howard did his doctoral thesis on Williams and was generally considered the expert on his writings. It was profound fun to compare notes on our two specialities, which we continued to do in our correspondence and in the other (all too few) times we were together.

At the time I met Howard, I had read only two Williams novels, and I confessed to being among the baffled. I asked him what All Hallows’ Eve was all about exactly. He said it was about two women who were “loitering in the murk that lies just on the far side of death.” They’ve been given the opportunity to enter into eternal happiness, but they’re still clinging to their selfish irritation with each other. Something that “might tempt any unprepared and suddenly-dead person.” Brilliant.

Of course, it was even more fun to hear him talk about his personal relationship with C.S. Lewis, with whom he’d started a correspondence in the 1950’s. He showed me Lewis’ first letter to him. (He had donated the rest of the letters to the Wade Center at Wheaton College.)

It was Chesterton’s The Everlasting Man that had been largely responsible for leading C.S. Lewis to Christianity. And it was this book that also had a lasting influence on Howard. He said it was his first nudge towards the Catholic Church.

Both C.S. Lewis and Charles Williams compared Christ to a lion. But G.K. Chesterton and Thomas Howard compared him to a tiger. Chesterton says that when you make the claim that God is a reality – like a tiger – a reason for changing your life, the modern world will try to stop you if it can. Prepare to be opposed.

In 2009, we were fellow speakers at a regional Chesterton conference in Rochester, New York. The gentleman who introduced him was also a convert, and he mentioned reading that same article in Christianity Today that I had read in 1985. His reaction had been different from mine; he had obviously been farther along on his journey. He had said to himself: “If Thomas Howard could become a Catholic, that means it is possible that I can, too.” Suddenly, it made sense to me. I thought it was impossible that Thomas Howard – or anyone else, especially me – would deliberately become Catholic. But later I would reach the point that even if I was starting to feel so inclined, it seemed impossible that I could ever become a Catholic. And yet, other people actually had done it. Thomas Howard had done it! And he would demonstrate that it was the most natural, obvious, and reasonable thing in the world, even if the whole world thought you were crazy.