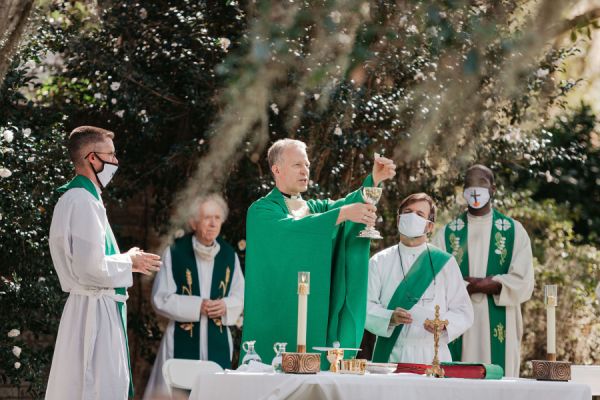 Denver Newsroom, Oct 16, 2020 / 03:01 am (CNA).- At a Mass on Monday said in thanksgiving for the cause for canonization of the martyrs of Spanish colonial Florida, the Bishop of Pensacola-Tallahassee emphasized that martyrs were not just in the Old World, but in what is the United States as well.

Bishop William Wack said Mass Oct. 12 in Tallahassee to observe the fifth anniversary of the opening of the cause of Antonio Cuipa and his companions.

Antonio Cuipa was a member of the Apalachee people of the Florida panhandle, who largely embraced the faith from Franciscan missionaries.

In 1704, militias from the English Carolina colony massacred the Catholic Apalachee. Thousands were taken as slaves, and another thousand were martyred.

Martyrs were tied to the stations of the Cross and burned alive, while they invoked the Blessed Virgin. In addition to the 1,000 Appalachee martyred, six Franciscans died for the faith, including Juan Praga and Manuel Mendoza.

Antonio Cuipa, a catechist, was killed Jan. 26, 1704, tied to a cross and burned alive. When he cried out from the cross near the end of his life, an apparition o f the Blessed Virgin reportedly attended to him.

“We don’t have to look across the world at the Holy Land or Colosseum to find martyrs. We have our brothers and sisters right here who gave their lives for Christ,” Bishop Wack said in his homily.

“May we keep the faith alive that many more people know God’s goodness through them,” he added.

The Mass was said at the site of a planned shrine to the martyrs of Spanish Florida.

The cause for canonization is investigating 54 events of martyrdom. The cause includes more than 60 Native Americans, 17 priests and religious, and seven Spanish laypersons.

The first martyrs of La Florida were three Dominican missionaries, clubbed to death in 1549. They were to be joined by many Franciscans and indigenous peoples, as well as Jesuit missionaries, who were killed as late as 1761.

The petitioners in the cause for canonization are the board of the Martyrs of La Florida Missions, which is working to build the shrine.

Michael Sheedy, vice president of the Martyrs of La Florida Missions Board, told CNA, “I’m thankful that we are rediscovering this incredible history of this period in the United States, and to grow up here, where centuries ago before we had a country  … there were people who were living vibrantly the Catholic faith and ultimately gave their lives for it,”

He added that Antonio Cuipa “was a fearless evangelist” who “had great patience and zeal that brought countless natives to ask for baptism.”

Following the Mass, Chris Stavres, president of the Martyrs of La Florida Missions Board, read from Antonio Cuipa’s will, which set aside funds to support places of pilgrimage in the Holy Land.

The cause for canonization is in the diocesan phase, with information being gathered to be sent to Rome.

Sheedy said there are historical documents of the martyrs, including records from Clement XI and Philip V of Spain, who declared a feast day for the martyrs of La Florida in 1743. Sheedy added that that it is likely the cause will soon progress to the next stage.

Sheedy said this is an important project for the Church in Florida and the southeastern United States, because of its ties to the history of the land. He said it also contradicts popular claims about Spanish colonial imperialism, noting that these Native Americans were not forced into the faith but willingly gave their lives out of love for Christ.

“It does serve as a source of inspiration and encouragement for those of us who have followed them …  that there are others who have walked this journey ahead of us who confronted great challenges and persevered. Somehow that gives us hope, encourages us, and inspires us to continue.”

Washington D.C., May 18, 2018 / 04:15 pm (CNA/EWTN News).- Demographic reports indicate that the U.S. birth rate is at a 40-year low, with significant declines among Hispanic women. That low birth rate could mean declining Mass attendance because coupl… […]