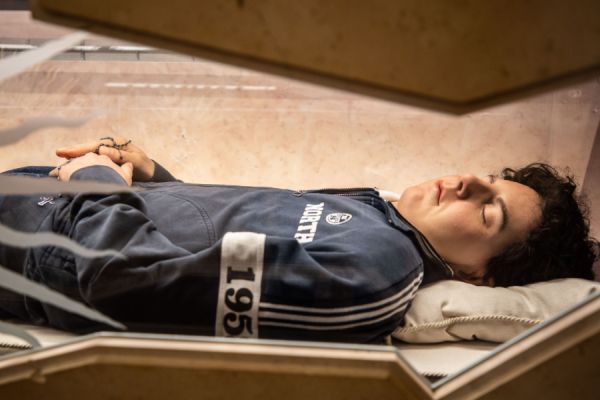 Rome Newsroom, Oct 16, 2020 / 06:30 am (CNA).- Fifteen-year-old Carlo Acutis died within a week of being diagnosed with acute promyelocytic leukemia, offering his suffering for the pope and for the Church. Following his beatification last Saturday, his doctors and hospital chaplain recalled their memories of his final days.

Fr. Sandro Villa was the hospital chaplain of St. Gerald Hospital outside of Milan who gave Acutis the Anointing of the Sick and Holy Communion on Oct. 10, 2006, the day before Acutis went into a coma due to a brain hemorrhage caused by the M3 subtype of acute myeloid leukemia.

Villa shared at an event in Assisi Oct. 13 that he was touched by Acutis’ “composure and devotion” in receiving the sacraments in the hospital room.

“In a small room, at the end of the corridor, I found myself in front of a boy. His pale but serene face surprised me — unthinkable in a seriously ill person, especially an adolescent,” he said.

“I was also amazed by the composure and devotion with which, albeit with difficulty, he received the two sacraments. He seemed to have been waiting for them and felt the need for them.”

Before his cancer diagnosis, Carlo Acutis had a great devotion to the Eucharist. From a young age, he expressed a special love for God, even though his Catholic parents had stopped attending Mass.

As he grew older, he started going to daily Mass, often dragging his family members along with him. He made Holy Hours before or after Mass and went to confession weekly.

With his aptitude for computer programming, Acutis built websites to inform others about Eucharistic miracles and Marian apparitions around the world. On his site, he told people, “the more often we receive the Eucharist, the more we will become like Jesus, so that on this earth we will have a foretaste of heaven.”

For Villa, this administration of the sacraments would be his only encounter with Acutis, but he said that the look of serenity on Carlo’s face was something that stayed with him.

“After a few years … I learned that he was declared ‘Venerable.’ I was amazed that the Lord had allowed me to meet him, if only for a few moments,” he said.

Villa continued: “I decided to learn about his life. I discovered that he was in love with the Real Presence of Jesus in the Eucharist, and I therefore began to better understand some of his words.”

Dr. Andrea Biondi and Dr. Mòmcilo Jankovic, who treated Acutis in the pediatric clinic of St. Gerald Hospital, recorded their memories together in a paper that was read aloud at the event.

They said: “Carlo was like a meteor with a quick passage through our ward; leukemia took him away before we could get to know him even a little. However, his sweet eyes remain engrained [in our memories]. His gaze was full of attention … of courage, of love, of strong empathy.”

“His faith in God, which he had wanted and still wanted to pass on to others, to his neighbor, shone through him … His gentle eyes … taught us a lot: life, whether short or long must be lived intensely for oneself, but also and above all for others.”

Acutis’ heart stopped beating on Oct. 12 — a date which is now celebrated as a local feast in the Diocese of Assisi and Archdiocese of Milan. His parents had desired to donate his organs, but they were too compromised by leukemia to be donated.

Today Blessed Carlo’s heart is considered a relic and is contained in a reliquary in Assisi that is inscribed with his words: “The Eucharist is my highway to heaven.”

‘We had no idea’: The hidden life of the reputed stigmatist tortured by Stalin’s secret police

CNA Staff, Nov 25, 2020 / 06:00 am (CNA).- Sr. Wanda Boniszewska led an extraordinary life. The Polish nun was a reputed stigmatist tortured by Stalin’s secret police. Her spiritual journal, published after her death in 2003, recorded her astound… […]