It is tempting to use Jose Luis Olaizola’s Bartolomé de las Casas: Chronicle of a Dream as a backdrop for yet another look at the history of the relationship between ethnically European Catholics and non-European races. Its topic, after all, is the life of a man who was part of Spain’s earliest efforts to establish colonies in the Americas, then joined the Dominican order, became one of his nation’s best known defenders of the colonies’ native populations and has had his cause for beatification opened by the Catholic Church. 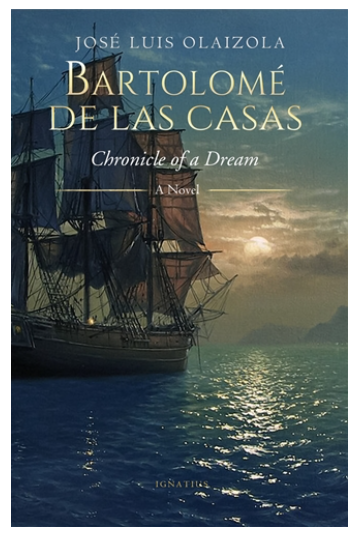 Much in the book is certainly timely, and there is much that further demonstrates a long history of Catholic benevolence towards non-European races without denying instances in which European mistreated the latter. One important point this novel stresses is the fact that Spanish colonists are a poor yardstick for measuring the attitudes of their contemporary countrymen as a whole. Colonists were not the same people as Spain’s political rulers and leading clergymen, who hoped that colonization would lead native populations into the Church, to a more civilized way of life and to become partners in a multi-racial Catholic empire. Laws were promulgated to assure just treatment of native populations, government officials sent to the colonies instructed to enforce them. That was the “official” theory.

Unofficial practice was a different matter, with attempts to implement the desires of the Spanish government never more than partially successful. Colonial ventures tended to attracted the least savory elements of the Spanish population. Often the impecunious, cavalier sons of lesser gentlemen or rough sailors, many colonists were focused on schemes to get rich quick—regardless of at whose expense they built their own wealth. Mistreating native populations for the sake of greed or out of general sadism, they were perfectly content to kill, maim and steal from fellow Spaniards when this served their purposes. At times groups of such men even fought small scale battles against each other. Men of such dispositions were naturally those most likely to hold racist views, but there was also an extent to which Indians were more likely to suffer merely because they were more vulnerable, with their deaths less likely to bring retribution from rival colonial factions and their military technology inferior.
​
Attempts to use the life of de las Casas (1484-1566) as a context for a broader analysis of Latin America’s colonial history are, however, hampered by the fact that the merits of his intentions exceeded those of some of the steps he took to act on them. His portrayal of the behavior of Spaniards in the Americas did not set out to record the fullness of colonial life but to persuade the government to correct very real abuses—abuses whose consequent predominance within de las Casas’s literary output can make them seem virtually universal rather than “merely” all too common.

On some key matters the information available to him was highly inaccurate. When analyzing others he was forced to rely upon educated guesses that more precise research has shown to be erroneous. Both facts further contributed to his painting a picture more vile than the often horrid reality. In the short term this provided greater motivation for the humane Spanish leaders of his day to try reining in serious evils. In the long term it has made it easy for enemies of Catholic civilization to find ammunition within de las Casas’s writings.

There is, however, much more to de las Casas’s life, and to Olaizola’s book, than correctives to and unintentional sources of contemporary misunderstanding of history.

The external aspects of de las Casas’s life are firmly documented. The son of one of the first Spaniards to travel to the Americas in the years immediately following Columbus’s voyage of discovery, and having spent his childhood in the port city of Seville, de las Casas first traveled to what was then called the West Indies during his teenage years. Though he abandoned studies for the priesthood in order to do so, his decision, ironically or providentially, eventually led to his ordination, entry into the Dominicans and elevation to the episcopate. By the time he left Spain, his clerical studies allowed him easy entrance into the most influential circles among the colonists. As clergymen of the time playing a key role within such circles, de las Casas’s association with them actually contributed to his eventual decision to pursue ordination before a fuller conversion finally induced him to become a friar.

What I found most interesting about its contents was the window they provided into matters de las Casas largely left aside in his own works, those concerned with his own life story and the broader history of colonial Latin America. Much of Chronicle of a Dream concerns the development of a man’s interior life of faith. Since the book is a novel fictitiously presenting itself as an “autobiography” the details it gives of de las Casas’s inner spiritual development probably includes a dose of plausible speculation based upon a combination of the known facts of his life with the general tendencies seen in those whose interior lives are.

But whatever departures from strict accuracy might be found in it, the book would seem to be at least as loyal to the broad reality of de las Casas’s spiritual growth as many lives of the saints and presents the nature of inner life with a realism refreshingly different from the mawkishness found in some contemporary Christian fiction.