As Catholics, we know that death is not something to be feared. “Death is swallowed up in victory,” wrote St. Paul to the Corinthians, “O death, where is thy victory?” (1 Cor 15). We have been given the means to prepare for death,  and if our souls are prepared, death is a birth into eternal life. We even celebrate the feast day of most saints on their day of death, which we rather paradoxically call their dies natalis (day of birth), their birth into eternal life. Yet there is so much about death that we don’t think about, or maybe don’t want to think about. A new book by Dr. Scott Hahn takes up the challenging and important topics of death, resurrection, and the life hereafter. 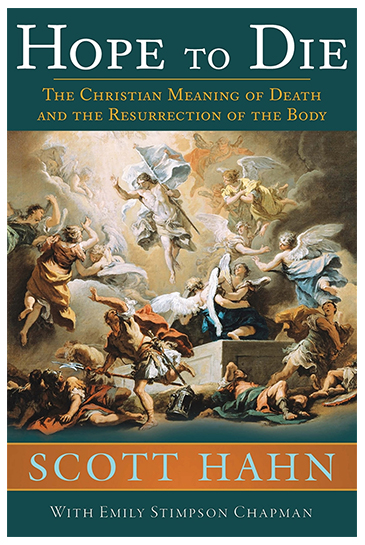 Hope to Die: The Christian Meaning of Death and the Resurrection of the Body was recently published by Emmaus Road Publishing and was written with Emily Stimpson Chapman. Dr. Hahn, of course, is a profoundly prolific author and speaker, having written numerous books, including The Lamb’s Supper: The Mass as Heaven on Earth, Reasons to Believe: How to Understand, Explain, and Defend the Catholic Faith, and Rome Sweet Home: Our Journey to Catholicism (co-authored with his wife, Kimberly), among many others. Chapman has written several books, including The Catholic Table, The American Catholic Almanac, and The Catholic Girl’s Survival Guide for the Single Years.

Hope to Die was in the process of being printed when the COVID-19 pandemic struck. Dr. Hahn and Chapman composed an additional chapter, a Postscript, titled “The Hour of Death,” which addresses the pandemic within the context and through the lens of the book.

Dr. Hahn recently corresponded with Catholic World Report by email about this new book, discussing what it means for Catholics to be hopeful about death, the resurrection of the dead, the Eucharist in the context of eternal life, and the COVID-19 pandemic.

CWR: How did the book come to be? What prompted its writing?

Scott Hahn: Over a year ago, I was invited to go to Manhattan to talk about the Church’s understanding of death and burial before a small group of about 15 people. The group included chaplains, ethicists, clergy, and lay people. It’s not a topic I’d addressed much in the past, and I don’t know why I said yes. But I did, and the presentation went far better than I expected.

That got me to wondering if this might not be something more than just an evening talk. As I looked around, I saw a real need to elevate our understanding of life and death. I also saw a need to address our culture’s widespread recourse to cremation. I didn’t want to open up another front on the culture war, but I did see a need to address this matter, since so many Catholics are confused about it. Finally, and most importantly, it just seemed like a frank discussion of how Christians are called to approach suffering and death seemed necessary, given its inevitability.

So, that was my purpose. What was God’s purpose? That’s a different matter. I certainly didn’t foresee the virus when I began the book, but God did.

CWR: The book was written with Emily Stimpson Chapman. How did the two of you get connected, and what was the collaborative process like for this book?

Hahn: I’ve known Emily for almost 20 years. She was one of my students at Franciscan and, while she was in graduate school, was probably the most over-qualified assistant I ever had. Since then, she’s worked on many projects with my apostolate, the St. Paul Center and become an author in her own right; we publish three of her books. Much of her work has focused on expanding our understanding of John Paul II’s theology of the body beyond the area of marriage and sexuality, so this seemed like a natural collaboration, as, in many ways, this book is a further extension of the theology of the body, looking at how we see the body in light of Christ’s life, death and resurrection.

As for the process, over the course of many months, Emily and I, along with the St. Paul Center’s Vice-President for Academic Programs, Rob Corzine, and occasionally, Emily’s infant son, got together to hash out the book chapter by chapter. As the primary author, I guided the direction of the book, but Emily brought so much to it. If you’ve sat in on any of my classes, the way this content unfolds will be familiar to you. If you’re familiar with Emily’s work, you’ll see her mark. It was a duet, not a dictation, and I’m proud of that.

CWR: Can you explain the title? What role does Christian hope have when it comes to death?

But the title itself—Hope to Die—reflects St. Paul’s words, “For me to live is Christ, to die is gain.” We need to cultivate the virtue of hope in order to face death with the same attitude. Having hope about our death and the deaths of those we love is longing to enter into glory. Because of that, the book really is as much about heaven as it is about death and dying.

CWR: The book is certainly, and unfortunately, particularly timely right now, because of the COVID-19 pandemic throughout the world. How do you think this book speaks to the current situation?

Hahn: Death is always present, but we’re good at not thinking about it. It’s a hard reality to grapple with, and so it’s easier to just ignore the reality of our own deaths and what comes after for as long as possible. But, that’s a dangerous decision. So, the book as a whole invites the reader to face the reality of death, so that we can have the fullness of life, both now and in eternity. That invitation, I think, is a particularly powerful one at a time when we’re being confronted with the vulnerability of our physical life, because it can help us see that spiritual life is even more vulnerable.

Also, as you mention, we tackle some of the fears and struggles the pandemic has raised in the post-script. We were just finishing up the edits on our page proofs, when the pandemic struck, so I made the call to stop the presses and add a new concluding chapter. Too many of us have a weakened fear of dying a spiritual death through mortal sin and a weakened hope of what awaits us in glory. While the whole book aims to strengthen that fear and that hope, the final chapter dives into that more explicitly in the context of Covid-19.

CWR: Catholics are often accused of being obsessed with death. We venerate relics; we celebrate saints’ death days as (often) their feast days; we have the corpus on the crucifix, rather than a bare cross. But is this focus on death important?

Hahn: Catholics are accused of being obsessed with death, but we’re not. What we’re obsessed with is resurrection. So much so that when St. Paul preached in Athens, the philosophers thought he was preaching two new gods, Jesus and Resurrection. Our acceptance of death, our preparation for it, strikes people who have a disordered fear of death as obsession. But we recognize that life is not ended with death; it’s changed for the better. Death is the gateway to that something better. So, of course we want to help people prepare for their death as best as they can and celebrate the deaths of those we believe have entered into glory. That’s not obsession. That’s right priorities.

CWR: What is your hope for the book? How are you hoping to help your readers?

Hahn: In the book, I share the words of the sixth century bishop St. Julian of Toledo. He wrote:

Everyone fears death of the flesh, few fear death of the soul. All are preoccupied with the coming of death of the flesh, which sooner or later, certainly must come. And for this they weary themselves. Destined to die, humankind struggles to avoid dying, and yet, destined to live forever, they do not labor to avoid sinning … Oh that we could incite humankind, ourselves included, to be lovers of everlasting life as much as they are lovers of the life that passes away!1

So, that’s my hope for the book: to encourage more people to be lovers of everlasting life.

Hahn: One thing I haven’t mentioned yet is the Eucharist, and that’s something we explore at great length in the book. The Eucharist is the sacrament of Christ’s Body, Blood, Soul, and Divinity, but the Body whose presence we celebrate is His resurrected body. Yes, it’s the same body that was in the Upper Room, on the cross, and in the tomb. But the actual condition of Christ’ body now is in heaven, in glory. It’s not just a resuscitated corpse. It’s been transformed. And it’s that transformed body we receive in the Eucharist. In the Mass, Jesus’ resurrected, glorified, deified humanity becomes communicable, distributable, and edible for the purpose of our deification, fulfilling the promise, “He who eats my flesh and drinks my blood, I will raise him up on the last day.

Ordinary food we assimilate to our body. But when we receive this food, Christ assimilates us to His body. Our mortal flesh is united to His immortal flesh, so that what is sown perishable, is raised imperishable. This is the hinge on which all of salvation history and our individual lives turn.

On June 12, Bishop Thomas Paprocki of Springfield, Illinois issued a decree regarding same-sex “marriage” (SSM) and “related pastoral issues”.  In it, he reaffirmed traditional Catholic teaching that marriage can only be “a covenant between one man […]

On great exemplars of authentic manhood