In feeding the hungry of Chile, beloved friar’s legacy lives on

Following the friar’s example, dozens of volunteers at “Friar Andresito’s Soup Kitchen” help feed the poor and homeless, including those facing addictions and prostitution.

She said working with the poor has changed the way she viewed them. “Although in the beginning one has a certain amount of fear because there are a lot of alcoholics, a lot of drug addictions, they’re people who need a lot of love, for someone to listen to them.”

On Sundays, he would distribute fruit and bread to the poor, an activity that today inspires “Friar Andresito’s Soup Kitchen.” 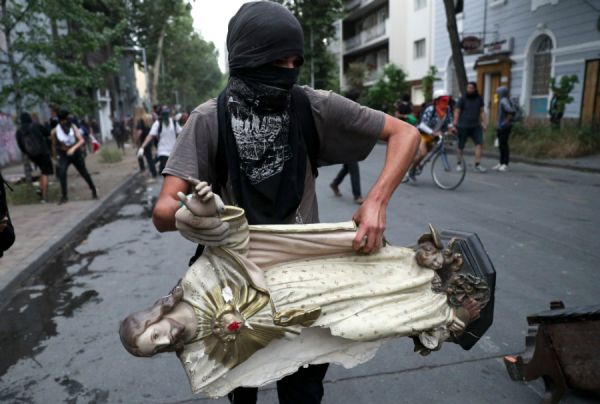 Santiago, Chile, Nov 12, 2019 / 11:01 pm (CNA).- Several churches across Chile have been attacked and looted amid anti-government protests in the country.

The demonstrations began in mid-October in Santiago over a now-suspended increase in subway fares.
Other regions joined in the protests, expanding their grievances to inequality and the cost of healthcare.

Protesters broke into Santiago’s La Asuncion parish Nov. 8, hauling out pews, confessionals, and statues – which they defaced – to build a barricade. They set the barricade on fire before clashing with police, and sprayed anti-Catholic graffiti on the walls, pillars, and altar of the church.

The next day, the Chilean bishops said that “with many Chileans we are radically opposed to injustice and to violence, we condemn them in all their forms and we hope that the tribunals will identify those responsible and sanction them.”

“The violent protesters only prevent us from looking with due attention to the just claims of the majority of the Chilean people who yearn for real and peaceful solutions … the people are not only tired of injustice, of also of violence, and the great majority hope for dialogue with respect to the reconstruction of the social fabric.”

On Nov. 10, attackers in Talca forced open the doors of the Mary Help of Christians shrine, where they destroyed religious  images and then carried them into the streets along with the church’s pews to set them on fire and erect barricades. Before the Carabineros de Chile arrived at the scene, the attackers desecrated the tabernacle.

At a Nov. 12 press conference, Fr. Pedro Pablo Cuello, director of the Salesian presence in Talca, said that “Chile needs to grow, needs to be reconciled, with peace, with justice and equity … This is a desecration of the very face of Jesus.”

Bishop Galo Fernández Villaseca, auxiliary bishop of Santiago and apostolic administrator of Talca, said he was “impacted and moved by the violence one is experiencing which is intensifying  in the country and among us. These are not just material damages, it’s an attitude of discord and which attacks the deepest sentiments of a person, our religious sentiments. The desecration of the Blessed Sacrament hurts us deeply.”

He encouraged the practice of “peace, dialogue, to value what is true in the different person and to walk down a path that means progress for all women and men in Chile.”

The Salesian community in turn asked that Chileans “seek peace and the ways of understanding and dialogue … convinced that the great challenge of every society is to achieve a good integration in which all people have a decent life, especially the elderly and children.”

“It’s a matter of respecting one another, of working together. We all want to build a new Chile, a Chile truly just and solidary and we will continue working according to our responsibilities as priests and as a Salesian School,” they said.

Bishop Fernández said a Mass of reparation in the church Nov. 12.

Also on Nov. 10, a mob attacked Our Lady of the Angels parish in Viña del Mar, immediately northeast of Valparaiso.

The attackers pulled out statues of Saint Expeditus and Saint Teresa of the Andes from their glass enclosures and destroyed them. They also destroyed some stained glass windows and other windows, sprayed graffiti, and tried to enter the church.

“This violent action hurts us deeply since the Shrine of Saint Expeditus has always been a refuge for those who suffer and need a place of peace and hope. Not only has a sacred image been broken, but also the home has been violated that welcomes thousands of pilgrims who with faith give over their yearnings and hopes,” the parish said.

Along with expressing their support for the legitimate demands of society, the parish condemned the vandalism and violence and said it is “time for a true constructive dialogue and to seek paths of unity for all of us who live in this land.”

In recent days, the Cathedral of St. James in Valparaiso and Saint Teresa of the Andes parish in Punta Arenas have also been attacked.

More than 20 people have been killed in the protests. Many of the protests are peaceful, but some have included looting and arson, and attacks on public and private property, national heritage buildings, and churches. More than 7,000 demonstrators have been arrested.

President Sebastian Pinera replaced several cabinet ministers last month, but it did not sate the protesters.