As anyone who’s visited Europe in the past 30 years knows, Islam is becoming more visible throughout the Old Continent. That presence isn’t as large as some believe. In 2016, the estimated Muslim population of Europe was a mere 4.9 percent. In particular countries, however, the Muslim populace is larger. Approximately 8.8 percent of France’s inhabitants, for instance, identified as Muslim in 2016. 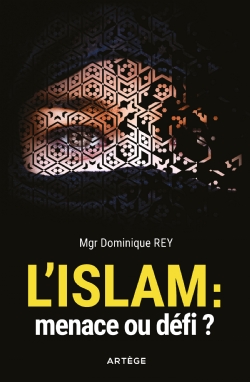 In many ways, France is a bellwether concerning Islam in Europe. Muslims have lived in France for many decades. In 1926, the Great Mosque of Paris was opened to accommodate Muslims from France’s colonial empire working or studying in Paris. After World War II, labor shortages in mainland France resulted in Algerians, Moroccans and Tunisians becoming migrant workers. Though expected to return to North Africa, many never did. Thousands of their grandchildren live in France today.

The distribution of Muslims throughout France is also uneven. Above-average numbers live along the Mediterranean coastline in cities like Marseilles and Toulon. That surely played a role in the decision of the Catholic bishop of Fréjus-Toulon, Dominique Rey, to write a fascinating book about Islam. By Bishop Rey’s reckoning, up to 25 percent of the population in parts of his diocese are Muslim.

The key to understanding Rey’s L’Islam: menace ou défi? [Islam: Menace or Challenge?] is that it is more about Christianity than Islam. Certainly Rey demonstrates deep knowledge of Islam’s varying manifestations, ranging from the jihadist fundamentalism that’s produced no-go areas for French police and multiple terrorist acts, to those Muslims for whom Islam is largely a cultural heritage. To speak about Muslims in monolithic terms, Rey states, is highly misleading.

But Rey is more concerned with how Catholics respond to Islam’s growth throughout Europe. For him, Islam functions as a mirror into which Christians can gaze and discover much about what ails the Church. And central to the response advocated by Rey is the need for Catholics to deepen their knowledge of their faith, be unembarrassed by its truth-claims, and live their lives accordingly.

That knowing and living one’s faith, sans complexe, as the French say, is central to how Rey thinks Catholics should approach Islam won’t surprise those familiar with contemporary French Catholicism. Bishop Rey is a leading representative of the type of dynamic orthodoxy that increasingly characterizes those parts of the Church flourishing in France today.

These developments are detailed in Yann Raison du Cleuziou’s recent analysis of post-1960s French Catholicism, Une contre-révolution catholique (2019). They involve rejecting the progressivist accomodationism that (like everywhere else) proved a spectacular failure in France after Vatican II. But Rey’s style of Catholicism also eschews integralism and fortress mentalities. Instead the Catholicism with which Rey is associated involves people joyfully and unapologetically living their faith in the world and acting upon their beliefs in the public square, without claiming some type of privileged place in French life. In places like Rey’s diocese, it’s produced numerous vocations and vibrant lay communities.

This background shapes Rey’s reflections about Islam’s presence in France, including many native-born Muslims’ turn to aggressively Islamist positions. “Nature abhors a vacuum,” Rey reminds his readers. If Islamism is the only alternative presented to the cynicism and technocratic mindset which dominates much of France’s elites, one shouldn’t be surprised that some French Muslims find Islamism’s totalistic approach to life attractive. Put differently, if Catholics can’t—or won’t—give “a reason for the hope that is in you” (1 Peter 3:15) or reduce the Gospel to mere NGOism, evangelization inevitably collapses. Inter-religious discussions between Catholics and Muslims, Rey specifies, can only be meaningful if the Catholic participants are clear about what they believe and why. That means believing what the Church believes—not what people read in Libération or Le Monde over breakfast that morning.

Such knowledge is important for understanding how Catholics and Muslims think about the temporal and spiritual orders. The temporal-spiritual distinction, Rey stresses, is absent from Islam. This raises hard questions about how believing Muslims will adapt to the ways in which Western societies configure the relationship between religion and politics.

But if Catholics want to discuss this topic with Muslims, they need to specify that Catholicism’s distinction between the temporal and spiritual doesn’t require Christians to jettison their faith upon entering the public square. It simply means that Christians don’t see church and state as politically or juridically coterminous, understand that there are both absolute and prudential limits to what the state may do vis-à-vis religious belief and practice, and recognize that public arguments addressed to all citizens should be presented on the basis of reason.

This issue of the state’s relationship to religion invariably features in especially sensitive debates surrounding Islam in Europe. One such topic concerns immigration and its implications for national identity. This isn’t a theoretical matter, not least because many Muslim migrants and some French-born Muslims have shown little interest in integration.

Reflecting on these matters, Rey doesn’t enter into policy-debates. Instead Rey underscores three principles as critical reference-points for discussion. One is that national governments have the primary responsibility for immigration policy (not, sotto voce, some imaginary world government). The second is that governments must make decisions about immigration with an eye to national well-being. This, he specifies, includes a nation’s cultural and religious heritage.

Rey’s third point is that we do have obligations in justice towards migrants, especially genuine refugees. Historically-speaking, Rey observes that there have been significant migrations into France at different points. Many Southern and Eastern Europeans migrated to France in the nineteenth century and successfully integrated. Muslims need to do the same. Granted, that’s easier said than done. Nonetheless, integration must occur. That, Rey reminds his readers, has been underscored many times by Pope Francis.

All this is a long way from the open borders, “Jesus-was-a-refugee” rhetoric articulated by various activists these days. It’s worth noting, however, that Rey’s principles are drawn directly from the Catechism of the Catholic Church and reflect the nuanced treatment of immigration found in Catholic social teaching. The bishop stands on firm ground.

Integration raise the issue of what European-born and migrant Muslims are expected to embrace. This is another way in which Islam’s presence in France is forcing everyone—Catholics, Jews, Protestants, non-believers—to ask themselves what it means to be French.

Rey doesn’t pretend that there aren’t a variety of traditions which have contributed to French identity. He does, however, underscore Catholicism’s unique place in the formation of France’s self-understanding. That’s simply a fact. To suppose otherwise is to be ahistorical. This fact, however, can lead Catholics in two different directions.

The first is to conflate religion with national identity. Throughout Europe, Rey observes, one sees politicians parading Catholic cultural symbols as rallying-points, despite their actual beliefs and lives often being seriously at odds with Catholic doctrine. This produces what Rey calls the instrumentalization of Catholicism.

The second path is to speak plainly and without arrogance about France’s Catholic deep roots and consider what these mean for France today. The objective isn’t to claim a type of preeminence for the Church in French life, let alone political-privileges. It’s simply to say that, without the indelible imprint made upon French culture by Catholics living their faith over the centuries in whatever sphere of life they found themselves, France would be a different place today. That will not only help Muslims understand the society into which they must integrate. It reminds believers and non-believers alike of Catholicism’s powerful contribution to what I think is accurately called France’s civilizational genius.

So does Rey see Islam as a menace or challenge? The answer is “it depends.”

Like most Frenchmen, Rey worries about radical jihadism’s spread among young Muslims in France. These expressions of Islam are what ultimately drive some Muslims to do terrible things, including to other Muslims. In the long term, they threaten the liberties that Westerners take for granted and which considerable numbers of Muslims want to enjoy.

At another level, Rey indicates that there are aspects of Islam about which rigorous and clear-eyed conversation is necessary, however awkward it may be. The affirmations of violence in key Islamic sources like the Koran should be discussed, he says. So too must Islam’s heavily juridical nature and its conception of God’s nature. A related issue, Rey says, is reason’s place in Islamic theology and understanding of the Deity. The questions asked by Benedict XVI in his 2006 Regensburg address aren’t going away. To imagine they can be sidelined is not only naïve but dangerous.

There are, Rey maintains, Muslims who want to have these discussions. But that requires rejecting the sentimentalist happy-talk that marks too many interfaith interactions. Assertions that Christianity and Islam are “essentially the same,” Rey comments, are nonsense, as any theologically-informed Muslim will affirm. Catholics and Muslims disagree about some rather fundamental issues and avoiding those topics is ultimately counterproductive. The best Muslim minds that he has encountered, Rey notes, understand this. Indeed, “many Muslims,” Rey says, “do not understand our reserve and think sometimes that Christians are not proud of their faith.”

That is why Rey ultimately sees Islam as a challenge: a challenge, that is, for Catholics in France and elsewhere to learn and love the Catholic faith so that they can tell Muslims what Catholics believe about, in Rey’s words, “God’s uniqueness, Creation, Jesus, Mary, the historicity of Revelation and Scripture, religious liberty, faith and reason,” etc. Pursuit of the truth, Rey states, is the essential raison d’être of dialogue. “There is no dialogue,” he writes, “without knowledge and love of the truth.” Canonizing religious relativism is in the interests of no-one who cares about truth. That is the lesson that Catholics can offer France and Europe in the face of Islam, if they choose to do so.

About Dr. Samuel Gregg 39 Articles
Samuel Gregg is Research Director at the Acton Institute. The author of many books—including the prize-winning The Commercial Society (Rowman & Littlefield), Wilhelm Röpke’s Political Economy (Edward Elgar), Becoming Europe (Encounter), the prize-winning Reason, Faith, and the Struggle for Western Civilization (Regnery), and over 400 articles and opinion-pieces—he writes regularly on political economy, finance, American conservatism, Western civilization, and natural law theory. He can be followed on Twitter @drsamuelgregg
Xing