One of the great Catholic publications of 2019 has been the translation by Kenneth Oakes and Francesca Aran Murphy of chunks of Olivier-Thomas Venard OP’s trilogy: Littérature et théologie, La langue de l’ineffable and Pagina sacra. The translations have been published by Bloomsbury in the Illuminating Modernity series, under the title A Poetic Christ: Thomist Reflections on Scripture, Language and Reality. 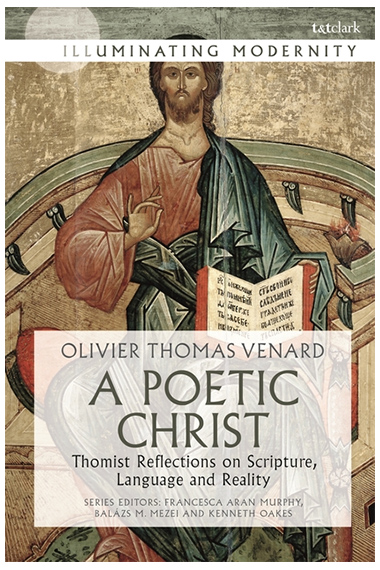 The work opens with a Foreword from the University of Notre Dame’s Cyril O’Regan. He explains that the objective is to explore the relationship between scripture, theology and literature from the perspective of each of these disciplines. Another objective, addressed in the first section of the book, is to defend a reading of the four Gospels as a harmonious quartet, rather than as four distinctively separate takes on the life of Christ.

Venard, who is a Professor of New Testament at the École Biblique in Jerusalem, is critical of the tendency to valorise what makes each Gospel distinctive. As he describes the problem: ‘the theological consequences of this practice are momentous, for it implicitly maintains that the different communities worshipped different Jesuses, with the range running from a prophetic figure who doled out predictions, to a kind of apocalyptic preacher, to a Galilean peasant, to a master of wisdom – parenetic or soteriological – and finally even to a kind of divine man (of ancient aretologies)’. Venard argues that the first Christian communities were not isolated groups completely ignoring each other but rather a network of communities in constant conversation.

Venard also suggests that it is possible to speak of a ‘vocal imprint’ of Jesus to be found in the many ternary or quaternary rhythms, alliterations, assonances and paronomasia to be found across the four Gospels. He rhetorically asks: ‘could it not be that the Gospel of John, his redactional forays notwithstanding, was a book of testimony formed by an experience of and reflection upon what Jesus said, while the Synoptics were linked, more or less skillfully by the talents of their narrators-redactors-writers, to what was said of Jesus in the early communities, with all the simplifications, attendant to oral, communal and popular transmission’? Not only does Venard answer Yes to this question but, moreover, he argues that the New Testament does give us access to divine language, not to mere human translations and interpretations relative to one cultural moment in Middle Eastern history.

Venard describes Christ as the cornerstone of all semiology. He suggests that St. Augustine was gesturing toward this conclusion when he compared Christ to light and intellect themselves.

The second part of the work offers five chapters on the relationship between theology and literature with an emphasis on the theme of the literary vocation. The final chapter in this section includes a reflection on Arthur Rimbaud’s A Season in Hell. Here Venard notes that Rimbaud sensed that trying to overcome Christianity with universalism, whether ‘humanist’ or ‘scientistic’, ‘means sawing off the branch on which one is sitting for only Christianity ensures the universality of language’.

The third section contains three chapters on the theme of language as a theological question. Although St. Thomas received many honourable mentions in the earlier chapters it is in this third section that Venard really becomes deeply Thomistic. He is especially interested in St. Thomas’s understanding of symbolism and allegory. Symbols, Venard explains, participate in the reality that they signify. They are an ‘aesthetic expression of ontological participation’. In contrast, allegory is about a relationship or correspondence between an obvious meaning and a hidden meaning. Venard quotes from a passage in Henri de Lubac’s work on medieval exegesis to the effect that for the medieval, the symbol, which is intuition in contrast to allegory which is discourse, form and meaning are not separable as they become in modern philosophy. Venard’s macro-level argument in this section is that speech is capable of truth because it participates in divine language.

The fourth section also contains three chapters. These address the language of the cross, including the theme of Eucharistic sacrifice, and here extensive reference is made to the commentaries of St. Thomas on scriptural passages. For example, St. Thomas spoke of Christ carrying his cross as a teacher his candelabrum, as a support for the light of his teaching. Venard writes: ‘the cross appears as the focal point of intelligibility, a centre of illumination, just as much as it is an object to comprehend, and so it illuminates the light of the human intellect. In this way, the act which is supposed to explain the crucifixion is actually generated by it: the writing on the cross is a development of the cross itself, one of the outgrowths of his virtus’ [power].

The final chapter in the fourth section is focused on St. Thomas’s Eucharistic poem Adoro te, best known in the Anglophone world as Godhead here in Hiding as translated by Gerard Manley Hopkins. Here Venard suggests that in carrying the power of language to its highest summit, the Eucharist also exhibits its weakness:

At the summit, in both the grandeur and humility of sacramentality which is centered on a word, the relationship of the Eucharist to the Body of Christ resembles the relationship of language to thought in a weak sense. Sacramentality ‘requires not separating the mystery of God from the symbolic mediation in which it gives itself, but also of not confusing them’, just as all thought is identified with a language but cannot be reduced to it. In this way, the Eucharistic words turn out to iconize dramatically the sublime yet modest, necessary yet secondary, condition of language in the weaker truths which we can transmit.

It is often said that a seminal academic work will ‘move the goalposts’ of a discipline or radically change some commonly accepted interpretation or perspective. In this massive 449 page translation Venard could be said to be moving goalposts about every twenty pages. Venard not only understands the biblical languages, but he is also completely at home in the fields of biblical exegesis, semiotics, hermeneutics and post-modern philosophy. He can use all the post-modern academic jargon and out-maneuver the most deconstructionist-oriented commentators.

The book is not an easy read because the author presupposes that the reader has something like his level of knowledge of the various disciplines upon which he draws. It is therefore the type of book that graduate students could discuss in reading groups. The breadth of scholarship upon which it draws is awesome.

Above all, it is consoling to discover a Professor of New Testament studies who clearly has heard all the deconstructionist takes on the scriptures but who can nonetheless intellectually defend the faith of Catholic centuries and its own hermeneutic. Oakes and Murphy have done the English speaking world a great service.

About Tracey Rowland 17 Articles
Tracey Rowland holds the St. John Paul II Chair of Theology at the University of Notre Dame (Australia) and is a past Member of the International Theological Commission. She earned her doctorate in philosophy from Cambridge University and her Licentiate in Sacred Theology from the Pontifical Lateran University in Rome. She is the author of several books, including Ratzinger’s Faith: The Theology of Pope Benedict XVI (2008), Benedict XVI: A Guide for the Perplexed (2010), Catholic Theology (2017), The Culture of the Incarnation: Essays in Catholic Theology (2017), Portraits of Spiritual Nobility (Angelico Press, 2019), and Beyond Kant and Nietzsche: The Munich Defence of Christian Humanism (T&T Clark, 2021).