Anyone who heard a talk or lecture over the years by Justice Antonin Scalia was aware of the treasure available to editors who would gather them together for publication. Following Scalia’s death in 2016, Christopher Scalia (the eighth of Scalia’s nine children) and Edward Whelan (a former law clerk) did just that with the engrossing collection published as Scalia Speaks: Reflections on Law, Faith, and Life Well Lived (2017).

All but one of the talks in this new book, titled On Faith: Lessons from an American Believer, appeared in Scalia Speaks, but in this small and elegant volume (also edited by Scalia and Whelan) they are introduced with a truly wonderful foreword by Justice Clarence Thomas and are interspersed with the personal essays of family 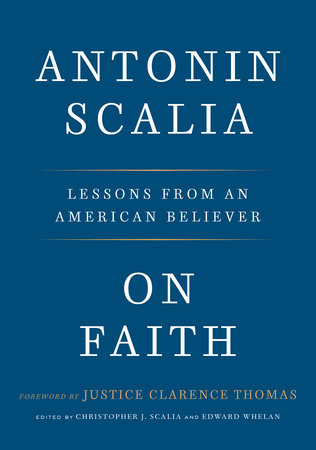 and friends. Also included are excerpts from significant cases on the Constitution’s religion clauses, Fr. Paul Scalia’s stirring funeral sermon, and Justice Scalia’s powerful letter to Dr. James C. Goodloe IV (the Presbyterian minister who delivered a sermon at Justice Lewis Powell’s funeral that emphasized Christ’s resurrection) that was discussed by Fr. Scalia at the funeral.

On Faith begins with two talks: “Not to the Wise – the Christian as Cretin” and “On Being Different – the Christian as Pilgrim.” Both take up the theme of Catholic “apartness” and emphasize that the Catholic thing is different, in big and small ways; our true home is, finally, not of this world. And that fact, Scalia understands, changes how one sees everything. The differences within the prevailing political, social, and moral order will inevitably result in tensions—some with lethal consequences—for the serious Catholic. In “Not to the Wise,” Scalia adduces the classic example of St. Thomas More in this connection, emphasizing that Catholics must discern this “apartness” and recognize the costs of confusion on this point. His conclusion speaks to all believers:

That possessing and expressing a worldview and a code of moral behavior that are comfortably in conformance with what prevails in the respectable secular circles in which we live and work is no assurance of goodness and virtue.

Scalia’s uncommon ability to speak plain truth in what have become almost hopelessly muddled areas is especially welcome on the subject of Catholic higher education. With both tuition costs and secularization exploding, the crisis is patent. In “Moral Formation – the Character of Catholic Higher Education,” Scalia unapologetically asserts what were once truisms at every Catholic university: “Part of a Catholic university, at least at the undergraduate level, must be precisely moral formation.” And slicing through the diversity-and-inclusion fog that inevitably enshrouds such discussions, Scalia says: “The only justification for a Catholic university, it seems to me, is that there is some distinctive approach to human knowledge that is peculiar to Catholic, or at least Christian, belief.” These insights are integral to any recovery of the Catholic character of putatively Catholic colleges and universities.

In Scalia’s 1996 speech on the false appeal of socialism, “Politics and the Public Good,” he cautions against investing too much theology in our economic arrangements (“To tell you the truth, I do not think Christ cares very much what sort of economic or political system we live under.”). He also provides a point of view on charity that has been annihilated by the welfare state. “The governmentalization of charity,” he cogently argues, “affects not just the donor but also the recipient. What was once asked as a favor is now demanded as an entitlement. . . . It is humbling to be an object of charity – which is why mendicant nuns and friars used to beg. The transformation of charity into legal entitlement has produced both donors without love and recipients without gratitude.” This sort of unfashionable clearsightedness and memorable eloquence recur throughout this book.

“The Authority of Government – Catholics and the Death Penalty” is a speech that became an influential article in First Things in 2002 (published under the title “God’s Justice and Ours”). It was and remains a careful and rigorous defense of the Catholic teaching in support of moral licitness of capital punishment. Notably, Scalia was writing as a central participant in the final review of the death penalty in specific cases and at the time of the prudential limitations placed on the death penalty by Pope John Paul II in the encyclical Evangelium Vitae (1995). (That tinkering has become a subversion of the teaching under Pope Francis.) He forthrightly addresses both issues. There is more theological discipline and good sense in this essay than in any official Church teaching issued in this area in many years.

Scalia of course contributed significantly to the Supreme Court’s jurisprudence on religion. He most famous—and controversial—opinion in the area of the First Amendment protection of religious free exercise (“Congress shall make no law . . . prohibiting the free exercise” of religion) is Employment Division v. Smith (1990). Here, Scalia wrote for the Court and held that neutral laws of general applicability that burden religious exercise are not a violation of the free-exercise clause. This opinion restored the Court’s analysis established in Reynolds v. United States in 1879, which upheld the ban on polygamy against a free-exercise challenge brought by Mormons. Scalia’s opinion left legal accommodations of minority religious practices where they belong in our constitutional order—with legislatures. In Locke v. Davey (2004), Scalia argued (in dissent) that a state scholarship program that discriminated against a student pursuing devotional theology degree was a free-exercise violation. The very good news is that this sound reasoning will find a majority on the current Court.

Scalia’s opinions on the establishment clause (“Congress shall make no law respecting an establishment of religion . . . “) featured here (dissents all) are masterly defenses of the thoroughly constitutional role of religion in public life as opposed to the anti-historical naked public square imposed by Court decisions. In McCreary County v. ACLU (2005), for example, the Court’s majority struck down the public display of the Ten Commandments. Scalia’s dissent ably invokes the record of American history to demolish what he calls the “false principle” that the Constitution somehow mandates neutrality between religion and non-religion in public life. In a similar way, Scalia uses longstanding historical practice to illuminate constitutional meaning in Lee v. Weisman (1992), a case in which the disastrous majority opinion by Justice Anthony Kennedy struck down an officially sanctioned prayer offered at a graduation ceremony at a public school. As Scalia’s dissent demonstrates in his inimitable way this opinion, even by the slipshod standards of living constitutionalism, pushed the limits of absurdity.

In his introduction to On Faith, Fr. Scalia says that “Catholicism requires the investment of the entire person. It engages not just the will and the passions, but also the intellect.” The essays and talks in this book all evince a brilliant Catholic mind at work assessing and criticizing and clarifying the defining issues of the day. What is also striking, though not surprising, is how often the personal reflections comment on how Scalia lived his faith daily. Justice Thomas, who worked daily with him for decades, writes: “Nino’s faith was robust, deeply personal, and central to his life – it guided him and gave structure to his life. It led him to love and care well for his family.” For Catholics, a higher compliment cannot be paid.

Catholics in American public life are, alas, too often models of pusillanimity. At any point where Church teaching clashes with current political orthodoxy, the latter wins in a rout. Invariably, the common good suffers. Moreover, faithful Catholic citizens are dismayed by this surrender. On Faith is exactly the book give to a good friend in this situation, a committed Catholic (or any Christian of good will) who labors under the vast cultural pressures to keep his faith very private and very quiet. The example that Scalia provides throughout On Faith about how to think with the Church and live the faith in all sorts of settings, both private and public, is heartening. This book preserves a rare and indispensable voice in American Catholicism.

(Editors’ note: This review was incorrectly posted originally as being written by Carl E. Olson. We apologize for the error.)

Did you find the Gorsuch hearings in the Senate Judiciary Committee a depressing exercise in political theater?  Are you tired of the members of the “world’s greatest deliberative body” playing “Gotcha!” games that would embarrass […]

The sheer ferocity of contemporary politics suggests that, for many people, it’s their real religion. […]