The Walk for Life West Coast 2019 (www.walkforlifewc.com), a peaceful protest of the U.S. Supreme Court’s 1973 Roe v. Wade decision striking down the nation’s anti-abortion laws, will be held this Saturday, January 26, beginning with a 12:30 p.m. rally followed by a walk through the streets of downtown San Francisco.  Tens of thousands are expected to participate, including seven bishops and numerous clergy and religious. There is no charge to participate, and it is open to all who wish to peacefully and lawfully show their support for life.

The Walk’s goals, states the Walk website, are to “be a vocal and visual message that people of the West Coast stand for life,” to “reach out to women harmed by abortion”, and to “inform society of the damage done to women by abortion.”

Eva Muntean, a co-founder of the Walk, noted how events on the other side of the country highlight the need for a public defense of life. “On January 22nd, the governor of New York, Andrew Cuomo, who identifies as Catholic,” she noted, in talking to CWR, “signed legislation that allows abortion up to the time of a child’s birth.  While we have made much progress changing minds and hearts on abortion in the 15 years we’ve held the Walk, this demonstrates that there is still much to do.”

Muntean added that the Walk was a West Coast alternative to the March for Life in Washington, D.C., which this year was held January 18.  Both are intended to roughly coincide with the January 22nd anniversary of the Roe decision.

Rally at the Civic Center Plaza

The 12:30 p.m. rally will be held at San Francisco’s Civic Center Plaza.  Featured speakers at the rally include Patricia Sandoval and Abby Johnson, two former Planned Parenthood employees who are now pro-life leaders.  Sandoval had three abortions herself and overcame a drug addiction; today, she is a pro-life and chastity speaker.  Johnson had two abortions, and today heads And Then There Were None (www.abortionworker.com), a ministry to help former abortion industry employees leave the industry.  She is the subject of a new film, Unplanned, which is based on her book of the same title and opens in theaters March 22.

Other speakers include Walter Hoye, a Baptist preacher who has focused on the devastation that abortion has had on black communities, and Fr. Shenan Boquet, president of Human Life International.  In 2009, Hoye was arrested and then jailed for 30 days for protesting outside an abortion clinic in Oakland; his conviction was later overturned by the Ninth Circuit Court. Fr. Boquet has traveled to more than 80 countries promoting the pro-life message, and frequently appears in the Catholic media.

The length of the walk is 1.8 miles.  At 1:30 p.m., walkers will leave the Civic Center Plaza to head down Market Street to the Justin Herman Plaza.  Organizers encourage participants not using public transportation to park by either plaza and use the shuttle buses or public transportation to return to their vehicles.  And, while there are sometimes protesters along the route, there has always been an ample police presence to secure everyone’s safety (see the Walk’s Code of Conduct for information on responding to protesters).

Muntean advises those who need a hotel room to look for alternatives just outside the City, as a large automobile manufacturers convention is being held in the City the weekend of the Walk and its participants will be taking up many of the available hotel rooms.

In addition to the rally and walk, there are many related activities, before and after, which participants are welcome to attend.  From 10:45 a.m. to 12:15 p.m., Georgette Forney and Fr. Frank Pavone of Priests for Life will lead a Silent No More Awareness Campaign, which features speakers who have been personally involved with abortion discussing its negative consequences in their lives.  There will also be an Info Faire from 11 a.m. to 12:30 p.m. at the Civic Center Plaza.

Other pre-event activities include a Walk for Life Prayer Vigil at St. Dominic’s Church, San Francisco, the Friday before the Walk from 6:30 – 7:30 p.m., and an All Night Eucharistic Adoration for Life at Ss. Peter and Paul Church, San Francisco, beginning at 8 p.m. Friday.  On the day of the Walk, at 9:30 a.m., San Francisco Archbishop Salvatore Cordileone will offer a special Mass for Walk participants at St. Mary’s Cathedral.

Following the Walk, at 5:15 p.m. Saturday, there will be an Extraordinary Form Mass at the National Shrine of St. Francis of Assisi.  Star of the Sea Parish will host a BBQ dinner after its 4:30 p.m. Vigil Mass; an all night Eucharistic Adoration will follow.  Check the Walk Schedule for additional details and other events.

While the Walk for Life West Coast is open to all, and organizers reach out to participants from many religious denominations, the event was founded by Catholics, and most of its walkers come from Catholic parishes and schools, with a significant number of Catholic clergy and religious participating.

San Francisco’s Star of the Sea Parish, for example, has 60 to 70 parishioners join in the Walk each year.  The parish was established in 1894, and is the closest in the City to the Golden Gate Bridge.

The parish hosts a few hundred high school and college students who cannot afford the high cost of a hotel room to sleep in the parish hall.  They’re provided with food, bathroom facilities and a comfortable floor on which to sleep; they’re also welcome to attend a parish BBQ (this year, noodles will be served and the event is called a “Wok for Life”) the evening of the Walk.  About 400 attend the BBQ, which includes testimonies and personal time with four Sisters of Life, whom the parish has flown out from New York with lodging provided by a convent nearby.

Martin Ford is a Star of the Sea parishioner who regularly participates in the Walk.  “It’s peaceful,” he observes. “It’s demographically mostly non-white.  Women are the main ones running the event.  There are lots of moms pushing baby strollers around.  The event, to me, shows that the pro-life movement wants to peacefully engage people of different views.”

He describes San Francisco as “a self-enclosed liberal bubble,” where residents may easily forget there are views that differ from their own.  The Walk, he continued, “presents the pro-life movement putting its best foot forward, [it is not] antagonistic nor forcefully political.”

Walkers come from both Catholic and secular schools.  Serra High School in San Mateo, for example, has sent as many as a hundred boys in past years.  Marin Catholic High School in Greenbrae also has a strong turnout; Walk organizer Kathleen Bruno remarked, “The DNA of their school is so pro-life.”

New school participants this year include the Dominican ICA Cristo Rey Academy, an independent Catholic high school in San Francisco.  The new head of campus ministry, Thea Fiatarone, has attended the Walk before, but this year will lead a group of students.  She noted that she prays regularly in front of abortion clinics, and that the issue was important to both her and her husband.  She said, “Everyone deserves a right to life.  Our job is to educate young women so they make that choice for life.”

In previous walks, she observed “a combination of love and overwhelming joy on the part of people who want to show the world they care.”

Like Ford, she noted that her pro-life viewpoint was a minority position in the City, but believes the Walk has made a positive impact.  She said, “I always enjoy seeing the faces of people who come into the City for the day to shop and walk around by coincidence on the day of the Walk, and we see their shocked faces as we pass by.  But it is good that we in the pro-life community who seem so hidden in the City come out and make ourselves visible.” 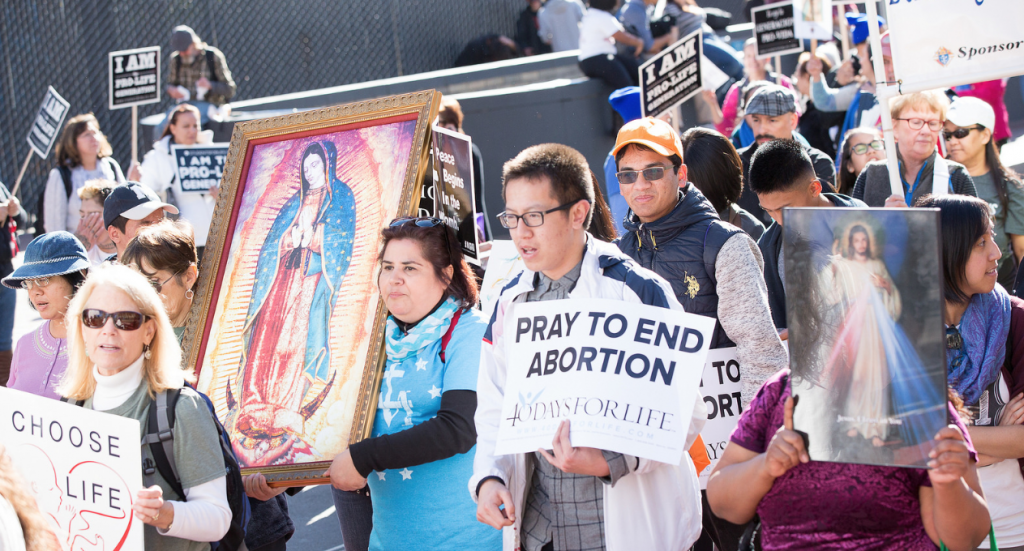