“Through some fissure the smoke of Satan has entered the temple of God.” — Pope St. Paul VI in 1972 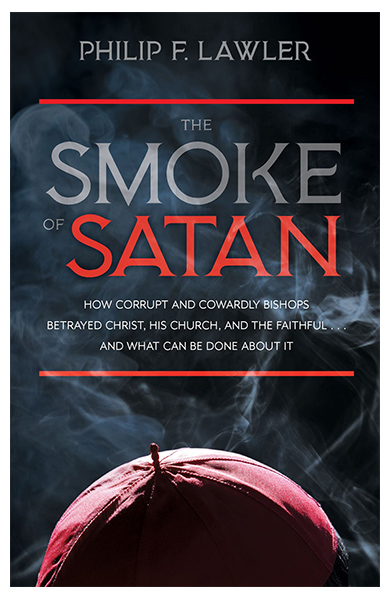 Watching bishops in this country attempt to work through the extraordinary mess created by the revelation of the moral squalor that failed to impede Archbishop McCarrick’s rise to the very top of the American hierarchy is as discouraging a spectacle as most Catholics alive today have witnessed regarding episcopal leadership. (The picture of a lecherous, beaming McCarrick in a bathing suit with his arm draped around the waist of his teenage victim is fixed in the mind as the perfect image of the rot.) As Philip Lawler observes in his aptly titled The Smoke of Satan, Catholics in America have no confidence in the bishops – and with very good reason: “The bishops lost our confidence because, as a group, they were – and were shown to be – dishonest.”

A veteran and well-respected journalist, Lawler has for years provided valuable commentary on Catholic matters. He is, moreover, the author of the excellent study The Faithful Departed: The Collapse of Boston’s Catholic Culture (2008), a recent critique of Pope Francis’ papacy in Lost Shepherd, and reliable coverage of the current troubles. In this new book, which is designed to address the current moment, Lawler advances, on the one hand, a penetrating critique and, on the other, a hopeful exhortation. The two sides are summarized at the outset of the book:

To advance through the ranks of the hierarchy in the late twentieth century, clerics were expected to suppress problems rather than confront them, to soothe the faithful rather than rouse them, to conceal problems rather than admit them. In that atmosphere, when bishops learned that priests molested young men, they did their best to “manage” the issue, to keep things running smoothly, above all to avoid calling public attention to the problem. So the abuse continued – just as the theological dissent and the liturgical abuse continued. But finally, as almost always happens, the cover-up failed; the truth of the abuse scandal emerged. Now that the evidence that was suppressed for decades has exploded into public view, the bishops’ neglect – likely too benign a word – is unmistakable.

If the fundamental problem facing the Church is dishonesty – a habit of deliberate ambiguity, a failure to grapple with hard truths – then the solution must be a candid, unapologetic return to the truth: not only in addressing and dealing with the shocking details of clerical abuse, but also in the proclamation of the truths of the Catholic faith. And if the bishops have lost their instinct for that forthright evangelical approach, then it falls upon lay Catholics – in this era, proclaimed by Vatican II as “the age of the laity” – to demand the truth and reclaim the Catholic tradition.

The gross malpractice of the American episcopate identified by Lawler, coupled now with aggressive — and incomprehensible — stonewalling by Pope Francis, means that the current crisis will most likely end in disaster for the hierarchy. As things stand right now, it is hard to see any real reform coming. While Rome takes it nice and easy, however, American prosecutors march ahead. The U.S. Justice Department has commenced a RICO investigation of the Church and a host of state investigations have opened as well. These developments will not go away; in fact, we can expect a steady flow of Pennsylvania-like grand-jury reports detailing clerical corruption in revolting detail and criminal indictments, all of which will continue the destruction of what little remains of the moral authority of the bishops in this country.

Lawler ably depicts the tumult that has brought us to this point. His book provides a larger context for the collapse of episcopal authority. Lawler adverts to the breakdown in sexual morality, in liturgical discipline, and in theological orthodoxy since the Second Vatican Council, all without serious, effective opposition from the hierarchy. (His chapter “A Patrimony Squandered” is a striking overview of this process.) The chaos is all around us, and this unraveling of authority involves more than the failure to confront the clerical penchant for buggery.

And yet for the laity the evangelical mission arising out of the Great Commission continues. This point goes to the second part of Lawler’s book, where he provides a truly indispensable insight:

In more than thirty years as a journalist covering Catholicism, I have found that the most exciting signs of vigorous life in the Church often (I am tempted to say always) come from unexpected directions. Official renewal programs, launched by diocesan committees under the guidance of expensive consultants, begin with great fanfare but end with meager results. Meanwhile, far from the limelight, prayerful Catholic individuals, without formal credentials and without financial support, working alone or in small groups, quietly work wonders.

Lawler’s emphasis on Catholicism’s little platoons of (primarily) laity, is indeed the way forward. The work of restoration on the ground, especially in parishes, is in the hands of committed lay Catholics. Tired of heterodox pabulum being offered in the parish RCIA program? Volunteer to take the program over and teach those eager to enter the Church the fullness of the faith. Complaining about what Bishop Robert Barron calls the “banners and balloons” Catholicism that dominates the parish CCD program? Volunteer to teach in the program and make your teaching Christo-centric. Concerned that the parish marriage preparation program is little more than a secular lifestyle seminar? Volunteer to teach couples seeking to be married in the Church the truth about marriage as the Church teaches. Disheartened by the ignorance of the faith demonstrated by fellow Catholics? Volunteer to start a reading group and read through the Catechism of the Catholic Church. These are concrete means to reach people directly, face to face, about establishing friendship with Christ. This is the “vigorous life” that Lawler has observed with such hope over recent decades.

Lawler concludes his briskly paced and concise book with specific pieces of advice that he directs to lay Catholics. He advises, in list form, of what to do (e.g., “Pray for Catholics who are no longer practicing their faith, for the disaffected, the alienated, the dissidents. Pray for their return.”) and not do (e.g., “Give priests (or anyone else) new tasks without offering to help. Good priests are already busy; lazy priests are . . . well, lazy. Make it easy for the priest to say yes.”). This is prudent advice at any time but especially our time, when wave after wave of scandal threatens to keep us from our mission of sanctification and evangelization. As Lawler enjoins the laity: Demand the truth and reclaim the Catholic tradition.

The Smoke of Satan: How Corrupt and Cowardly Bishops Betrayed Christ, His Church, and the Faithful . . . and What Can Be Done About It
by Philip F. Lawler
Tan Books, 2018
Paperback, 202 pages

Pope Francis: Jesus entrusted Mary to us as a Mother, ‘not as co-redeemer’

Vatican City, Mar 24, 2021 / 05:00 am (CNA).- Pope Francis on Wednesday said that Jesus entrusted the Virgin Mary to us as a Mother, “not as co-redeemer.”Speaking at his general audience on March 24, the pope said that while Christians had always given… […]