When Bram Stoker published Dracula in 1897, he gave us a genre that—quite rightly—refuses to die.

While earlier writers had dabbled in the vampire theme, Stoker’s novel codified it, and the bloodsucking Count Dracula has attained a permanent afterlife on the page and screen. In recent decades, though, our attitude toward vampires has become a bit muddled: we’re starting to depict them as merely misunderstood, as flawed or tragic, or even as romantic heroes. Thankfully, Eleanor Bourg Nicholson goes for the jugular of this bad idea, and her Catholic vampire novel A Bloody Habit makes a refreshing return to Stoker’s original dark picture of vampirism. With brisk prose, bone-dry humor, and a profound theological vision, Nicholson explores the demonic nature of evil, and reminds us of the power of Jesus of Nazareth to defeat it. 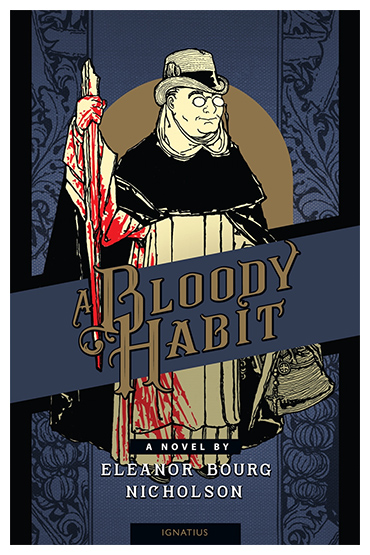 The year is 1900. John Kemp, a cranky, stolid London lawyer, has no imagination and no interest in supernatural nonsense. His dull life has no excitement beyond the titillating divorce case of one of his legal clients. But when John Kemp meets a bespectacled Dominican priest whose business card reads “Vampire Slayer,” our protagonist finds that his tidy little modern world has been invaded by heaven and hell.

A skeptic, and a sensible man, Kemp must now reckon with a series of gory murders, a sinister Romanian count, decadent English diabolists, and an inexplicable band of jovial, white-robed men who do cheerful battle with some unknown enemy. The novel is framed as Kemp’s memoir of this journey, but his real name and identity remain a secret. In Nicholson’s fictional world, the Dominican order has been tasked with combatting the vampire problem (werewolves are fittingly left to the Order of Friars Minor). It’s a delightful, scary, unputdownable novel. I laughed out loud; I felt afraid; somehow I accidentally cut my finger and bled real blood onto page 166. I am not making that up.

But occupational safety hazards aside, Nicholson has also perceived something quite profound about the vampire myth: vampirism is the demonic parody of the Catholic doctrine of the Eucharist. As writers like Nathaniel Hawthorne and Flannery O’Connor have dramatized, deep wickedness often manifests itself as a perverted image of the things of God. As Tolkien’s Frodo Baggins tells Sam in The Lord of the Rings, evil “can only mock, it cannot make.”

The contrast between the Eucharist and vampirism becomes central to the novel. For Catholics, the Eucharist saves us from sin. It gives life to our spirit. It grows our capacity for love. Perversely, vampirism comes from sin and leads to sin. It makes for a kind of living death. It manifests itself in lust, violence, and hate. The Eucharist gives Christians unity; vampirism turns all other men into potential prey.

It is this central Christian sacrament that the vampire imitates, eating the flesh and drinking the blood of his victims, driven by a desire for pleasure and power—and gaining an unnaturally long life. Here, this demonic perversion of Communion imbues the human being not with humility but with destructive power. The Christian Eucharist makes us freer to love; but conversely, even those who willingly become vampires find only a slavery to the bidding of their dark master.

Nicholson knows how to write horror, and her book has some grisly murder scenes too disturbing for younger readers. But, as a good artist, she depicts evil as it truly is. For unless we know the problem—unless we truly and frankly confront what darkness looks like—we cannot fully appreciate the Light of Christ.

Indeed, Nicholson’s novel is shot through with the understated power of goodness. At the head of the army of God stands a little Dominican priest, Father Thomas Edmund Gilroy. Friendly, humble, and learned—a sort of Dominican version of Chesterton’s Father Brown—Father Gilroy meets none of the expectations we have for a slayer of ghouls. As the novel approaches its terrifying climax, Father Gilroy and his chosen band of friars team up with John Kemp and the English law enforcement to form a twelve-man team. We should be thinking of the twelve Apostles, especially when one of them goes armed with a fisherman’s net. Ultimately it is God’s power, exercised in His church, that defeats the vampire: the Dominican brothers wield the powerful Name of Jesus, the rites of exorcism, and—occasionally—a crossbow.

Along the way, Nicholson delivers a harrowing journey of faith for John Kemp, who must wrestle with realities that transcend his comfortable materialist worldview. And the author does this, always, with a smile. The book has some unutterably funny parts. A brilliant old Dominican who has gone slightly dotty. A blossoming romance between the domestic staff. And always the spot-on, sarcastic commentary of John Kemp, delivered by Nicholson with undead-pan humor. It’s a novel you’ll give up sleep to read, and it’s well worth sinking your teeth into.