Father Gabriel is back for another mystery: The Vanishing Woman.

In her first book of the Father Gabriel series, The Sleeping Witness, novelist Fiorella De Maria gave readers a chilling insight into man’s capacity for evil. In her new mystery, The Vanishing Woman, she delivers a detective story that reaffirms the value of even a single human life; and along the way, she gives us an insightful meditation on the long-term costs of war. 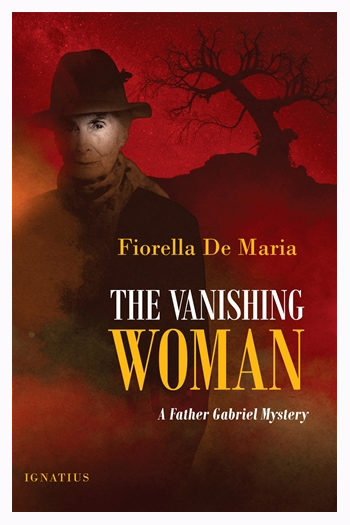 The Vanishing Woman takes place during a period of “make do and mend,” as England picks up the pieces after the Second World War. Times are still hard: deep wounds and even deeper secrets lie in the hearts of men and in the very landscape of war-torn England. Our priestly sleuth Father Gabriel still pines for his beloved abbey and for the monastic life, yet he serves faithfully in his assignment at the parish of St. Patrick. But when a woman seemingly disappears from plain sight, and her dead body turns up miles away in a river, Father Gabriel finds himself facing a mystery to solve. With his characteristic stubbornness, he works to uncover the truth—a truth that more than one person in town would like to bury forever.

De Maria strikes a delicate balance in her crime fiction. She is mindful that on the one hand, we read these stories for the pleasure of the suspense, and for the satisfaction of solving the puzzle; on the other hand, the author’s Catholic anthropology keeps us well aware of the horror of the sin Shakespeare once called “Murder most foul.”

Like so many of the best murder mysteries, The Vanishing Woman gives us a dead victim that everyone had motive to hate: Enid Jennings, the bitter, anti-Semitic, and abusive old woman who spreads discord wherever she goes. Plenty of townspeople are glad she’s gone, but for Father Gabriel, the Fifth Commandment doesn’t make exceptions for offing unpleasant people. In a very British moment of understatement, he tells one woman, “Much has changed in the world, but fortunately murder is still universally frowned upon.”

It is the Church’s teaching on the value of human life that makes Father Gabriel seek justice for Enid Jennings, even with all the victim’s ugliness and anger. Alluding to John Donne’s magnificent “Meditation 17,” Father Gabriel insists, “Each man’s death diminishes me.” In the Body of Christ, and indeed in the family of the human race, a sin wounds all the members. This conviction drives our priestly hero to hunt down the truth until justice and right can be restored.

While he does this, Father Gabriel charmingly struggles to balance his pastoral responsibilities with his need (and perhaps his calling) to solve crimes. He wonders about one of his famous predecessors in the priestly-detective line:

how on earth had Father Brown managed it? A fine detective he certainly was, but what sort of a shirker of a priest must he have been? When had he ever had to bother himself with the minutiae of parish life, with the souls of tiresome, whingeing old ladies and fatherless children, and reforming gamblers and wife beaters?

It’s a good question: certainly most of the priests we know would have little time for crime-solving. But God works through the desires of our hearts, and Fr. Gabriel most certainly has a love—and a knack—for detective work. We might wish the author had given us a little more development of this humble and likable character; but then again most of the fun in mystery novels comes from the complicated twists and turns of the plot. De Maria writes well and delivers a good story; at times her prose simply delights, as when she describes one young man as having “the face of a medieval hangman.” It’s a line Flannery O’Connor would envy.

But De Maria also goes beyond the simplicity of much crime-fiction to offer a portrait of the long-term costs of war: anger, violence, trauma, and loss inform this well-researched period piece set in the postwar era. The author knows English military history: part of her plot centers on the secret army the English had assembled to resist the seemingly-inevitable German land invasion during World War II. In hundreds of camouflaged subterranean metal bunkers, small units of elite guerrilla soldiers lay ready to sabotage and undermine an invading army. But in De Maria’s novel, these buried bunkers, slowly rusting under the English turf, become a powerful metaphor for the wounds still rankling beneath the surface of peace.

The war has taken a grave toll. Several of the characters have experienced trauma from which they have not healed. The temptation is always to repress, to conceal, and to keep secrets; what Father Gabriel’s England needs, and indeed what the hearts of all human beings need, is to remember, to speak the truth, and to forgive. Otherwise the anger and fear will continue to wound the next generation and the next.

In a way, this captures the project of some of De Maria’s writing. In her fiction she seeks to remember and articulate the pain and complexity of the past, so that it can be understood. Then hopefully, human beings, nations, and cultures can be renewed after trauma. But the work of remembering and starting again is difficult: as Father Gabriel puts it, “no new beginning was easy, wherever it occurred.”

The spiritual witness of Flannery O’Connor

The question sometimes comes up: “Where should I start with Flannery O’Connor?” Perhaps the person posing the question has never read O’Connor at all. Or he might have encountered one of her widely anthologized stories […]

From the pontificate of Gregory XVI down to the present day, there has been an ongoing crisis precipitated by the advent of the “New Things” (rerum novarum) of socialism and modernism. Since 1832 and the […]

Meriol Trevor (1919-2000), who was an Oxford-educated Catholic convert, wrote numerous books for children and adults, and Lights in a Dark Town: A Story About […]