If you wanted to find another period when papal powers and personalities were as controverted as they are today under Pope Francis, you’d have to go back to the 1860s, a decade that culminated in the First Vatican Council. That council is treated in a welcome new book titled Revered and Reviled: A Re-Examination of Vatican Council I and written by John R. Quinn, the retired Archbishop of San Francisco. 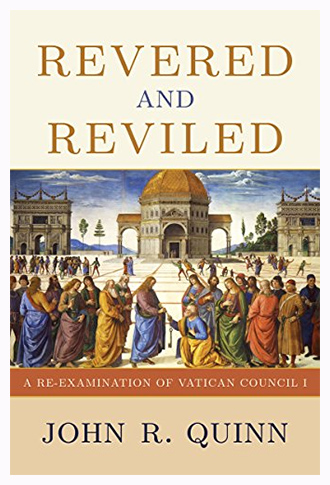 When I was finishing writing Orthodoxy and the Roman Papacy ten years ago now, I was somewhat amazed at the relative neglect of the First Vatican Council by modern anglophone scholars, all of us writing in the overlarge shadow of Vatican II, a council that has engendered a massive body of literature. But Vatican II (and indeed the entire modern papacy) make no sense without carefully attending to Vatican I, which, apart from Margaret O’Gara’s Triumph in Defeat (1988) and Richard Costigan’s The Consensus of the Church and Papal Infallibility, (2005) has garnered scant attention—until now.

John R. Quinn aims, as with his earlier works, to make specialized writings in ecclesiology and history more accessible for the general reader. Revered and Reviled succeeds admirably in this goal. Though there are some areas (noted below) where I think Quinn skimped on important details, this book is a short but useful introductory text to complicated questions. (For those wanting a longer and more detailed treatment, Harvard University Press has just published Vatican I: The Council and the Making of the Ultramontane Church by John O’Malley, S.J.)

Tracing out what Vatican I said requires, as Quinn’s introduction notes, that one wade through oceans of misconceptions. But to what end? Quinn is forthright in saying that “my objective is to uncover the authentic doctrine on these issues as it was proclaimed by Vatican I and thereby to establish that the Council is not an obstacle to a more collegial exercise of the primacy or an obstacle to the stated intention of Pope Francis for synodality” (vii).

In saying this, he has squarely faced the problem that Vatican I presents, and has always presented: does papal primacy as the council defined it render otiose any other exercises of patriarchal, synodal, or episcopal authority? De iure the answer is no. But de facto? Here matters are a good deal more complicated and problematic. Much as the fabled “spirit of Vatican II” was invoked to justify a lot of rubbish inflicted on the Church since 1965, so the spirit of Vatican I has haunted, and often inhibited, every exercise of episcopal, patriarchal, and synodal power for more than a century—as we Eastern Catholics are only too aware.

But Vatican I is itself haunted—by the French Revolution. The strongest part of Quinn’s book is his insistence on understanding Vatican I in what French historiography often calls the longue durée of the nineteenth century, which really began in 1789 with the French Revolution. In looking at Vatican I in the aftermath of the revolution, Quinn illustrates what I have often called the Law of Unintended Consequences of Papal Growth: popes acquire certain powers almost always in emergency situations, when no other pastoral tools are at hand to face the danger. But given the institutional conservatism of the papacy, it rarely gives up those powers once the danger has passed, thereby creating serious but unintended problems in different contexts.

Thus, Quinn notes that in trying to come to terms with Napoleon after the Revolution—which drenched the Church in blood—Pope Pius VII, in a sauve qui peut situation, gave in to Napoleon’s demand that the entire French episcopate be sacked as the price of being able to salvage just about anything in French Catholicism. It was, and remains until the recent developments in Chile (about which I wrote here), a staggering and unprecedented attempt at removing an entire national episcopate. Previously no pope would have dreamed that he had such primatial powers. In forcing the pope so to act, Napoleon, in one of history’s huge ironies, thought he was weakening Pius and his office, but in fact this served massively to strengthen its powers of centralization across the entire Church, putting ideas of new papal powers into the heads of the council fathers of 1869-70 long after Napoleon’s death in 1821.

The subsequent and more widespread revolutions of 1848, together with the loss of the Papal States and the unification of Italy into the modern nation-state we know today (three factors Quinn does not deal with sufficiently in my view), all further haunted the council. When the bishops gathered, Quinn says that many of them imagined the Church was living through an “apocalyptic” situation calling for the most “extreme and exceptional” response (51; cf. 111). Defining the pope as having universal jurisdiction and infallible teaching authority was just such an exceptional response.

It was a response prepared decades earlier, Quinn notes, by such figures as Joseph de Maistre (some of whose ideas I discussed here). Maistre’s extreme ideas were part of the ultramontane movement which was countered by none other than John Henry Cardinal Newman, to whose thought Quinn pays considerable and welcome attention in this book. Newman had a far better sense of the history of the Church than Maistre did, and a first-class theological mind, which the overly excitable Maistre did not. It was Newman who could see—with a serenity that escaped most others, including the fathers of Vatican I—that the crisis years of the nineteenth century would pass. He thought convening a council in such a time was unwise because the participants would likely react in a panicky manner.

The fathers of Vatican I did not give in to total panic, but they came close. Their legacy to us is a papacy braced always to assume the worst sorts of machinations from hostile tyrants and states against whom papal jurisdiction must ever be defended. The problem with this perpetual defensive crouch is that it distorts a healthy ecclesiology, leading to the distended centralization and papal cult of personality many of us have lamented never so much as under Francis.

If the traumatic context of the post-revolutionary period is gone, should Vatican I follow? If the centralization and personality cult are problems, should we scrap Vatican I to get rid of them? However tempting it may be for some to answer in the affirmative since 2013, it is a temptation devoutly to be resisted for, as Quinn knows, and as any orthodox Catholic must, Vatican I has been dogmatized as an authoritative council by and for the Catholic Church, with the result that it must be accepted de fide. But acceptance of the decrees does not mean acceptance of everything that purports to follow from them—as I tried to suggest in this 2016 CWR essay.

In this light, Quinn strikes the right balance, noting that it was “the intention of the Council to ascribe to the Pope the power of authoritative interpretation when the needs of the Church required it” but this same council did not “teach that primacy of jurisdiction means that the only mode of papal primacy is the current structure of highly centralized government which did not exist in the first millennium” (54).

Such highly centralized models are the far greater consequence of Vatican I than its teaching on infallibility, which, as Quinn repeatedly notes, is much more misunderstood and much less of a concern, not least because it is so rarely invoked. But in both cases, properly understood, they are gifts to the Church “limited…and surrounded by conditions” but providing “a necessary and important anchor, particularly in confused and troubled moments” to preserve “the Church in unity of faith and communion when circumstances warrant it” (115).

Those circumstances, Quinn says in his concluding lines, are “crisis situations.” He says nothing—because the council said nothing—about crisis situations where the papacy itself may be the cause of “confused and troubled moments.” But if there is one lesson from Vatican I more relevant today than ever before it is that these crisis moments will pass. After fearing the worst, Newman saw that Vatican I was much more modest than the ultramontane party wanted, and that its apocalyptic paranoia was wildly overblown, allowing him to offer this serene counsel about history:

Christianity has been too often in what seemed deadly peril, that we should fear for it any new trial now. … Commonly the Church has nothing more to do than to go on in her own proper duties, in confidence and peace; to stand still and to see the salvation of God.

Three or four times each month, Father X (as I’ll call him here) celebrates the noontime daily Mass I regularly attend. I’m grateful for his homilies, which are almost always thoughtful. Thus in a recent […]

Bishops might consider making these six affirmations about Blessed Paul VI’s encyclical, in one form or another. […]

On St. John Lateran, the cathedral church of Rome

Editor’s note: The following homily given on the feast of the Dedication of the Basilica of St. John Lateran at the Church of the Holy Innocents, New York City. The Church celebrates liturgical commemorations of […]