It is a mark of our hyper-political and hypocritical age that those who are most ignorant of the crusades should condemn the perceived ignorance of medieval crusaders. Sprinkle in accusations of greed, thuggery, and a moral equivalence with ISIS (see former President Obama’s speech at the National Prayer Breakfast on February 5, 2015) and it pretty much sums up what many people think they know about the crusades. But popular understanding of the crusades lags decades behind scholars. It is as if a generation of people read Steven Runciman’s three-volume A History of  the Crusades (1951-53) a half-century ago and then, along with their progeny, closed their eyes to everything published after. 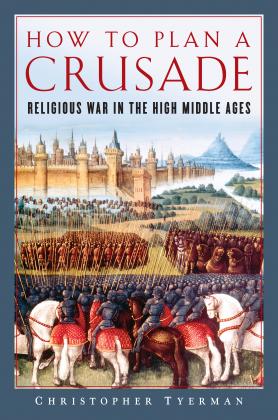 In How to Plan a Crusade: Religious War in the High Middle Ages, Christopher Tyerman, Professor of the History of the Crusades at the University of Oxford, demolishes the legend that Western crusaders were mere irrational rabble from Dark Age rubble. Tyerman painstakingly documents the gargantuan efforts involved in crusade organization, recruitment, financing and logistics. He makes the irrefutable case that the crusades were based on faith and reason. He comes out swinging in the book’s Introduction saying,

The crusades have frequently been portrayed as ultimate symbols of of the power of credulity…the blind leading the deluded. What follows argues that in almost all respects this image is false.

Discussion of the crusades is also very often intertwined with skewed perceptions of the broader medieval age. This no doubt leads to consternation for Tyerman and his fellow medieval scholars. Early on he lays the foundation for the existence of medieval rationality and, by extension, the rationality of the crusades:

Few periods of the past have suffered more from modern condescension than the rather patronizingly described Middle Ages, an imagined limbo of coarseness between the civilized worlds of classical antiquity and the Renaissance, a model carefully constructed by fifteenth-century humanists and lovingly polished ever since.

The assumption that faith or belief is antithetical to reason and vice versa is a canard given wings during the Enlightenment and the demolition of medieval (and, it might be remembered, classical) science.

Tyerman’s book is preceded by James M. Powell’s Anatomy of a Crusade, 1213-1221 (1986), published more than three decades ago. But where Powell focused solely on the Fifth Crusade’s organization and leadership, Tyerman covers the entire crusading period, roughly from the eleventh to the fourteenth centuries. He is also geographically inclusive, examining crusades in the Baltic region, as well as medieval Iberia (modern day Spain and Portugal). He offers scope and depth in a very readable narrative. And while more has been written on crusade planning in recent years it largely languishes in inaccessible academic journals and essay collections. Tyerman’s book is therefore original and will be the standard for decades to come.

How to Plan a Crusade’s structure consists in five parts: Justification, Propaganda, Recruitment, Finance, and Logistics. Each part is divided into chapters covering specific aspects of the larger whole. For example, Logistics includes chapters on coordination, health and safety, supplies, and strategy. If your eyes glaze over with the possibility of reading nearly three hundred pages of this sort of thing don’t despair. Parts of the book are admittedly a slog, reading rather like a medieval mail order catalog of crusading necessities. There is simply too much source material to be combed, collected, and considered. Tyerman also jumps around between countries and centuries, often in the same paragraph—an additional challenge for the reader. But despite these minor drawbacks, Tyerman tells a compelling tale with clarity and concision.

Justification for the crusades was the province of the Church. The writing and teaching of Bernard of Clairvaux, and papal bulls such as Quantum praedecessores, Audita tremendi, and Quia Maior, made the case for military action. Tyerman is exceptional in explaining the distinctions between Urban II’s praelia sancta—a holy war that opened the spiritual treasury of the Church for all participants—and the legitime bella, or just war. This illuminates what participants understood about their undertaking and how contemporary sources could write of crusading as an act of love (a theme explored in greater depth by historian Jonathon Riley-Smith). But getting knights and squires to leave their wives—spousal consent was required for much of the crusading period—and travel halfway across the world, risking death and disease and nearly bankrupting themselves in the process, took some persuasion.

The crusades were preached across Europe. From Pope Urban II’s first call at Clermont in 1095 to the fourteenth century (even after the fall of Acre in 1291), canons and cardinals and monks fanned out to preach the taking of the cross. And while propaganda—as a modern descriptor—is not how medieval audiences understood the preaching of the crusades, it is an apt word for readers to understand this flurry of activity. Though there were other forms of publicity for the crusades, preaching was perhaps the most fitting means of persuasion. As Tyerman observes, “crusade preaching was distinctive.” So much so that by the thirteenth century, lesser known preachers relied on sermon collections of the “stars of the genre.”

Princes and paupers heard the call, understood it, and took the cross in great numbers. Recruiting “relied on organization, not emotion.” Ultimately the business of travel to, and fighting in, the Holy Land fell to the wealthy and knightly classes. Nevertheless, the Church opened her spiritual treasury to all. One did not need to wield the sword to obtain the grace. Crusader armies traveled with craftsmen, servants, and cooks. Recruitment often involved public displays and mass audiences and was regularly robed in liturgical ritual.

For all their spiritual and theological foundation, the crusades were still wars of re-conquest (as was the case in Muslim Iberia). Christianity permeated the Middle East for centuries before the arrival of Islam, and the object of crusading was always to return the region—especially Jerusalem—to Christianity. This does not mean crusaders lacked worldly incentives. The “crusade mentality,” Tyerman says, “never excluded profit.” Nor did the existence of other motives negate religious conviction.

That the crusades were first and foremost religious endeavors did not diminish the necessity of practical planning. Practical considerations of cost—as well as any gain—were as integral to medieval war fighting as they are now. Tyerman is superb in detailing all the ways in which the crusades were funded. A complex network of international finance emerges, one in which our modern financial system has roots. “Crusade finance,” Tyerman argues, “contributed to the freeing of the land market, the opening of international credit markets and the creation of novel fiscal techniques.” He also points to surplus moveable wealth as basis of taxation, another means of funding the crusades. He makes the rather depressing case that such assessments constituted the first income taxes.

It is no surprise that formal, institutionalized tax structures were created to pay for thousands of men, horses, and their supplies to journey to the Middle East. It shocks nonetheless to read the section on logistics. Each crusade was a massive undertaking. Tyerman—at risk of crushing the reader under the weight of shipping contracts and charters, purchase agreements, and the like—excels at explaining the intricacies of moving men and materiel across an ocean or continent. Even more interesting is Tyerman’s explanation of the adaptability of crusader armies. Beset by disease, shipwreck, starvation, and recurring attacks of Turkic and Bedouin raiders, crusaders successfully journeyed beyond the sea and for nearly two centuries maintained a presence in the Holy Land. This could not have been done without disciplined planning and organization.

How to Plan a Crusade is meant for the general reader. But it assumes a basic working knowledge of the crusades. Anyone who has read Tyerman’s well known God’s War: A New History of the Crusades (2008), or any other survey is ready for this book. It is a unique achievement, and one that forcefully corrects the astigmatic perception that the crusades were irrational, reactionary, and born of ignorant fanaticism. “Reason,” he says, “made religious war possible, a conclusion that might give anyone pause in the twenty-first century.” Tyerman returns reason to its rightful place alongside faith in the phenomena that were the crusades.

How to Plan a Crusade: Religious War in the High Middle Ages
By Christopher Tyerman
Pegasus Books, 2017
Hardcover, 432 pages

The Darkness Gathers: Why public discussion has become increasingly irrational

A regime of pyramiding illusions that substitutes abuse for argument can’t last forever, and many wonder what will end it. […]

The Multicultural Myth, Anti-Semitism, and Misogyny

The unanswered question about the controversy over Representative Ilhan Omar’s anti-Semitic statements is why anyone was surprised by them. Judging by the heavy duty hijabs she wears, Omar is a religious Muslim. And the Koran, […]