Take in something lasting and satisfying this summer. Take a look at Mark Levin’s new book, Rediscovering Americanism and the Tyranny of Progressivism.

The latter half of the title will draw eyes right away. Glancing the table of contents, I almost jumped straight ahead to the chapters on the “Progressive Masterminds” and the “Philosopher-Kings,” where you’ll find the dismal likes of Herbert Croly, Teddy Roosevelt, Woodrow Wilson, the awful John Dewey, Walter Weyl (the “Progressive Masterminds”), followed by Jean-Jacques Rousseau, Georg Wilhelm Friedrich Hegel, and the colossally destructive Karl Marx (“Philosopher-Kings”). 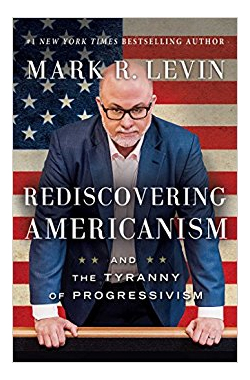 All of that is obviously intriguing, as are the chapters that follow on the tyranny of the administrative state vs. the blessings of liberty, property, and republicanism. But it’s actually the opening of the book—the very first chapter—that is indispensable and what I’d like to highlight here. It’s worth reading this summer and, in fact, any and every day of the year. Read it yourself and share it with others.

And what is natural law? I’ll quote Levin first and then highlight just a portion of what he cites from others.

Natural law is right law. And unfortunately, as Levin notes, “that which is naturally just may not be legally just.” Indeed, to the contrary, all sorts of governments make laws that are unjust, especially laws that ignore or violate the natural law, from the legal right to own a slave to the legal right to kill unborn children, from the denial of the inherent humanity and dignity of a black person (the Dred Scott case) to the denial of the inherent humanity and dignity of an unborn person (Roe v. Wade and Casey v. Planned Parenthood). These laws of the state contravene the laws of nature. That, in essence, first and foremost, is why they are unjust laws.

To borrow the language of the Declaration of Independence, natural law stems from “the Laws of Nature and of Nature’s God.” The American Founders believed this. They adhered to it. You cannot understand the Founding, America, and Americanism without understanding this.

In this, the Founders invoked a tradition dating back to the Old and New Testaments, to Aristotle and Cicero, to Augustine and Aquinas. And in particular, they were inspired by the natural law writings of 17th century Englishman John Locke. Mark Levin puts it this way: “Locke said, as have others, that natural law is forever and enduring, and man-made law, which may vary from place to place and time to time, clearly is not. That which is just and virtuous is just and virtuous regardless of the passage of laws or time.”

This flies in direct contrast to the principles (if we can call them “principles”) of modern secular progressivism, where truths (if we can call them “truths”) are said to evolve over time, and that what is deemed just and virtuous (if we can call it “just” and “virtuous”) is in a constant state of never-ending flux and evolution—of “progress”—that forever unfolds and that always mysteriously lies ahead in the future rather than in anything immutable from the past. This is why the likes of Edmund Burke and Russell Kirk—and the principles of conservatism—uphold the value of tradition, experience, and custom, so long as the traditions, experiences, and customs are grounded in the Laws of Nature and Nature’s God. Those are the permanent things, the first things, the fixed order knowable by reason and observable by the rules of nature and nature’s God.

Thus, as Levin notes, echoing the sentiments of Cicero, “natural law is superior to, and precedes, political and governmental institutions.” For instance, the Golden Rule—“Do unto others as you would have them do unto you”—is a universally recognized ethic. It is referred to as the Golden Rule because it is universally true and just.

Hence, to stick with my earlier examples: to own and enslave or kill and maim another human being is always wrong because it’s always wrong—you know it, you sense it, you feel it—no matter what a majority of nine black-robed jurists might say or what Barack Obama and Hillary Clinton and Nancy Pelosi and Barbara Boxer and Cecile Richards and the Democratic National Committee might say.

On the matter of slavery, no American was, of course, as important as Abraham Lincoln. And it’s vital to realize that Lincoln appealed to natural law. Levin quotes a beautiful statement from Lincoln made in Lewistown, Illinois in August 1858. Lincoln knew that the Founders knew that slavery was wrong, even if they could not muster the will or way to personally and politically extricate themselves from it in 1776. Nonetheless, as Lincoln knew, they established the moral basis for why it was wrong in their very words. As Lincoln said of the Founders:

In their enlightened belief, nothing stamped with the Divine image and likeness was sent into the world to be trodden on, and degraded, and imbruted by its fellows…. Wise statesmen as they were, they knew the tendency of prosperity to breed tyrants, and so they established these great self-evident truths, that when in the distant future some man, some faction, some interest should set up the doctrine that none but rich men, or none but white men, were entitled to life, liberty and the pursuit of happiness, their posterity might look up again to the Declaration of Independence and take course to renew the battle which their fathers began—so that truth, and justice, and mercy, and all the humane and Christian virtues might not be extinguished from the land; so that no man would hereafter dare to limit and circumscribe the great principles on which the temple of liberty was built.

Lincoln told his fellow countrymen that they may do with him whatever they chose, even “put me to death,” but they must nonetheless “heed these sacred principles.”

And that they remain: sacred. What is sacred should not be denied. Men can make laws of their own doing, but that doesn’t necessarily mean those laws are just, or sacred.

That’s only a snippet of what Mark Levin offers in this book. He states from the outset that he’s well aware that this book will not be changing the course of history, “but if it can open a few eyes it will have served its purpose.”

Well, given Mark Levin’s platform and influence, and ability to sell books, it should open more than a few eyes—especially those who have been blinded to these truths by our ghastly government schools and monolithically left-wing universities. That means that Levin, via this book, will be educating a substantial number of Americans on vital concepts like natural law. In that, he’s truly doing the Lord’s work.

(Editor’s note: A version of this article first appeared at American Spectator.)

About Dr. Paul Kengor 52 Articles
Dr. Paul Kengor is professor of political science and executive director of the Center for Vision & Values at Grove City College. His books include The Crusader: Ronald Reagan and the Fall of Communism, Dupes: How America’s Adversaries Have Manipulated Progressives for a Century, Takedown: From Communists to Progressives, How the Left Has Sabotaged Family and Marriage, and, most recently, The Devil and Karl Marx: Communism's Long March of Death, Deception, and Infiltration.

I recently met the good people of St. Benedict Elementary School in South Natick, Massachusetts, which offers classical Catholic education to some very fortunate youngsters. The extensive summer reading lists the school suggests to those […]

“Yours Is The Wisdom”: Pagans, Doctors, and Fathers

In classical Christian education circles, it is often asked why Christian students should bother with pagan authors. Who needs Virgil and Aristotle, so the question goes, when you’ve got the Church Fathers and Doctors? Like […]

From Evangelicalism to Feminism to Catholicism: A conversation with Abigail Favale

Dr. Abigail Rine Favale graduated from George Fox University with a philosophy degree in 2005, and then earned her doctorate at the University of St. Andrews in Scotland. She currently heads the William Penn Honors […]