Sally Read, who is English and now lives in Italy with her husband and family, is the author of several collections of poetry as well as the memoir Night’s Bright Darkness: A Modern Conversion Story, which is a beautifully written and often startling account of her journey from atheism to Catholicism. She recently corresponded with CWR about being a poet, the craft of writing, influences, and favorite authors.

CWR: You are known as a poet but have now written a major prose work. Was the creative process very different?

Sally Read: As a poet, I found writing prose very liberating. Poetry is a demanding genre because you’re cramming huge things into a very tight space. (Sylvia Plath described poets as expert suitcase packers.) Because of this, poetry is an excellent school for a prose writer; you’re used to having to be in control of language and saying a lot, effectively, in just a few words. Having said that, I think the creative process for this prose work (Night’s Bright Darkness) was very similar to that of a poem, because the form of the book is quite tight, and the juxtaposition of events and anecdotes is quite poetic.

CWR: In regard to your memoir, how long was it from conception through to publication? 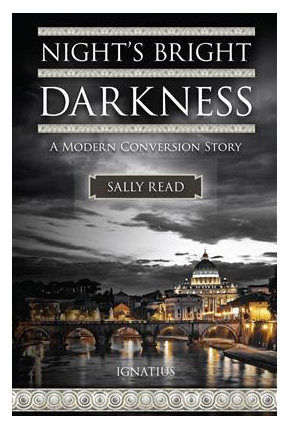 Sally Read: I started writing it in September 2014, and finished it in February 2015. I signed a contract with Ignatius Press in July 2015 and it came out in October 2016. I would say that such speed is atypical, and it reflects the hours of prayer and contemplation that came before and during the process. Also, and most importantly, the story was already written by God—and beautifully so. I just had to write it down to the best of my ability.

CWR: As a poet you are used to working in miniature, given the scale of your latest undertaking and the subject matter. Did you ever feel overwhelmed?

Sally Read: Strangely, no. Again, I would point to how prayerful the process was. Also, the structure of the experience (my conversion) is very poetic, and the story is true, so I had very concrete things to cling to in terms of both form and content. I’m writing fiction now, and that is, in some ways and on some days, more overwhelming because if you’re not careful you can slide off the rails.

CWR: How much time is spent in the actual creation of a poem?

Sally Read: It can vary from a few hours to, quite literally, years. Most of a poem is written when you’re lying in bed, sitting on a bus, or watching a Disney film for the tenth time (if you have children), and you’re thinking: “I wish I had a pen.” It’s not ever something you can start and finish in one go. I usually move through several drafts, and usually the form becomes tighter with each one. One long poem that I wrote in the voice of a holocaust survivor (whom I nursed) took ten years to write. Sometimes we have to grow up and mature in various ways in order to be able to carry the message adequately. And sometimes the distance of time is needed from an event in order to be able to transform it into art.

CWR: When and where do you write? Is there a set routine?

Sally Read: I used to be very rigid about always working in the morning—a lot of writers say that that is when they think clearest and when they are at their most creative. Since becoming a mother, I work when my daughter is in school, or out doing something. Hence, I’m much more flexible. (I also used to be very rigid about having a ‘room of my own’ in Virginia Woolf style. I have since discovered that any old corner will do, as long as everyone else is out.)

CWR: Where and when do ideas for the next project come to you?

Sally Read: It’s incredibly hard to say—but it’s always something that is of fundamental importance to me at that point in time, and I can think of nothing else. (I’m quite obsessive). I can never go looking for ideas; they have to come to me and it’s usually something very personal. So, my second book of poems was largely about my pregnancy and baby; my third was about patients I had nursed years ago who I couldn’t stop thinking about. The book I am writing now is a mystery in terms of provenance—but it is weirdly and subtly about things that are very pertinent to Catholics now: the relevancy of celibacy, the culture of death. Most of all it is about how pain and love shape people’s lives in both the (seeming) absence and presence of God.

CWR: Have you ever suffered writer’s block?

Sally Read: No. If I’m having trouble with a project I know I need to step away from it for a while. Perspective is everything in all forms of art, so sometimes doing nothing is very important—then you can see it with new eyes when you go back to it. I guess I might feel differently if I was working to a weekly deadline! Anyway, patience is everything, and the work of the unconscious should never be undervalued. (If a writer feels ‘blocked’ they are probably doing enormously important work in their head without realising it.)

CWR: How much, if any, does other media—music, film, art—feed your creative process?

Sally Read: None of those media feed me as much as life. I’d rather listen to a conversation on a bus, or at the back of a church. Life is always better crafted and more startling.

CWR: Who are your favourite authors?

CWR: What books would you recommend to writers?

Sally Read: The writer that writers always recommended to me was Raymond Carver, because his style is very clean. Chekhov and Hemingway would work too. The ABC of Reading, by Ezra Pound is a very good guide to being spare, and hence effective, with words. You don’t have to end up a very austere, clipped writer, but it’s a good place to begin. From those roots you can blossom into looser styles (like Woolf or Toni Morrison) if that’s your thing. But even with those wordier writers the music is very evident and controlled. You only get that from cultivating tight prose and making every word count.

CWR: What is your understanding of the writer’s vocation?

Sally Read: I think writers are there to understand the truth of life at a deep level and reflect it back in ways that will enrich, stimulate and entertain. Since converting, I’ve also seen it in spiritual terms—we’re there to highlight connections and patterns already present in God’s creation, and to portray them with love. That may sound soppy, but without love we can’t tell the truth. (God, the creator, being both truth and love). Love signifies a true knowing, and true understanding (as God knows and understands us), and that’s what writers are called to do—to know and understand.

CWR: If writing has taught you anything, what is it?

“Everyone is free to express their opinions, but that statue [of St. Nicholas of Myra] is a sign of an historical event and historical events cannot be cancelled.” This is how Fr. Giovanni Distante, prior […]

Confined to choose: A review of Journey to Freedom

The Russian soul is singularly situated toward an authentic understanding of freedom. Dostoevsky, Berdyaev, Solzhenitsyn and, most recently, Sergei Ovsiannikov, all endured the crucible of confinement. It was here—and not in the decadent pleasures of […]