There is something about a good conversion story. There are a number of well-known and popular conversion memoirs that have been published over the years, as well as collections of shorter-form conversion stories. These have in turn influenced the conversion journey of untold numbers of people, who have since found their way home to the Catholic Church. 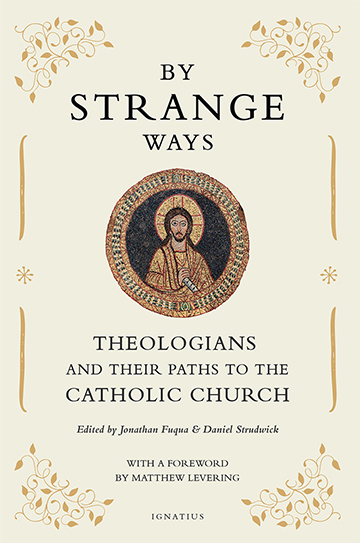 The conversion stories of ten theologians are collected in By Strange Ways: Theologians and Their Paths to the Catholic Church (Ignatius Press, 2022), edited by Dr. Jonathan Fuqua and Dr. Daniel Strudwick. The volume includes the conversion stories of such luminaries as Scott Hahn, Lawrence Feingold, Petroc Willey, Jeff Morrow, and more. The theologians featured here come from a variety of backgrounds: agnosticism, secularism, New Age thought, punk rock, and various stripes of Christianity.

Drs. Fuqua and Strudwick recently spoke with Catholic World Report about their recent book, and the evangelizing power of conversion stories.

Jonathan Fuqua and Daniel Strudwick: After the success of Jonathan’s first book on philosopher converts (Faith and Reason: Philosophers Explain Their Turn to Catholicism [Ignatius Press, 2019]), we began reflecting on how there was no book that dealt exclusively with theologian converts. We thought it would be good to provide a space for theologians to explain why they chose to become Catholic.

We also thought that many Catholics might find it interesting to follow these accounts and encounter the issues that they had to wrestle with as they made their journey.

Finally, we thought that intellectually minded folks who take religion and theology seriously might find the conversion accounts of theologians especially worth considering.

CWR: Why are conversion stories so appealing and intriguing to people?

Fuqua and Strudwick: Conversion stories are appealing and intriguing for three principal reasons.

First, we are, by nature, story-telling people; we are intrigued by the stories of others.  The Catholic philosopher Alasdair MacIntrye argues that our very understanding of ourselves as individuals is as characters in a story.  So, we tend to love hearing and telling stories.

Second, we are rational creatures who are also moved by reasons and reason-giving, and these conversion narratives provide a reasoned account of why one would become Catholic.  Conversion accounts often combine story and reason-giving and so tend to be very interesting.

Lastly, for one to convert, one must be able to see oneself in the Church. Through these stories, one can imagine how one might enter the Catholic Church oneself after seeing the path of others.

CWR: What is unique about these theologians’ paths to the Catholic Church? And how is it different from the paths of philosophers recounted in Faith and Reason: Philosophers Explain Their Turn to Catholicism?

Fuqua and Strudwick: The questions asked by philosophers in the Faith and Reason volume were more philosophically foundational, whereas the questions dealt with by the theologian converts tend to be more properly theological by nature.

For example, the philosophers were often drawn to the Church by encountering its profound development of philosophical issues relating to the nature and existence of God.

Theologians, by virtue or their prior Christian commitment, begin with revelation as a starting point. How revelation is understood is the content with which theologians wrestle. It should also be said that both are intertwined and thus that the differences between the two are more a matter of degree and not of kind.

CWR: Is there something inherent to the theological pursuit that leads to the Catholic Church? Put another way: given enough time, will every theologian honestly seeking the Truth eventually become Catholic?

Fuqua and Strudwick: If each thinker were able to approach these questions unimpeded by prejudices and biases, we would hope that all would eventually find their way into the Church. There are also various practical concerns that often make conversion very difficult for those who are deeply invested in a non-Catholic ministry or denomination.

Further, people can also be emotionally attached to their non-Catholic co-religionists, and thus converting to Catholicism would potentially lead to a rupture in important relationships.

Finally, contemporary academia tends to be highly specialized, and theologians are not exempt from this. So, some theologians might spend their entire careers teaching and writing about topics that are not central to Catholic-Protestant or Catholic-Orthodox issues.

CWR: In collecting and editing the contributions in this book, what did you learn?

Fuqua and Strudwick: Our title says something to this question. These are varied stories that don’t just involve a movement of the mind, but rather the whole person. The accounts do not follow a single pattern and are stories of men and women who found themselves surprised by the direction of their journey. In other words, God led them by strange ways.

The diverse features of Catholicism (aesthetics, morality, logical rigor, philosophical tradition, authority, liturgical life, etc.) were unique to each story in the sense that different converts tended to be drawn by different facets of the multi-faceted gem that is Catholicism.

The lesson is that there isn’t just one path into the Church and so we Catholics need to highlight the goodness, truth, and beauty of the Catholic tradition.

CWR: What do you hope people will get from the book?

Fuqua and Strudwick: We hope readers will see the Catholic harmony of faith and reason and the intellectual plausibility of Catholicism. We also hope that they will see how each of these contributors deeply appreciated their past and saw Catholicism as fulfilling and not denying truths that formed them on their road to the Catholic Church.

Fuqua and Strudwick: We think this book would be especially helpful to intellectually serious non-Catholic Christians who would like to discover the reasons that compelled professional theologians to enter the Church. The book also offers cradle Catholics a reasoned account of why Catholicism is attractive to those from the outside.

About Paul Senz 114 Articles
Paul Senz has an undergraduate degree from the University of Portland in music and theology and earned a Master of Arts in Pastoral Ministry from the same university. He has contributed to Catholic World Report, Our Sunday Visitor Newsweekly, The Priest Magazine, National Catholic Register, Catholic Herald, and other outlets. Paul lives in Elk City, OK, with his wife and their four children.