Philip F. Lawler is the editor of Catholic World News (CWN), part of Catholic Culture, which he founded in 1996, making it the first English-language Catholic news service operating on the internet. He offers regular analysis and commentary there, in addition to CWN’s daily news coverage. He is a past editor of Crisis magazine, as well as Catholic World Report during its days as a monthly print magazine. 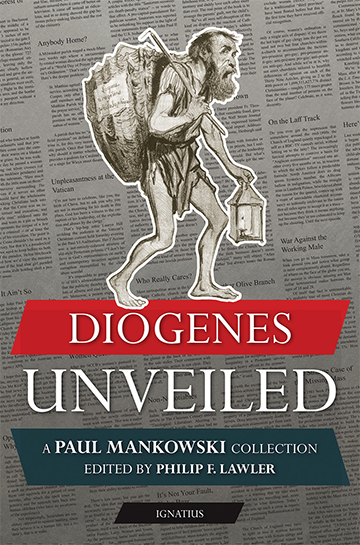 Father Mankowski was prolific, and many of his most incisive essays were written under the pseudonym “Diogenes”. Diogenes Unveiled collects many of his best satirical writings, showcasing his keen observations and biting wit.

Lawler recently spoke with Catholic World Report about this latest collection and the impact Fr. Mankowski continues to have through his writing.

Philip Lawler: Father Mankowski’s death was sudden and shocking, and many of his friends felt a need to talk to each other— mostly by email, since he died during the lockdown. We quickly reached a consensus that his work deserved more attention.

Ignatius Press asked me to put together a collection of his pseudonymous work, since so much of it was done for outlets that I edited: first the magazine Catholic World Report; then the online forum Catholic World News. I was delighted to oblige, not just as homage of a friend but also because I enjoyed the prospect of reading through all his witty comments again. Sure enough, it was a pleasure to collect some of his work, and even now, reading through some of the commentaries for the fourth or fifth time, I find myself chucking in appreciation.

CWR: Father Mankowski’s writing has gotten much more (and well-deserved) attention since his death, in large part due to the fact that so much of his writing was pseudonymous. Why did he write so much under a pseudonym?

Lawler: He was disciplined by his Jesuit superiors, and could not write freely under his own name. Later, when those superiors ordered him to stop writing under a pseudonym, he obeyed that order as well.

CWR: Father Mankowski wrote nearly 3,000 pseudonymous posts. Some of his writing under his own name were gathered in Jesuit at Large – do you think he felt a certain freedom writing as Diogenes?

Lawler: Yes. Even leaving the censorship aside, he was sometimes at his best when he was not constrained by scholarly courtesy and could indulge his penchant for satire— and sometimes for salty language.

CWR: When one reads Father Mankowski, one gets the sense that he never wasted a word, a keystroke, a jot or a tittle. In your knowledge of the man, is this a fair assessment? Even in his sarcastic, sardonic, almost satirical posts, did he take his writing seriously?

Lawler: Definitely. He was punctilious about grammar and usage. He was a linguist by training, after all; he loved the written and spoken word. He was a voracious reader, and his favorites were great stylists. I recall that his surmise that Evelyn Waugh was incapable of writing an uninteresting sentence. He aimed at the same goal.

CWR: What benefit is there in reading Father’s writings now, sometimes many years after the pieces were first composed? In other words, do his insights on these issues still have something to teach us?

Lawler: Yes. Some of the punchiest “Diogenes” commentaries were time-sensitive, and might not be understood today. But in editing this collection, I chose pieces that I thought an ordinary reader could understand in 2022, even if they were written about events that took place a couple of decades earlier.

More to the point, “Uncle Di” was usually trying to make a broader point, saying something about the nature of our faith, looking beyond the specifics of the particular subject. Anyone who reads this book will see that, I think.

CWR: With such a massive amount of material to choose from, how challenging was it to decide which pieces to include in this volume?

Lawler: Very. There’s still a lot of good material on the cutting-room floor, as it were. I had to make some painful decisions to keep the book at a reasonable length.

CWR: What do you hope readers will get from this book?

Lawler: First, I hope readers have some fun. I’ve warned people not to take a sip of hot coffee before sitting down with this book; there’s a real danger of explosive laughter.

Then they should gain a clear and uncompromising perspective of what it means to be a believing Catholic. Diogenes has a lively wit and a sense of the absurd, but he’s quite serious about defending the truths of the faith, and puncturing the pretenses of its critics.

Finally, they should come to appreciate how well informed Father Mankowski was, and how acute were his perceptions. A careful reader, taking note of when these pieces were written, will notice that again and again, “Uncle Di” recognizes trends very early on. He saw where the argument was going, long before others did. Read his comments on the sex-abuse scandal, or on gender ideology, or on curbs on free speech in academic life, and you recognize that he was more than a bit prophetic.

Lawler: Commentary by Diogenes makes up the bulk of the book. But I deliberately put some other material at the beginning and end of the collection, to give readers a bit more insight into the character of the author. At the front, there are his two reports on the way he chose to spend his “vacations,” serving with Mother Teresa’s nuns in desperately poor communities in Romania and Armenia. It’s important for readers to understand at the outset that Father Mankowski was a very dedicated and self-sacrificing priest.

Then, at the end of the book, I’ve included a couple of different pieces. First, a devastating critique of Elaine Pagels, the editor of the Gnostic Gospels, which provides a glimpse of his scholarly credentials. Then the grand finale: “The Tragedy of Macbeth”, a little four-act play. I don’t know how to describe it; it’s astonishing. He wrote it just for fun— which is the best reason to read it.

Meriol Trevor (1919-2000), who was an Oxford-educated Catholic convert, wrote numerous books for children and adults, and Lights in a Dark Town: A Story About […]

How the Mystery of the Trinity illuminates the mystery of atonement

Margaret M. Turek, S.T.D., is Professor of Theology and Chair of Dogmatic Theology at St. Patrick’s Seminary and University. After studying and earning degrees at the University of San Francisco (where she studied in the […]