Given Gen Z’s distrust of organized religion, it may seem incongruous to call Gen Z “religiously complex.” How can someone be religious at all when they don’t trust religion? Yet even with their great distrust in organized religion, 71% of Gen Z still consider themselves at least slightly religious.1 This interest in religion does not mean that most Gen Z youths have conducted a comprehensive and in-depth investigation of various religious beliefs and institutions. Instead, Gen Z is religiously complex because they often hold confused and even contradictory beliefs about religion. This complexity makes it hard to categorize Gen Z and even harder to meaningfully engage with these youths.

In previous articles, we discussed the lack of adult figures and the growing distrust in institutions, both of which contribute to the bewilderment of this generation. But instead of looking for more causes in this article, we will simply observe the confused and complex mix of religious identities, affiliations, and curiosities of Gen Z. This information is meant to help parents, mentors, teachers, and pastors gain a more nuanced and comprehensive understanding of this generation. This knowledge is necessary if we are to walk with the youth and guide them out of the darkness and toward the light of Christ.

God and the Scriptures

In 2021, Springtide Research Institute asked 10,000 Gen Z youth “which statement comes closest to expressing what you believe about a higher power—whether it be God, gods, or some other divine source of universal energy?” The results were fascinating: A full 54% of these youths expressed greater doubt or disbelief in God’s existence than belief in His existence, and just 23% said that they believed in a higher power and had no doubts.2

Interestingly, this year the American Bible Society found that 76% of Gen Z had at least some curiosity about the Bible and Jesus. Even more surprisingly, they noted that 52% of Gen Z youths said that they were extremely or very curious about the Bible and Jesus. By comparison, only 35% of Millennials and 39% of Gen X were extremely or very interested.6 Consequently, even though Gen Z is less likely to believe in God’s existence than previous generations, their interest in Christ and the Bible is much greater than both Millennials and Gen X.

And this is not the only anomaly because Gen Z youths are more likely than Millennials to say that the Bible is the inspired word of God and has no errors.7 Yet, Gen Z is less likely than previous generations to say that reading the Bible is an important component of a child’s character development.8 So, why do Gen Z youth read the Bible? Well, only 1% of Gen Z say that they read the Bible to help them discern God’s will for their lives, but 24% say that they read it because they need comfort and 38% say because it brings them closer to God.9 When compared to Millennials, Gen Z is more likely to believe that the Scriptures are inspired, but less likely to see the Scripture’s practical import, except in so far as it can comfort them or bring them closer to God. 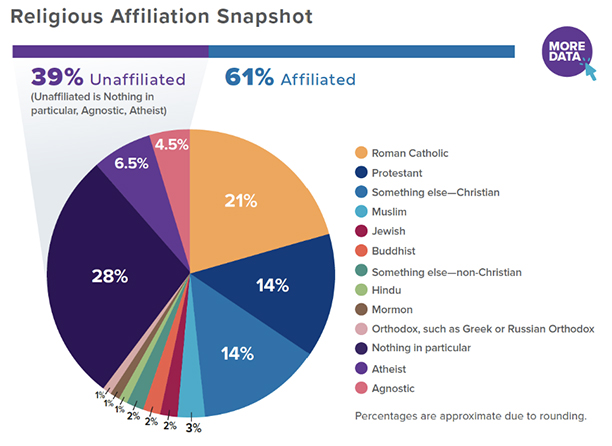 2) The second largest affiliation among Gen Z youth is Roman Catholic (21%). This percentage is even more significant when we see that only 28% of Gen Z youth say that they are Christian in some other regard. Collectively, Christians and Catholics only make up 49% of Gen Z. This means that only half of this generation are affiliated with Christianity in some form, but almost half of those are Catholics. Consequently, young Catholics are a central and influential part of this generation.

3) There is a wide range of religious affiliations. However, these categories are not always exclusive. In fact, 47% of young people say that they feel like they could fit in with many different religions.11 This indeterminacy means that this generation often adopts religious beliefs from a variety of sources. For example, some may hold a Buddhist position on one issue and a Catholic position on another.

4) Among Gen Z Christians, there is a difference between those who consider themselves “something else—Christian” and those who are uniquely “Protestant.” Many surveys do not make this distinction, even though it is very important for properly understanding the state of Christianity in this generation. Those who are Protestant are those who are more likely to belong to a particular denomination, whereas those who are “just Christian” simply consider themselves spiritual. They are Christian in a more generic sense and may believe that Jesus is God or possibly just a good person and moral teacher.

While distinguishing between Gen Z’s religious identities is insightful, the most interesting part of Springtide’s study comes from their follow-up data. 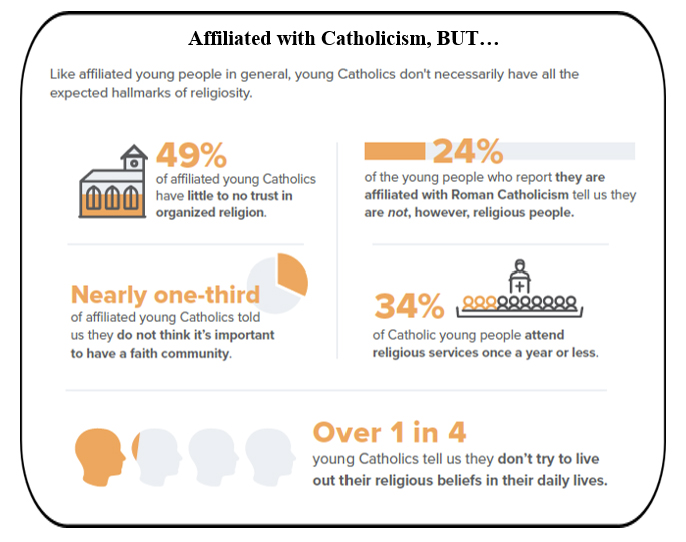 A similar pattern of belief and practice is found in Gen Z Catholics. Yet, when compared to those who are affiliated with religion in general, Gen Z Catholics are even more likely to say that they are not religious people and do not try to live their religious beliefs in their daily lives. Unfortunately for many Gen Z Catholics, their affiliation with the Catholic Church does not mean that their faith is alive. They may have received the sacraments, but their faith is lying dormant, and it must be kindled so that they can be set on fire for God.15

The review of the recent research done by Springtide, Pew Research, and American Bible Society shows the religious confusion and complexity of this generation. Fortunately, many Gen Z youth recognize this confusion and are curious. While the last article of this series will offer several suggestions on how to best dialogue with this generation, there are two qualities we should put into practice now.

First, we should be prepared for Gen Z’s questions. In the first two articles in this series, we have seen that we must have healthy relationships with the youth and regain their trust. Once these two elements have been established, there will be opportunities for fruitful dialogue. We must learn how to dialogue with them without lecturing them, which often means that we listen to them and wait for their specific questions or an opportunity to share a different perspective. This kind of response requires us to have both knowledge and prudence, neither of which can be gained passively. Instead, we must take the time to study our faith through regular reading and research. Most importantly, this preparation requires time alone with Christ in prayer when we ask for His grace and for opportunities to reach these youths.

Second, we must be humble. As their mentors, we have the grave responsibility and privilege to guide the youth. But this certainly does not mean that we have all the answers. We are still God’s humble instruments and servants to the truth. Therefore, we should be open to learning from Gen Z. Their questions and observations can bring us to a fuller understanding of the truth, and their curiosity can push us to know and practice our faith more deeply. Ultimately, mentors who are prepared, humble, convicted of the truth, and model an integrated life of faith are those who are most capable of changing the hearts and minds of this generation.

About Benjamin Eriksen 4 Articles
Benjamin Eriksen, M.A., is a doctoral candidate in philosophy at The Catholic University of America. He has taught high school and college students for several years and is a senior catechetical writer for the Word of Life series.

Jesus: Our Friend and Our Food

A few years ago, I would regularly see a billboard on I-94 near Detroit Metropolitan Airport that had a picture of a woman holding a chicken. The woman and the chicken were nose-to-beak, looking into […]

What is behind the increase in “witches” in the US?

As the number of self-identified witches in the United States has surpassed the number of Presbyterians, it is helpful to recall G.K. Chesterton’s adage that when we stop believing in God, we begin to believe […]

Can a Catholic university be too Catholic?

Consultants have reportedly told CUA faculty that commitment to a Catholic identity “hurts” the school’s brand. The evidence suggests otherwise. […]