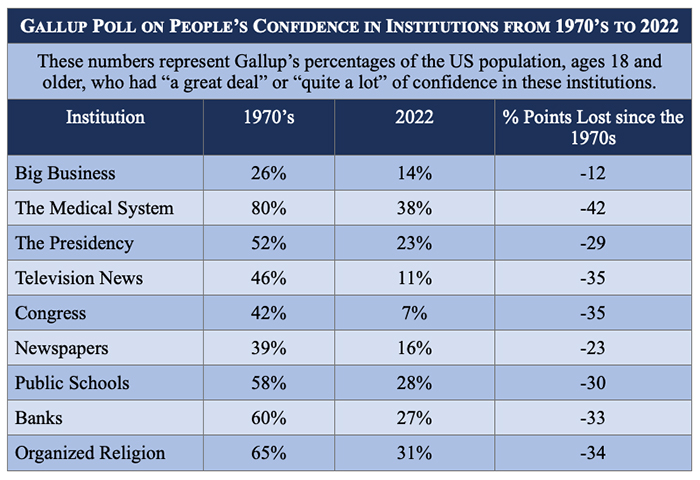 Many may attribute this loss of confidence in institutions to recent events. However, this increasing trend of distrust predated the pandemic and has been happening for decades. One of the few exceptions was a slight boost in confidence in 2020. Yet despite these small variations, the percentage of U.S. citizens who say that they have a great deal of confidence in all major U.S. institutions has fallen from 48% in 1979 to 27% in 2022.4 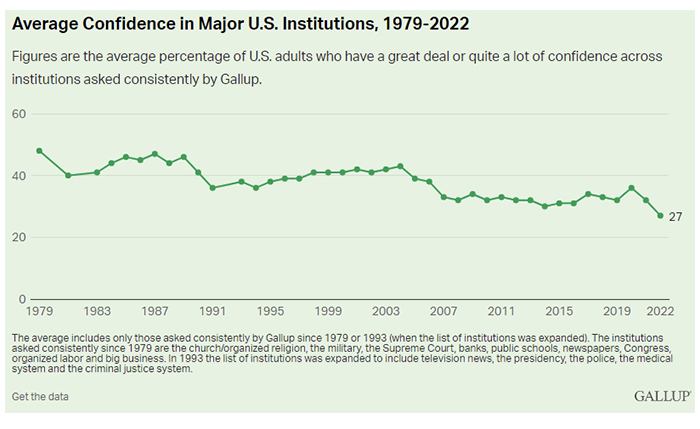 Growing Up with Gen Z

So how does this loss of confidence in institutions impact Gen Z? Well, like the rest of the population, their trust in institutions is just as low, if not lower, and part of this distrust comes from their social upbringing. When we look at the average confidence in major U.S. institutions over the past forty years, we see a sharp decline in trust from 2003 to 2008, which occurred during the early years and childhood of Gen Z. While it is difficult to pinpoint which specific factors led to this distrust, there were some notable events that certainly contributed to this loss of confidence: the 2003 crash of the spaceship Columbia, the CIA’s abuse of the Abu Ghraib prisoners in 2004, the 2005 Terri Schiavo case, the botched response to hurricane Katrina in 2005, and finally the dawning of the Great Recession and the 2008 stock market plunge.

During this time, there was also growing disillusion with the government and the Church. While there was initially strong support for the wars in Afghanistan and Iraq, this support started to wane over the mid- to late 2000s, especially when no weapons of mass destruction were found in Iraq.5 The high approval rating President Bush initially held after 9/11 also gradually declined in the ensuing years.6 Moreover, the Church herself was rocked with a series of priest scandals in the mid- to late 2000s as the Holy See examined many accounts of clerical abuse. These scandals also involved some members of the hierarchy who either ignored or actively covered up abuse.

While Gen Z may not remember these events explicitly, this loss of confidence in our institutions certainly affected the adults around them and the social climate in which Gen Z was raised. Moreover, the overall trust in institutions has never rebounded since 2003. Instead, it continues to go downhill.

The loss of confidence in our institutions has greatly affected Gen Z in many ways, but this article focuses on three significant consequences. 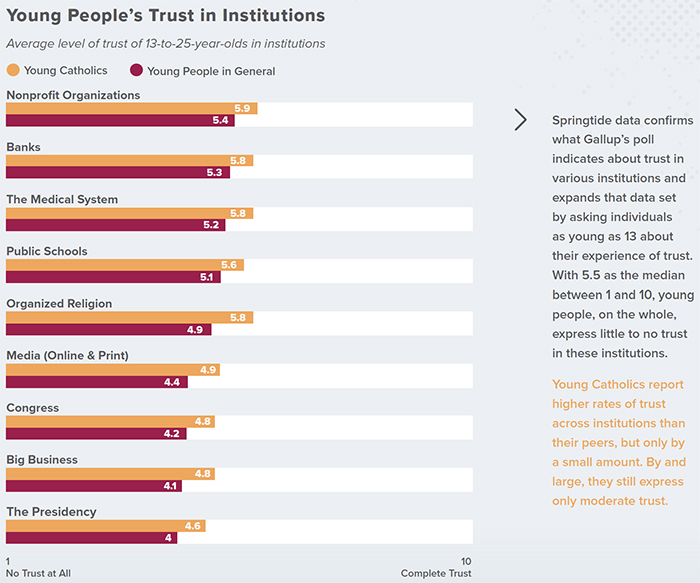 Second, because they can no longer trust institutions, Gen Z youth are becoming more politically active. Many of them believe that the systems and institutions have failed them personally, and thus they feel that it is just, and even necessary, to advocate for social change. Indeed, 59% of Gen Z youths and 69% of Catholic youths say that their personal experiences make them passionate about political issues.9 Moreover, 45% of Gen Z and 57% of Catholic youths wish that adults would discuss politics with them more.10 While many adults tend to dismiss political conversations with Gen Z, these discussions are of immense importance. We need to have political conversations with members of Gen Z, not just because each of them has innate dignity and deserves the respect of having their views heard, but also because Gen Z will be voting in greater numbers as they approach adulthood.

Third, in addition to political activism, this generation has turned to various groups, hobbies, and fandoms to find a sense of belonging. Previous generations often looked to their Church, their family, and even their country and local government for a sense of community and purpose. But having lost trust in these organizations, many Gen Z youth are turning increasingly to small groups, fandoms, and action groups for their sense of meaning and community.11 To these young people, their identity as a ski enthusiast, miniature hobbyist, environmentalist, or Star Wars fan means more than their identity as a patriot or Christian. Many may even find more meaning in a Marvel movie than in a story about a martyr or soldier at war. Some may get up early to play a sport with their team, but do not get up to pray or go to Mass. Now, these hobbies and fandoms are not entirely bad; personally, I am a huge fan of Star Wars and Lord of the Rings. But this generation needs to know that their identity as children of God, Americans, and members of their families means much more than what hobby, action group, or fandom they identify with.

These statistics become even more shocking when compared to the older generations. In 2021, Gallup conducted a similar poll that showed that 30% adults (18 years and older) said that they had “little to no trust” in organized religion whereas 19% had “a great deal” of trust.13 Therefore, Gen Z’s distrust in organized religion is twenty-two points higher than that older generations.14

So, why have over half of the Gen Z youths lost faith and confidence in organized religion? Certainly, their societal upbringing is one cause, but when we listen to Gen Z, we find that there are several other causes:

In the end, the best way to recover the trust of Gen Z youths is actually quite simple: We must establish true, authentic, and charitable relationships with them. Eighty-four percent of Gen Z Catholics agree that “fostering and working on a relationship is an important part of trust.”21

While some are tempted to mock Gen Z, along with their interests, skepticism, and desire to feel safe, such a reaction only exacerbates the problem. Instead of belittling this generation, we need to first make them feel safe, cared for, heard, and respected. It is only once we have built back their trust through our genuine love and concern that we can then challenge them to live courageously, heroically, and even at times perilously for the truth that is greater than themselves.

Previously in this series:
• “Walking with Generation Z: Understanding the Loneliest Generation” (August 11, 2022) by Benjamin Eriksen

4 Jones, “Confidence in U.S. Institutions Down; Average at New Low.”

14 Note that this difference may even be greater given that some Gen Z were included in the Gallup poll which received input from people ages 18 and up.

About Benjamin Eriksen 4 Articles
Benjamin Eriksen, M.A., is a doctoral candidate in philosophy at The Catholic University of America. He has taught high school and college students for several years and is a senior catechetical writer for the Word of Life series.

Given Gen Z’s distrust of organized religion, it may seem incongruous to call Gen Z “religiously complex.” How can someone be religious at all when they don’t trust religion? Yet even with their great distrust […]

Generation Z is approaching adulthood. Those born between 1997 and 2012 now fill our middle schools, high schools, and colleges. Unlike previous generations, Gen Z was raised with the internet at their fingertips and iPads […]

Every loving parent wants their child to flourish. Parents want their children to be happy in this life and truly fulfilled in the life to come. Yet, the youth of the upcoming generation are not […]