Professor, translator, and writer Anthony Esolen takes on a multitude of lies about men and patriarchy in this perceptive and sensible book. Esolen bases his argument on the traditional wisdom of the ages, particularly from Western culture. This is a wisdom that accepts the nature of things, that boys will be boys and girls will be girls.

The author does not allow feminist attacks on men and patriarchy to take over his own discussion. This enables him to maintain a positive, assertive tone. His realist position, as opposed to a relativist one, derives from the fact that the truth is the truth, and that all attempts at denying this truth hurt both men and women.

The many references in No Apologies to literature show that Western culture has traditionally accepted patriarchy as a given. This should be heartwarming for those of us who often perceive Western countries like Canada or Sweden to be hopelessly feminiz 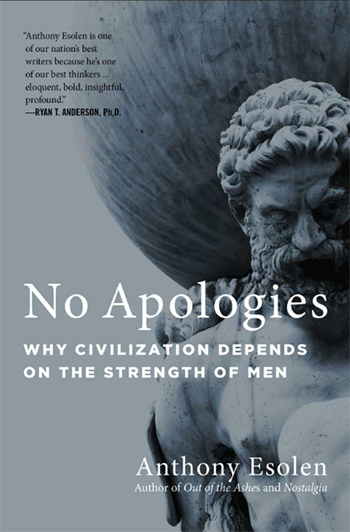 ed. Such countries have hearty past traditions that can be renewed.

Esolen’s references to history and literature also highlight how Western men and women rest on the shoulders of giants, and that our culture was built by masculine men and feminine women. The key to a renewed Western society is the return to this authentic masculinity and femininity.

Esolen is never defensive in his tone and approach. Instead, he patiently deconstructs the central pillars of popular feminist lies about men and patriarchy. Many of these lies are based on denying fundamental differences between men and women. This denial leads to a lack of curiosity from feminists about the perspectives of men: “the feminists ignore or deny the biological and physical imperatives, and indeed they show little desire to imagine what it might be like to inhabit a male body, with its vast array of differences from their own.” Esolen argues that these male-female differences are to be celebrated and used to our full advantage, not to be minimized or considered deformed.

The first chapter, titled Strength, celebrates the achievements of men, and how men’s risk-taking, adventurous natures, and strength and initiative make economic development and modern life possible. Men design, build, and manage things because it is in their nature to do so. Evoking the image of men putting up a barn in an afternoon, Esolen notes: “Such work is not achieved by the marginal. It is achieved by the great and obvious normal.”

The next chapter, Agency, discusses how “restless masculine activity” changes “the face of the earth.” Esolen gives the example of farmers in Quebec working in unison to do the hard work of uprooting the trees of a woodland so they could plant crops. He celebrates the achievements of Europeans in coming to North America and making the most of the fertile land here.

This masculine work in unison foreshadows the following chapter, The Team. Here Esolen discusses the unique attributes of men that allow them to bond in hierarchical formations that are honor- and duty-bound and that serve a purpose that transcends the individual man. This bond of masculine camaraderie, “which is not like what a man feels for a woman of what women feel for one another,” again highlights male-female distinctions.

Esolen refers repeatedly to transcendence. He identifies it as another element in the male-female spectrum, with immanence, at the other end, typically more widespread among women.

Chapter four, The Family, discusses how it is in the family that a man really becomes a man. The patriarchy, which is a good thing, takes on its most basic and clearest form here. Esolen again underscores male-female differences: “there is truly an asymmetry between motherhood and fatherhood, and it suggests to us what intellectual, spiritual, and social power is implied in patriarchy. For the father … must make a vow, a promise that the mother does not have to make.”

This vow, which implies a choice, includes the possibility of refusal – the father’s potential refusal to take on the responsibilities of fatherhood by making this vow in the first place. This refusal is at the heart of America’s present social decay, as fatherless boys and girls do not grow up with the same psychological, social, or financial support that children from father-led families do.

Esolen then weaves together a few seemingly unrelated strands, many of which relate back to the previous chapter’s topic. Chapter five (The Vision) is perhaps the most insightful part of No Apologies. It is also the most abstract in the appraisal of male-female differentiation: “Men do not see colors with the same boldness that women do. Women do not see things in distant and coordinated motion as keenly as men do. Men often miss the trees for the forest. Women often miss the forest for the trees.”

The most amusing point of this chapter is the oft-told story of St. Thomas Aquinas at the court of French King (and saint) Louis IX, and how, transfixed in deep thought, the friar suddenly bangs his fist on the table and shouts out, “Thus are the Manicheans refuted!”, whereupon the king directs a servant to bring a quill and paper to the saint. Such a man as Aquinas, Esolen points out, would be incapable of taking care of a baby, but this is an example, however extreme, of male-female difference: “We should not expect a Thomas to be a Mary.”

Chapter six, The Father in Heaven, shows the strong connection between theology and anthropology. What we believe about God strongly impacts what we believe about human nature, including about the sexes. Esolen refers once again to transcendence. As with the previous chapter, some ideas are rather abstract. This does not make them less true or less powerful.

Esolen refutes the feminist belief that “the personal is the political,” a fascist statement if there ever was one. Just as policymakers often need to take an impersonal stance on things, so “the personal cannot thrive, cannot be its beautiful self, if it is forced into the levers and pulleys of the political game.” Such insights help us see that abstract thoughts, as feminists and others in the ivory towers are wont to have, have real-world consequences.

One weakness of No Apologies is that Esolen, a Catholic, does not really analyze how feminized the Church has become. The crisis of the parishes includes the ever-expansive claims of modern women who push their daughters into being altar girls or who enter sacred areas around the altar and during Mass that were formerly the sole preserve of the clergy. This feminization has undoubtedly played a notable role in the apathy of so many boys and men toward church and faith.

Esolen reveals the hollowness of feminism’s messages about men and patriarchy. He has hope that the truth shall prevail in the end. His calm, reasoned, and wise way of addressing various lies and venomous envy is the most convincing means of putting forth his message.

No Apologies: Why Civilization Depends on the Strength of Men
By Anthony Esolen
Regnery Gateway, 2022
Hardcover, 192 pages.