I have never been a fan of emphasizing “vocation” for the laity. My dissent is rooted in two places, I think.

First, quite honestly, my personality type, which is all about preparing, but averse to planning. Some might call this “reactive,” I prefer to think of it as responding to the Spirit.

Of course God calls and leads us. But it seems to me, from Scripture and the 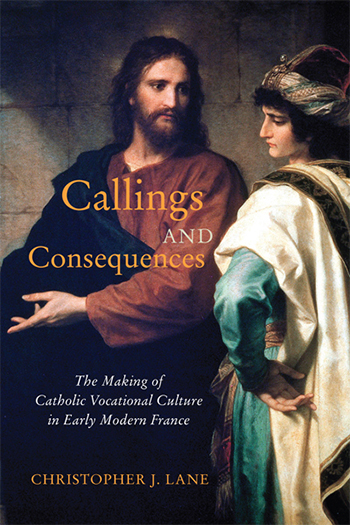 example of the saints, that this calling is mostly about the particular moment we are in and the people and circumstances that surround us. This can certainly have long-term effects and might put us on a path that lasts the rest of our lives on earth, but the emphasis is not on any sense of: this thing that God is calling me to do for the rest of my life but rather for the rest of my life I will respond to what God calls me to in any given moment.

It also strikes me that intense discernment of “vocation” in the world is a luxury good, an expression of privilege. And in the modern world of self-fulfillment, quite often twisted into a baptized version of privileged “life journey,” and a way to avoid serving and meeting the needs of those right in front of us, right now.

There is, I think, a spiritually healthy way of talking about lay vocation in the world, but it’s not a way that centers on personal fulfillment. It challenges us to ask: “What does the world need? What do the people in this world need? How can I help? How must I help?”

But you’ve heard all of that before. This is all an introduction to a brief discussion of a book I read last week, Callings and Consequences: The Making of Catholic Vocational Culture in Early Modern France (McGill-Queen’s University Press, 2021) by Christopher J. Lane, who is associate professor of history at Christendom College.

Exciting! Well, it was interesting. From the book’s description:

The concept of vocation in an early modern setting calls to mind the priesthood or religious life in a monastery or cloister; to be “called” by God meant to leave the concerns of the world behind. Beginning in the mid-seventeenth century, French Catholic clergy began to promote the innovative idea that everyone, even an ordinary layperson, was called to a vocation or “state of life” and that discerning this call correctly had implications for one’s happiness and salvation, and for the social good.

In Callings and Consequences Christopher Lane analyzes the origins, growth, and influence of a culture of vocation that became a central component of the Catholic Reformation and its legacy in France. The reformers’ new vision of the choice of a state of life was marked by four characteristics: urgency (the realization that one’s soul was at stake), inclusiveness (the belief that everyone, including lay people, was called by God), method (the use of proven discernment practices), and liberty (the belief that this choice must be free from coercion, especially by parents). No mere passing phenomena, these vocational reforms engendered enduring beliefs and practices within the repertoire of global Catholic modernity, even to the present day.

The book is not just about the laity, but about how discourse—and processes—related to religious vocations as well, shifted during this period. What was at play was that early Modern tension between the importance of the individual and authority, including parental authority.

Two points I want to share in this space:

First, these reformers sense, as Lane puts it, of the urgency of a proper attitude towards vocational discernment (and remember we are including the laity here, which these writers did)—reflecting the problems that result from people following vocations to which they were not actually called—think individuals entering religious life because of family expectations or pressure or worldly gain, resulting in a church weighted by corruption.

Secondly, related to the individual, was the conviction that God would call one to a vocation that made it “easier” in a sense, to attain salvation, and to discern wrongly—or be manipulated or coerced into the wrong vocation—would put one’s soul at risk.

Vocation, in this rigorist context, became the means by which God determined the graces particularly needed by each person. Choosing the wrong vocation would be to reject the graces needed for one’s salvation.

… Since those who had chosen wrongly would not be equipped to fulfill the duties of their respective states of life, the needs of others would be unmet. As Clugny, for example, explained in Pauline terms, good vocational choices enacted God’s providential plan for a church composed of various members: “The diversity of states and the variety of kinds of life make the church subsist and give it its beauty. If a body had nothing but eyes or feet, it would be monstrous. we are all members of a Body, of which Jesus Christ is the Head.”. When Christians failed to follow God’s call, they were rebellious members of Christ’s body, like a foot trying to be an eye. Especially worrisome in the post-Tridentine era of clerical reform was entrance into the priesthood without a vocation. Hence Claude ply’s catechism warned that parents who forced their sons to be clerics would have to “answer before God for the scandal that their children give to the whole Church..”‘

Right vocational choices were therefore no private matter, between God and the individual. Rigorist vocational reformers hoped not only that more individuals might be saved, but that the body of the church might be healed. Bad priests led Christians into sin more readily than anyone else. Bad religious and laity were no help, either. If no priest, religious, or lay person could be good without the grace of vocation, then ongoing Catholic reform demanded that young Catholics learn to discern rightly God’s will for their lives. Catholic vocational culture in France needed to be remade.

Rigorist vocational reformers therefore sought to normalize vocational discernment, and one of the biggest challenges in doing so was the effort to Instill the idea that each person was called to a state of life, including all laymen and women. vocational rigorists sought to leave no space for a mediocre laity, and so they offered an inclusive framework for lay vocation…

You can see where this comes from in the post-Protestant Reformation era, an era of now Catholic self-examination and reformation—also an era (in terms of the laity) of slightly more choice—for males of a certain social and economic level, at least.

But into the anxiety steps our friend Francis de Sales, who has a slightly different view. He assumes vocation, of course, and the importance of discernment—but then cautions against stressing out about it. Even with something as serious as vocational discernment, “excessive discernment was harmful and the will of Go could not be found simply ‘by force of examination and subtlety of discourse,’ that is, by an unending and convoluted interior search, relying exclusively on one’s own mind.” (33)

Jane de Chantal reflects this mindset—not surprisingly—as she consistently reminds us to stop thinking so much about ourselves: Anyone can see that all this is simply self-love seeking its satisfaction.

De Sales recommends a simpler process involving prayer and taking counsel—and then going forward. Also of importance is de Sale’s assertion that even when a “wrong” decision is made, God can bring good fruit: “Yet more surprisingly, a good vocation might come out of bad motives….In short, a sincere will to continue living in this state would render moot any imperfections in choosing to enter it.” (34). Lane writes of de Sales:

He emphasized the simplicity of the decision and the abundance of God’s grace, even if one ended up in a state of life for the wrong reasons. The choice of a state was thus a serious choice, but not the hinge on which all one’s life and eternity depended; perfection was possible in every state, and God was generous to all who turned to him. (34)

Yes, each and every one of us called by God—today. Right now. And more than likely, it’s a call related to the people sitting in the next room or at the next cubicle. Any big steps we take begin here.

As de Sales says in another context:

My God ! dear daughter, do not examine whether what you do is little or much, good or ill, provided it is not sin, and that in good faith you will to do it for God. As much as you can, do perfectly what you do, but when it is done, think of it no more ; rather think of what is to be done quite simply in the way of God, and do not torment your spirit.

(Editor’s note: This essay was first posted on May 7, 2022, on the author’s blog, Charlotte was Both, and is published here in slightly different form with her permission.)

About Amy Welborn 27 Articles
Amy Welborn is the author of over twenty books on Catholic spirituality and practice, and has written extensively on gender issues at her blog, Charlotte was Both.