With the world in turmoil following Russia’s invasion of Ukraine, it is worth noting just how singularly unfitted the current Western elite is for coping with the current disaster in Eastern Europe, precisely because the visceral issues at stake – nationality, patriotism, ethnic identity, borders, religion – are issues that the “globally-minded” political functionary refuses to take seriously on their own terms. 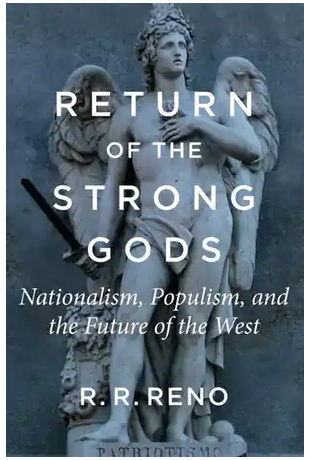 We can set aside the case made by various scholars and foreign policy experts, who have been arguing for years that the imperatives of globalism and NATO expansion has paved the way for this crisis of Russo-American relations. What is positively surreal is to find an American political class – which at home incessantly denounces love of homeland and national identity as small-minded, if not racist – now pretending to understand and empathize with the sentiments of Ukrainian citizens taking up arms to defend their territory. Since when have neoliberals or neoconservatives commended an old-fashioned devotion to one’s homeland?

A couple years ago First Things editor R.R. Reno presciently took it upon himself to explain the state of the West in Return of the Strong Gods. As Reno observes, ever since World War II Americans and Europeans have been dominated by a “postwar consensus” that insists upon fighting the last war, against Hitler and the Nazis, instead of recognizing the new threat to mankind posed by atomizing, secular liberalism, radical egalitarianism, and dehumanizing technologies.

the postwar consensus is more than political. Its powerful cultural influence is evident in the emphasis on openness and weakening in highly theorized literary criticism and cultural studies in universities, often under the flag of critique and deconstruction, and in popular calls for diversity, multiculturalism, and inclusivity, all of which entail a weakening of boundaries and opening of borders.

For the benefit of readers unfamiliar with postwar intellectual history, Reno relates the ascendance of figures such as Karl Popper – author of The Open Society and Its Enemies – as well as the neo-Marxists of the Frankfort School, and libertarian Friedrich Hayek. All of these thinkers were deeply suspicious, even hostile toward transcendent aspirations, for they saw such aspirations as potentially fascist. Where religion, patriotism, tradition, and other passionate devotions were once regarded as sources of human enrichment, they are now seen first and foremost as threats to the rights of the individual.

Thus arose the ideal of “negative piety, which gives priority to critique and self-questioning over conviction.” This negative piety is directed against the Church no less than against the nation, Reno explains, for it “guards against resurgent authoritarianism by renouncing metaphysical claims. After all, someone who defines an end or purpose for man becomes a black-and-white thinker, a potential fascist.”

Yet in practice, he argues, “a too rigorously anti-utopian outlook is itself dangerously utopian,” and leads to sociopolitical dysfunction:

The nations of Europe are experiencing a profound demographic change. Since 1945, people from non-European lands have immigrated to the West in large numbers. Some have come in accord with government policies put in place decades ago to deal with labor shortages. Others are being settled as a result of emergency measures to accommodate refugees from the war-torn Middle East. Still others arrive illegally […] For more than fifty years, voters in Europe have told their leaders that they don’t like the cultural changes caused by immigration and they don’t want more immigrants. The politicians consistently promise to reduce the inflow. But they never do. In many instances, the leadership class pushes in the opposite direction, toward more immigration, while it celebrates “diversity” as redemptive.

So, well before the Russian invasion, many European countries were in the process of getting wiped off the map, or transformed beyond recognition, all in the name of diversity, and with not only the acquiescence but often the active collaboration of Western leaders. In Reno’s words, such leaders exhibit a “strange inability” to “affirm their loyalty to the people they lead.” It is hardly clear why anyone should count on a Bush, a Biden, or a Macron to prudently and responsibly provide for Ukrainian sovereignty and national identity when such leaders actively undermine that of their own nations.

Going deeper, Reno argues that the patriotic sentiment is best understood as rooted in but not limited to nature. “Human beings are by nature social animals,” he points out, and so,

My parents, grandparents, and ancestors before them are in a real sense far more necessary to me than my generic humanity, so much so that I’m far more likely to sacrifice my life for my blood relations than for someone outside the family circle, however equal he may be in the eyes of God. This is at once an obvious point about human nature — blood is thicker than water, as folk wisdom puts it — and something remarkable[…] It’s not simply a metaphor to speak of our motherlands and fatherlands. Here as well the power of the “we” transcends biology. Nations unite clans and tribes, villages and provinces. They can incorporate newcomers by “naturalizing” them, a process of civic adoption, as it were.

Here proponents of Popper’s Open Society might object that such attachments can turn into idols for fanatics. The Christian response is that anything – not only ancestors, or nation, but also “generic humanity,” as well as a heart-rending image served up by a manipulative mass-media, or an abstract principle like freedom or equality – can become an idol when made the object of disordered love. Even so, abuse does not invalidate proper use. As C.S. Lewis put it, it is the true patriot who is best equipped to resist jingoism, precisely because the true patriot actually knows what patriotism is.

Certainly there are limits to Reno’s analysis. For instance, he is clearly reluctant to admit that in America, ground zero for the “disenchantment” with homeland is the American South, which has for decades been subjected by the liberal establishment to a one-sided and simplistic demonization campaign. And while Reno is entirely correct to note that “the open society alone fails to meet our basic human need for a home,” it is still not entirely clear how a continental span populated by over 300 million people, of increasingly divergent heritages, can serve as a distinct home for anybody. It also seems to me that he goes too far out of his way to assure his readers that he is not himself a fascist. It is as if a pro-life activist were to feel obliged to say I am not a misogynist every five minutes. If one frank disclaimer isn’t enough, no number of disclaimers will be.

Yet to dwell too long upon such limitations would be not only ungracious but misleading. In the remote chance that some kind of modus vivendi is ever achieved among the parties in Ukraine – or, for that matter, in these United States – it will be because voices like Reno’s move from the margins to the center. The only way for the West to find a third way, an alternative to catastrophe or dystopia, is through an honest and open discussion of existential questions.

How such a discussion could ever happen in the public square is not clear. For some time now the liberal establishment has taken for granted its right to define who “we” are – and the establishmentarians show no signs of opening up to negotiation on the matter.

Return of the Strong Gods: Nationalism, Populism, and the Future of the West
by R.R. Reno
Regnery/Gateway Editions, 2019
Hardcover, 182 pages