Although all Communist regimes persecuted religion to varying degrees, nowhere did the anti-religious campaign employ such diabolically creative methods of cruelty, and nowhere was it as fatally thorough, as in Albania. Isolated from the rest of the world during the Cold War quite like North Korea today, few outside the western Balkans and the Albanian diaspora know much about the country’s tragic recent history. Hopefully, the shocking memoirs of Dom Simon Jubani, a Catholic priest who spent twenty-six years in Albania’s Communist prison, will serve as a corrective, even if some fragments will make most readers’ skin crawl. 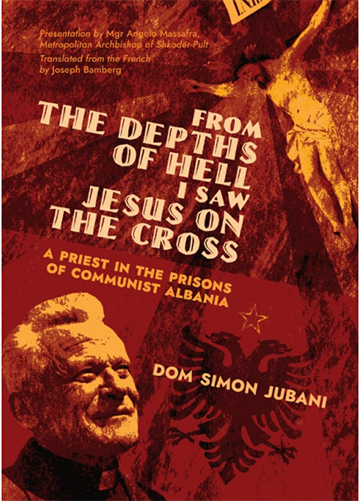 As a historian who deals with Europe’s twentieth century, especially the crimes against humanity perpetrated by the Third Reich as well as the USSR and its Communist satellites, I have read countless unpleasant accounts of human cruelty. However, I can pinpoint the single most disturbing text I have read in my life so far.

In the 2009-2010 academic year, when I was a senior in college, I was reading Robert Royal’s Catholic Martyrs of the Twentieth Century. The chapter I will not forget for the rest of my life is that devoted to Communist Albania. My face grew pale, and I felt nauseous as I read about the torture methods employed against Albanian Jesuits, which included pressing scalding eggs taken directly out of boiling water against their armpits (thus giving them third-degree burns in a highly sensitive place) or slicing open their calf muscles, pouring in salt, and sewing the wounds back together, causing pain that must have been at least as harsh as that experienced during the Crucifixion.

All violations of the Fifth Commandment (which include not only direct killing but also the disrespect of human life) are evil, but such tortures far exceeded any imaginable sadism or psychopathy. Humans have always been cruel, but to be so imaginatively wicked requires something greater than regular iniquity; this must have been demonic in origin. The methods employed by Albania’s Communists remind me of a favorite statement by the late Leszek Kołakowski, who remarked that he could understand how someone can believe in God, but that it was incomprehensible that someone could shrug off the existence of the devil (Kołakowski attributed this phrase to a French philosopher whose name he did not recall).

I do not regret having read Royal’s chapter on Albania. On the contrary, I have since felt compelled to inform the world of Albania’s unadulteratedly evil dictatorship. Just as young people should be educated about the Holocaust, for instance, they should likewise be taught about the cruelty of Communist regimes – and perhaps none matched the cruelty of Albania – if we want to live in a more peaceful world.

That few know about Communist Albania is unsurprising. Not only is this a small, hilly nation of less than three million citizens whose people speak a very unusual language that is related to no other tongues; under Communist rule (1944-1990) it was completely isolated from the rest of the world. Almost no Westerners were able to travel there, while only a small number of foreigners could cross the Albanian border for official business.

From 1944 until his death in 1985, Albania was ruled by Enver Hoxha (pronounced “hod-jah”), a paranoid autocrat who promoted a ridiculously far-reaching cult of personality. After Khrushchev’s thaw in 1956 and the Sino-Soviet split, Hoxha distanced himself from the Soviet Union and sought Mao’s embrace; the Chinese mass murderer, who killed more people than Hitler and Stalin combined, was ideologically more consistent with Hoxhaism than quasi-reformist Soviet leaders.

In 1967, Hoxha declared Albania the world’s first officially atheist state. All religious buildings, including Catholic churches (most of Albania’s population is nominally Muslim, although the country has a Catholic minority of about 10-15 percent concentrated in the north), were shut down. Religious orders including the Jesuits and the Franciscans, who had played a significant role in Albania’s social and cultural life, were banned. In a word, religion was officially illegal.

Dom Simon Jubani (1927-2011) was a Catholic priest from Shkodër who was arrested in 1963 for baptizing children. He spent a total of twenty-six years in Communist prisons, which is recounted in his From the Depths of Hell I Saw Jesus on the Cross: A Priest in the Prisons of Communist Albania. Originally published in Albanian in 2001, this work is now available in English, although this is an indirect translation from French rendering.

The most disturbing chapter in the book is titled “Torture.” The chapter recounts many of the Albanian Communists’ torture techniques performed in prison. To describe just a couple: prisoners’ hands and feet were sawed off (naturally, without any anesthetics), while prisoners would be stripped naked and tied up in a sack with two or three cats, after which the cats would be whacked with a stick and would violently claw and bite the prisoners’ entire bodies in response. Meanwhile, we learn that inmates were sometimes starved so harshly that they ate one another’s vomit.

Reading this, I felt as if I was watching a gruesome film like Pier Paolo Pasolini’s Salò, or the 120 Days of Sodom, except that this was not a fictional account of tortures serving as a leftist director’s commentary on fascism and the abuse of power; this really had happened.

Although you will likely not soon forget Jubani’s depictions of prison tortures, he writes surprisingly little of his twenty-six-year Golgotha. Most of the book consists of Jubani’s story of his vocation and his love of the Eucharist. Dom Simon Jubani celebrated the first public Mass in Albania following the collapse of the Communist regime at a desecrated, dilapidated Catholic cemetery, on November 4, 1990. This Mass was attended by only a couple hundred people, as naturally most Albanians were still terrified of expressing their faith in public, but at Jubani’s next Mass was attended by tens of thousands.

Above all, reading From the Depths of the Hell I Saw Jesus on the Cross filled me with hope. In addition to reading about the unshakeable faith of such heroic priests as Dom Jubani — faith that could not be dented by tortures that exceeded anything that had ever happened in Lubyanka or maybe even Auschwitz — Western readers are offered several useful prefaces and appendices giving context on religion, politics, and history in Albania. We learn, for instance, that after the fall of Communism certain religious orders, especially the Franciscans, are flourishing in Albania, while growing numbers of Muslims are converting to Catholicism.

It is difficult to not be depressed about the West’s current spiritual malaise. Yet for more than a quarter-century in Albania all churches were shut down and priests were sent to extremely cruel torture centers, and the Church not only survived but is in fact doing well in some quarters. If Enver Hoxha’s atheist fanaticism failed to extinguish the faith, then we can be confident that the West’s amnesiac attitude to the two thousand years of Judeo-Christian culture that sustained it will be defeated someday.

While Jubani’s memoir should be required reading for all Catholics (no one ever said that all mandatory reads must be pleasant!), there are a couple of off-putting aspects.

Above all, Dom Simon Jubani appears to be a very bitter man. Love for one’s persecutors is perhaps the most difficult aspect of Christianity. Those who have wronged me in my life have committed tiny peccadillos compared to the inhumanity of Albania’s hangmen, but I often find it difficult to pardon, let alone love them. Yet Pope St. John Paul II forgave the man who nearly killed him, while Blessed Stefan Cardinal Wyszyński, who was recently beatified, prayed every day for the soul of Bolesław Bierut, the leader of Poland’s Stalinist regime who led to his arrest and imprisonment for three years.

I also read Dom Jubani’s memoirs immediately before reading the first volume of Cardinal George Pell’s Prison Journal. Although publicly humiliated as a rapist on the basis of a false accusation later overturned by Australia’s High Court, the cardinal’s writing is free of even the smallest rancor towards his accusers and the media and judicial establishment that brought about his misfortune.

Yet Dom Simon Jubani’s tone is often filled with rage. He writes, for instance, that Enver Hoxha “had a brain tinier than that of a small chicken,” a statement reminiscent of a schoolyard taunt. Again, I would find it extremely difficult to forgive my persecutors under Jubani’s circumstances, yet his harsh attitude often comes across as un-Christian.

Another target of Jubani’s bitterness is, to quote him, “the antichrist that is the United States today.” I found such statements unfair not only as an American, but also because this is a very one-sided accusation. Jubani accuses Roosevelt, for instance, of selling out Albania and other Eastern European countries at Yalta (not an entirely unfair or inaccurate accusation), but then again, another American president, Ronald Reagan, provided generous moral and economic support to dissident movements behind the Iron Curtain.

Meanwhile, Jubani writes of “the communism of the Slavs [that] menaced our lands;” he repeatedly depicts communism as a foreign entity imposed upon Albania by “the Slavs,” specifically by Russia and Yugoslavia.

Again, this is a very unfair generalization. Communism was also violently imposed upon such Slavic nations as Poland, Czechoslovakia, or Bulgaria. Meanwhile, millions of Slavs – Russians, Ukrainians, and others – were murdered by Lenin and Stalin, while in Tito’s Yugoslavia tens of thousands of Southern Slavs suffered harshly in prison camps. Furthermore, while Russia was the first nation to adopt Communism as a political system, were Marx and Engels Slavs? And what about the major contribution of Pope St. John Paul II, a Slav, to the collapse of the post-Yalta division of Europe?

Despite such irritating flaws, From the Depths of Hell I Saw Jesus on the Cross is an important book that should be read by all adult Catholics, not in the least because there are few publications about Hoxha’s regime, let alone about the persecution of the Church there, available in English. It can give us hope about the survival of the Church amidst extreme hardship; nudge us to provide spiritual and material support to persecuted Catholics, which has not ceased after the fall of the Berlin Wall; and help us to learn the remarkable, largely untold story of the Catholic Church in Albania, which perhaps endured the greatest persecution anywhere since the time of Nero and Diocletian yet survived thanks to its members’ faith.

From the Depth of Hell I Saw Jesus on the Cross: A Priest in the Prisons of Communist Albania
by Dom Simon Jubani
Arouca Press, 2021
296 pages