This February will mark nine years since the historic renunciation of Pope Benedict XVI. Joseph Ratzinger would have gone down in history as a great theologian without his rise to the chair of St. Peter, although through his papal ministry he became a teacher of the world. The power of Benedict’s writing speaks for itself, though his life also witnesses to the power of truth and service. 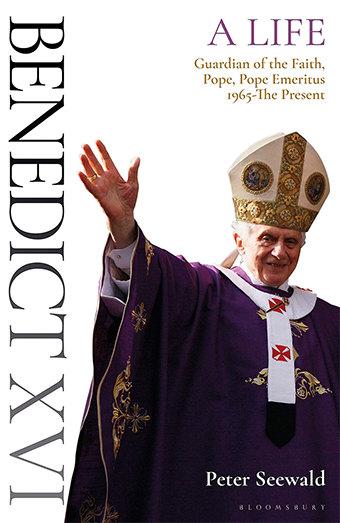 Peter Seewald, who edited many interview books with Ratzinger, before, during, and after his pontificate, has written a thorough biography in two volumes: Benedict XVI: A Life (Bloomsbury Continuum, Vol. 1, 2020; Vol. 2, 2021). With Seewald’s unparalleled access to the pontiff, the strength of his biography comes from bringing Benedict’s personality to the forefront, helping us to get to know the great theologian-pope better, while gaining insight into the providentially guided trajectory of his life.

The first volume traces his early life in the tumult of the interwar period in Germany and the rise of Nazism. I felt much admiration for the Pope’s own father, Joseph Sr., who, as a police officer, resisted the rise of the Nazis and kept his family out of danger for as long as possible, even moving to a remote farm. It was precisely the Second World War that deepened young Joseph’s sense of vocation and his recognition of the urgent need for God, as he witnessed the spiritual and material collapse of his own country.

As a seminarian, he also discovered the great power of theology, particularly in the thought of St. Augustine, that pointed to how the modern world could recover God. Ratzinger sensed his theological vocation in finding a new voice through which he could make the timeless truths of the faith accessible in a new way. It was this mission that led him to the forefront of the Second Vatican Council as the peritus of the centrally important Cardinal Frings. At the culmination of the first volume, Seewald sheds new light on Ratzinger’s influential speechwriting for Frings, which helped set the tone of the proceedings, and his behind the scenes work on the drafts of the Council documents themselves.

The second volume begins, however, with upheaval that followed Vatican II, which necessitated Ratzinger’s break with the progressive school of theology. He helped to found an alternate movement, the Communio school, which would continue to return to the sources of the tradition while speaking to contemporary concerns. Ratzinger, it should be noted, did not suddenly change his thinking; he realized, rather, that many in the Church were too quickly casting aside the Church’s teaching and liturgical tradition and embracing a worldly spirit. His resistance to this self-destruction led to a long campaign of character assassination, seeking to recast the shy and mild-mannered professor as a reactionary grand inquisitor.

This false line seemed to find confirmation with the appointment of Ratzinger as the Archbishop of Munich by Pope Paul VI in 1977, though, in fact, the professor saw this as an enormous sacrifice of service, as he had to abandon his teaching career. He would not stay in Bavaria long as a bishop, as the newly elected John Paul II insisted that Ratzinger come to Rome to serve as Prefect for the Congregation of the Doctrine of the Faith.

After serving tirelessly throughout John Paul II’s pontificate, dealing with issues of Marxism, the relation of the Church to other religions, and the drafting of the Catechism, Pope Benedict XVI was chosen as the most fitting successor to continue the trajectory of the New Evangelization. There is no doubt that Benedict left a great legacy of teaching in his three encyclicals and many speeches throughout the world, although his eight years as Pope were also plagued by ongoing and unfounded attacks on his character and scandals such as Vati-Leaks. His time as Pope has been overshadowed by his historic decision to resign, facing the weakness of advanced old age, which many saw as changing the way we view papacy.

It is difficult to avoid comparing Seewald’s work to George Weigel’s monumental biography of John Paul II, Witness to Hope. Weigel was well positioned to interpret the theological and philosophical thrust of Karol Wojtyła’s life, as well as its intersections with the political and cultural movements of the 20th century. Seewald came to know Ratzinger well and did succeed in capturing his personality, itself a helpful accomplishment. As a journalist, he gives excessive focus to public opinion, and, although he does address the Pope’s major books and speeches, more work needs to be done to capture the depth of his theological vision and spiritual life.

In my own opinion, we will find Pope Benedict XVI’s legacy most fully in his tireless and prophetic witness to the need to put God first in all things, giving him primacy in the liturgy, society, and in our own lives.

About Dr. R. Jared Staudt 49 Articles
R. Jared Staudt PhD, serves as Director of Content for Exodus 90 and as an instructor for the lay division of St. John Vianney Seminary. He is author of How the Eucharist Can Save Civilization (TAN), Restoring Humanity: Essays on the Evangelization of Culture (Divine Providence Press) and The Beer Option (Angelico Press), as well as editor of Renewing Catholic Schools: How to Regain a Catholic Vision in a Secular Age (Catholic Education Press). He and his wife Anne have six children and he is a Benedictine oblate.

From atheism and Marxism to Catholicism: The conversion of Sohrab Ahmari

Sohrab Ahmari, 33, is a New York City journalist and Catholic convert.  He grew up in a nominally Muslim home in Iran under an oppressive Islamic regime and had renounced all religion by his teen […]

Newman and the problems of Catholic intellectual history

Last fall I cheered the impending news of John Henry Newman’s canonization, for which we now have a date: October 13 of this year. October happens to be the month in which, after many years […]