Michael D. O’Brien—iconographer, painter, novelist, critic—is the popular author of many best-selling novels, including Father Elijah, Strangers and Sojourners, Elijah in Jerusalem, The Father’s Tale, Eclipse of the Sun, Sophia House, The Lighthouse, and Island of the World. His novels have been widely reviewed and have been translated into twelve languages. 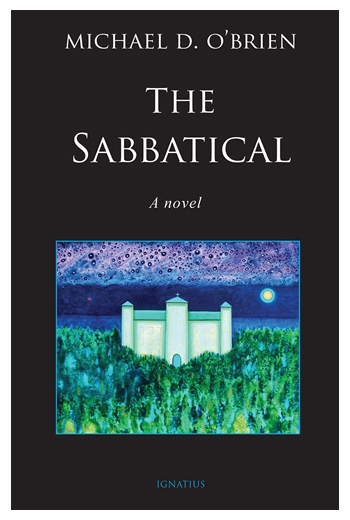 In his new novel, The Sabbatical, O’Brien delves into the plight of modern man amid an ever more hostile secular world. Through the eyes of a humble Oxford professor (whom the reader may remember from previous O’Brien novels), the author explores philosophical, political, and theological concepts in the context of a battle between people who strive to be servants of God and those who would destroy them.

The professor finds himself invited to a mysterious conference where he becomes embroiled in a nation-spanning intrigue that will expose the quiet and pious man to a brutality that he could not have anticipated. During his involvement, he learns a great deal about the world and about himself. He encounters a variety of people who continue to fill him with hope, even when it seems that the Enemy has resources and power that stagger the narrator’s mind.

The Sabbatical is a powerful work that contains many nuggets of truth delivered in a masterful fictional narrative. Throughout the story, the reader is treated to a well-developed cast of characters, and a great variety of thought-provoking dialogues that examine very real and pressing issues.

O’Brien’s classical literary style serves to draw the reader into a scholarly examination of modern philosophical problems while remaining accessible to the lay person. This engaging tale takes the reader on a journey of insightful observations hung artfully across a backdrop of suspense and mystery.

CWR: There is an obvious commentary on the current condition of the world and of mankind. What made you want to explore that topic at this time? Was there any particular reason you decided to address it through this kind of story?

O’Brien: For more than forty years I have been pondering and praying for light regarding the condition of mankind in the modern age. As all manner of evil, including a great deal of psychological mesmerization, continues to spread in the world, I wanted to present a tale about how a man of good will is to make sense of it all.

The story has been about ten years in gestation, and now there appears to be a particular urgency to the questions it raises.

CWR: You chose to tell this story through the eyes of a narrator who is not, for the most part, directly involved in the action, although his experiences afford him the opportunity to glimpse the world of spiritual warfare. What advantages and disadvantages were there for you in writing from this type of perspective?

O’Brien: The central character Owen Whitfield, an elderly professor in Oxford, is not the typical “hero” of contemporary fiction. A kind of Everyman, he is concerned, even very troubled at times, by what he sees emerging all around him. Nevertheless, he feels he has given all that he can to the world, in his own obscure way. All he wants for his sabbatical year from teaching is to enjoy some peace and quiet and his private scholarly pursuits.

However, the narrative drama of the tale parachutes him into the dark hidden core of the battle between good and evil in its multiple manifestations. At first, he thinks he is no more than an impartial observer, and only as events accelerate does he find himself embroiled in a way that he could not possibly have imagined—as an active participant. Clearly, he is a “thinker”, but also a man with a heart and soul, worried about what kind of future his children and grandchildren will face.

Though there is plenty of drama in the story, the disadvantage of its narrative approach—the chaos of the world seen from the “outside”, so to speak—risks losing those readers who are only interested in a thriller, a “good read.” The advantage is that it allows readers a kind of objective assessment of powers and principalities at work in the world without sacrificing identification with the central character.

CWR: Many of the philosophical concepts that are explored in The Sabbatical have to do with free will and the different interpretations of the idea. Were there any particular philosophies that inspired you to delve into the topic?

O’Brien: A strong subtext of the novel is the tension between the concepts of historical determinism, a kind of fatalism or mechanistic view of history, and the authentic Catholic concept of historical providentialism. That is, as history unfolds, God’s grace is always at work, always in dialogue with our gift of human freedom—the “real historical dialectic” Owen calls it.

My main inspiration, I would say, has come from St. Thomas Aquinas’s Summa Theologica, notably Question 83 on freedom and the human will. Of course, decades of reading other philosophers on this question have also helped clarify my thinking on the matter.

CWR: A central character to the story is the young man, Ion. In the eyes of the narrator, he seems to represent hope in the future. Was Ion inspired by a real person in you life?

O’Brien: In part. I see my own grandsons in his character, as well as the numerous valiant young people the Lord is forming in our times. Ion represents the countless young men and women across the globe whom grace and nature, as well as measureless parental sacrifices, are raising up as lights for the future. As the old priest in the novel says of Ion, “Teach him well. Pray for him.”

CWR: Your work in the book is highly reminiscent of C.S. Lewis in its manner of entwining a philosophical theme into a well crafted narrative. Is Lewis a source of inspiration for you? Are there other authors or works that particularly inspire you?

O’Brien: I would say that Tolkien and Dostoevsky have had far greater influence on me. In The Lord of the Rings, for example, Tolkien has created an implicitly Christian mythology that embodies the great war in the heavens that has come down to earth and in which we are all immersed.

By contrast, much of Lewis’s fiction is open allegory. Having said that, I do love his novel Till We have Faces, which is, I believe, his most masterful work, entwining a philosophical theme with narrative and spirituality.

CWR: The narrative in The Sabbatical leaves many questions open regarding the future of the characters. Do you have any plans to continue the story with a sequel in the future?

O’Brien: I have no plans for a sequel. I have deliberately avoided tying up the story and the characters’ lives in a neat package, because, in a sense, they represent our story, which is in process. It sets the context and points to the future. This also avoids the danger of offering readers a simplistic analysis of the massing evils we now face.

The “solution”, so to speak, is not to be found here or there in various templates of analysis. It is to be found where it is always to be found: in the saving power of Jesus Christ, in invoking the Holy Spirit as we face the evils of each day and strive to foster the good each day.

CWR: This story is heavily steeped in the histories and cultures of a handful of European nations, particularly Eastern Europe. Could you elaborate a bit on what your research process looks like and how you prepare to undertake a project that touches so closely on a number of somewhat obscure historical facts?

O’Brien: During the past ten years, my research into various nations, both East and West, has involved deeper reading of history and also numerous interviews and correspondence with people in Romania and England, for example.

There was also considerable attention to facts relating to the dissolution of the old order in Europe, to the remnants of Christendom, to the wars of the twentieth century and how they changed us, politically, socially, and psychologically—and I would say spiritually.

CWR: Is there anything else you’d like the readers to know about the book?

O’Brien: In essence, The Sabbatical is a call to stand firm, and to be open to the surprises the Lord has in store for us. The story—the real story—is not yet over.

About Zander Doby 2 Articles
Zander Doby is an average Catholic and a voracious consumer of literature. He lives in Western Oklahoma with his wife and their four lovely children.

Threats, weaknesses, and the temptation of power

T.M. Doran (tmdoran.com) is the author of several novels, including Toward the Gleam, Terrapin, and Iota. His first novel with Ignatius Press, Toward the Gleam, won acclaim from Tolkien readers across the globe. In it, […]

The morality of tyrannicide is not much discussed in today’s kinder, gentler Catholic Church. Yet that difficult subject once engaged some of Catholicism’s finest minds, including Thomas Aquinas and Francisco Suárez, and it was passionately […]