Sohrab Ahmari emerged onto the American intellectual scene several years ago and is now, only in his mid-30s, an op-ed editor at The New York Post. But as one can tell from his first book, From Fire, By Water, which charted his path toward Catholicism, Ahmari’s grasp and approach to ideas goes far more deeply than what can fit into an op-ed or a tweet (although he is accomplished at both).

Those who might reflexively dismiss his political statements should still find his account of his departure from Iran and his exposure to Western liberalism to be both intriguing and insightful. Ahmari’s life in Iran had given him a bad taste of religious power, so he saw Western secular liberalism as the future and a way out. “As a boy growing up there,” he writes in this new book, “I had already absorbed this judgment [‘God is Great’] and made it my own; I blamed all that ailed my land, its repressiveness and the double-thinking and double-living its engendered, on our hidebound traditions.” 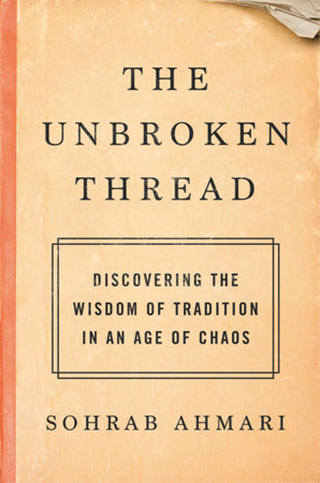 At first, this was what he wanted, and so his morals as a teenager and young man flowed from one to another depending on how he was feeling. But after some time, Ahmari saw it not as the future but as a society living off its own and fast-dissolving religious tradition. And it was religion ultimately that interested Ahmari more than secular liberalism, as the latter falsely appears to be “freedom” but which, he observes, is really a form of spiritually imprisonment. He wanted to understand how secular liberalism became dominant, what was it in comparison to various human traditions, and what elements of that tradition should be protected and defended.

The Unbroken Thread is clearly the result of wide reading and reflection; it puts forth what those traditions are and how they can be defended. Indeed, Ahmari argues that while Catholicism provides the ultimately true vision and understanding of reality, all cultures have connections to the natural law if they exercise the God-given reason and natural virtue inherent to all people. Lessons, therefore, flow from all these cultures; one chapter, for example, on “How must you serve your parents?” draws not only on Shakespeare but Confucius as well.

One strong driver behind this wide search for the reality in human tradition is laid out in the opening chapter, and it is an influence that many Catholic parents will recognize immediately. From the moment our children are born, we sense or see that there is a battle between what the world is telling our child to value and what the teaching of the Church is in contradiction to the world. Ahmari and his wife named their son Maximilian, on behalf of the great Polish priest and saint who was murdered at Auschwitz in 1941.

Naming children after a saint is a common practice for Catholic families who wish to give their children a connection with a person who lived a life for God. Ahmari understands Maximilian Kolbe as representing true freedom. “We have,” he writes, “abandoned Kolbe’s brand of freedom – freedom rooted in self-surrender, sustained by the authority of tradition and religion – in favor of one that glories in the individual will.”

But Ahmari, like us all, began to have concerns over the world’s influence as his son grew. “Yet as I grow into my faith and my role as a father, I tremble over the prospect of my son’s growing up in an order that doesn’t erect any barriers against individual appetites and, if anything, goes out of its way to demolish existing barriers.”

He lives in New York City, a secular city which was, when I grew up there, was filled with many more religious neighborhoods. By the time my kids were young, we moved out. About a decade ago, I wrote “But because, I think, of the combined effect of affluence and the busyness of life in the city, it was no longer a center of the lives of the Catholics who attended Mass there.” Ahmari is worried his toddler son, when he is a young man, will instead be focused on worldly concerns. And that if he follows the Faith any longer, he won’t think it should be taken” too seriously.”

In a penetrating sentence, he imagines the cosmopolitan elite who have variant “spiritual” experiences:

They use mediation apps on their smartphones; they do hot yoga, they find consolation of a kind, in the endorphin rush of long-distance running. These forms of spirituality provide temporary solace from the hectic pace of their lives – without making any absolute moral demands.

This is why such variants are fine in the secular liberal world: they cannot be a threat to that world, because there are no St. Kolbes in such movements. This is why the U.S. Navy, just a few years ago, said it was fine with accepting Jedi Knights as a recognized religion. They are no threat. Catholicism and Christianity, in contrast, do pose a threat because the State does not give us freedom. God does.

In a chapter titled, “Should You Think For Yourself?” Ahmari addresses one of the main questions of the modern age. The modern age tells everyone that they can “think for themselves”, regardless if they really know something or not. But every civilization has a set of religious traditions that embody common spiritual experiences and knowledge. Ahmari invokes St. John Henry Newman, among others, on understanding how we should think for ourselves. Newman teaches that you can only trust your own ideas if you have a well-structured conscience. The modern world instead states, in many ways, that there is nothing really forming your values. But that is a lie bought by people across the political and cultural spectrum. “The old authorities have lost much of their sway … but we … are ‘free minds’ manipulated by commercial and political forces.” Resist them, Ahmari insists, by returning to tradition, to philosophy, and for believers, to God.

The balance of the chapters cover topics such as what freedom is really for, what you owe your body, what is good about death, why God is reasonable, and why God would want you to take a day off. Drawing on the work of Rabbi Abraham Joshua Heschel, Ahmari explains what the divine purpose is of taking a day ooff each week. It is in part to praise and focus on God—but it is also to reject false notions of living, for example, the American practice of endless work. To praise God is why we are here: the Sabbath exists to praise God and workdays are simply how we live to do so. “Traditional civilizations – Jewish, Christian, and Muslim – appreciated the bond between Sabbath restrictions and human freedom.”

This, too, is a challenge to the outside culture, which often equates endless work with being a good citizen, and makes sure our focus is on this work and not the Lord. Since Christian culture has weakened and even dissolved, work on the Sabbath is often expected, and you have to be strong about not working on the Sabbath. One of the points made is that as diverse cultures find their place in American society, perhaps there exists a real chance for traditional and rooted cultures to join together against secularism.

Reflections and remarks about the most important questions of life are divided into twelve separate questions. So, while Ahmari’s arguments are easy to read, copying and sending them to your older children is even easier.

The Unbroken Thread: Discovering the Wisdom of Tradition in an Age of Chaos
By Sohrab Ahmari
Convergent Books, 2021
Hardcover, 320 pages

Can We Turn Back the Clock?

Recently I’ve been complaining about technocratic society. I’ve also emphasized how deeply rooted its problems are. But if I’m right on the latter point, what good does complaining do? Can we really repeal the modern […]

Sanity and the Church

Cultural radicalism rejects tradition, and therefore rejects everything except immediate impressions, abstract ideology, and naked will. That’s no way to build anything solid, let alone […]