“If the Church does not cleanse its own household, God surely will.” 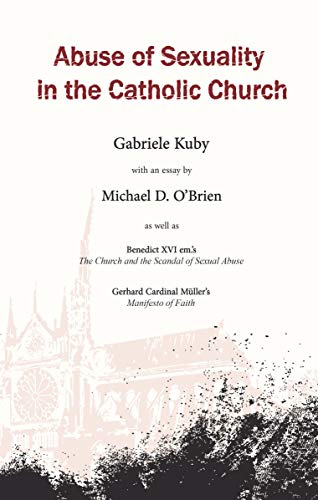 So warns artist and novelist Michael O’Brien whose contribution to this book is searing and poetically concentrated. It gives voice to the unspeakable. His warning likely falls on deaf episcopal ears—at least for the bishops who mistake their vocation for a career.

Before reading this book, I found myself—I am ashamed to admit—thinking I’d read enough about the clergy sex abuse scandal. I had not. But I did read too many of the wrong things. Secular media accounts of the ongoing scandal were not enlightening. Yet I persisted. Why? Because newspaper coverage, blogs, tweets, and interviews demand little. A few passive moments and I felt satisfied that I had confronted the great evil of our age.

I did nothing of the sort.

If we are to face this scandal we must first see it for what it truly is: a diabolical attempt to destroy the Church from within. Too many of our bishops have been blind at best and complicit at worst. They have failed the Great Test. We must look carefully for voices of unflinching integrity. Gabriele Kuby and Michael O’Brien are such guides, and by their lights we begin to see our way in this time of shadow. Each contribute an essay to this slim volume and, along with short pieces by Benedict XVI em. and Gerhard Cardinal Muller, offer serious but hopeful engagement with this most egregious of scandals.

Kuby, a convert, is the author of The Global Sexual Revolution: The Destruction of Freedom in the Name of Freedom (Angelico Press, 2016). As such, she provides a sweeping but profound analysis of the cultural and ecclesiastical developments that got us here. Her short essay goes a long way toward answering the question so many Catholics are still asking: How did it come to this?

Like Benedict XVI em. (whose Passion Week 2019 letter is included in the book), Kuby locates the source of scandal in the Sexual Revolution of the 1960s. This rupture had deep and lasting effects on humanity in general, and the Church in particular. It led, Benedict argues, “to the collapse of the next generation of priests.” And, simultaneously, Catholic moral theology “suffered a collapse that rendered the Church defenseless against these changes in society.” It was, then, an inexorable march to tyranny under the Benedict’s aptly described “dictatorship of relativism.”

Kuby describes the particular manifestation of the Sexual Revolution within the Church, arguing—very persuasively—that there exists a “strong correlation between the percentage of self-described homosexuals in the Catholic priesthood and the incidence of sexual abuse of minors by the clergy.” That said, she does not believe homosexuality is the cause of the sexual abuse of boys but the “precondition.” Of course, we won’t hear this sort of thing from most bishops or from the pulpit on Sundays. But it is no less true. And no less part of a concerted effort. Kuby rightly accuses global elites of adopting the aims of the Sexual Revolution and engaging in a “strategic hollowing out, redefinition, and recreation of words like freedom, tolerance, human rights, diversity, sexual orientation, and gender identity for the establishment of a new anthropology.” It is intended to supplant Christian anthropology and serves an entirely different master.

Michael O’Brien’s essay is largely personal and drawn from his experience with an abusive headmaster at a Catholic boarding school in Canada. It is an infuriating thing to read. The lay headmaster, Martin Houston, was convicted in the early 1960s for molesting boys at Grolier Hall in the Northwest Territories. He spent nine years in prison. But by 1990 he had been ordained a Catholic priest for the Diocese of Saint Boniface in Manitoba. The bishop was very much aware of Houston’s past. Houston’ parishioners were not. A decade or so later, he was exposed as a child molester and resigned.

Houston lived in the diocesan chancery for the rest of his life. He died in 2010. And, in utter disdain for Houston’s victims, Bishop Albert Legatt presided over his funeral at St. Boniface Cathedral. Houston was even given a burial plot in the Cathedral cemetery.

With shepherds like that, we don’t need a virus to clear the pews.

O’Brien, author of the Children of the Last Days series and also a fine artist, rightly criticizes the North American episcopate for reacting rather than responding. “Protocols were tightened up regarding what to do after abuse was reported,” he says, “but there was no widespread effort to do the real surgery…to prevent abuse.” O’Brien has surely put his finger on it. Preventing abuse requires courage, a virtue lacking in a largely invertebrate episcopacy. Stephen White, writing recently in The Catholic Thing, asks a question long on the minds of lay people everywhere:

Why do so many disgraced bishops, having betrayed and lost the trust of the flock, continue to inflict themselves upon us, presuming upon our faith and goodwill, while placing their own ministry and careers ahead of the needs of a suffering flock?

And one that is born of something far deeper than anger. We need our bishops, of course, just as we need all of our religious brothers and sisters who bear more than their share of the Gospel. But we need men and women with gravitas. The age demands it. The people cry out for it.

The last word belongs to O’Brien, who offers a stern but loving rebuke. “Please,” he begs, “no more placebos and band-aids, no more committees tinkering, shuffling, churning out masses of paperwork and staging high-sounding press conferences. No more ‘compassionate’ bombast. No more saying one thing and doing another. Give us decisive action. Clean your house. Protect your flocks.”

Vatican City, Nov 18, 2021 / 12:00 pm (CNA).
The Catholic Church in Italy held its first national day of prayer for victims and survivors of sexual abuse on Thursday.Archbishop Lorenzo Ghizzoni of Ravenna-Cervi… […]

Safeguarding expert: Guidelines are ‘in vain’ if not upheld by Church powers

Rome, Italy, Apr 30, 2021 / 14:00 pm (CNA).
A safeguarding expert said that the Catholic Church could do more to take responsibility for the failures of the past, and to reform power structures which allo… […]