One of the joys of co-hosting the FORMED Book Club with Father Fessio and Vivian Dudro is the opportunity it presents to read and discuss some of the newest books published by Ignatius Press. We have just concluded three weeks of discussion on Russell Shaw’s book, Eight Popes and the Crisis of Modernity, which is an excellent summary of the role of the papacy in confronting the wickedness and tyranny of the twentieth century, the bloodiest thus far in the wearying annals of mankind. 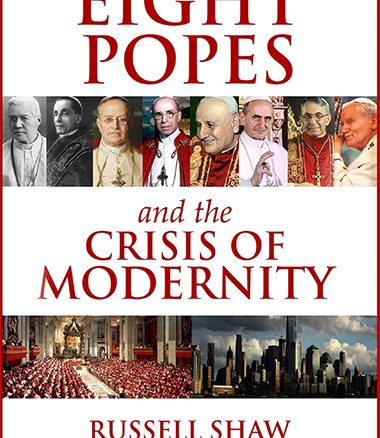 The doom-laden century dawned as the sun was setting on the papacy of Leo XIII (1878-1903), whose encyclical Rerum Novarum had addressed and prophesied many of the ideological demons that would torment the new century. Leo’s groundbreaking encyclical would lay many of the doctrinal foundations upon which subsequent popes would build the body of the Church’s social teaching, a teaching which offers the only hope for political and economic liberty in an age of burgeoning plutocracy and increasing centralization of power.

Leo’s successor was Pius X (1903-1914) whose crusade against the heresy of modernism would hold back the onset of that particular plague for more than half a century. Today, more than a century after his death, his example and teaching still inspire and inform those who continue the fight for truth and tradition against those who would make the Church subject to the meretricious Zeitgeist.

Pius X died as the world descended into the butchery of the first of the bloody century’s two world wars. His successor, Benedict XV (1914-1922), devoted his papacy to restoring peace, not merely by seeking an early end to the war itself but in his efforts to lay the foundations of a sustainable peace in the war’s aftermath. In this noble endeavor, he had a great ally in the Holy Roman Emperor, Karl of Austria. This unity between the spiritual authority of Christendom and its secular equivalent, an all too rare occurrence in European history, could do nothing to prevent the allied powers from imposing an unjust “peace”, which included the removal of Blessed Karl from his throne and his being forced into exile. As for the pope, he was excluded from participation in the peace conference at Versailles. The resulting peace treaty, bereft of the conciliatory wisdom of the pope and the emperor, would be a significant contributory factor in the rise of the Nazis and the consequent second world war.

If the peacemakers, Benedict and Karl, had held sway instead of the warmongers, world history in the past century would have been very different and much less barbaric. It is not merely that the war itself would have ended sooner, saving countless lives, but that an early end to the war would almost certainly have saved the world from the Bolshevik Revolution and the rise of the Soviet Union, and the rise of the Third Reich and the resultant second world war. In this sense, the architects of the extended war and the disastrous peace treaty can be said to have the blood of tens of millions on their hands. Such is the price to be paid for the refusal of the proud to listen to the sanity that sanctity offers.

Pius XI (1922-1939) oversaw the Church’s response to the nightmare scenario that the hawkish architects of Versailles had put in place. In the year in which Pius became pope, Mussolini’s Fascists seized power during the insurrection known as the March on Rome, and Lenin’s Bolsheviks consolidated power after their victory over the anti-communist forces in the Russian Civil War. During the seventeen years of his papacy, the Church suffered persecution at the hands of Marxist regimes in Mexico and Spain, and at the hands of the Nazis in Germany. The world, it seemed, was succumbing to secular fundamentalism of one sort or another.

Pius XI’s response to such darkness was to establish the feast of Christ the King. “When once men recognize,” he wrote, “both in private and public life, that Christ is King, society will at last receive the great blessings of real liberty, well-ordered discipline, peace and harmony.” In 1931, on the fortieth anniversary of the publication of Leo XIII’s Rerum Novarum, Pius XI issued Quadragesimo Anno, which reiterated and affirmed the wisdom of the Church’s social teaching as the only viable alternative to secularist ideologies. In addition, he published powerful rebukes to the godless policies of Fascism, communism and Nazism.

Whereas Pius XI had presided over the Church in the darkening secularist world between the wars, his successor Pius XII (1939-1958) became pope in the year in which the world was plunged into the second of the world wars that secularism had caused. During the war, Pope Pius gave asylum in the Vatican and at Castel Gandolfo to many refugees, including many Jews. After the war, he was a vociferous opponent of the Soviet Empire, which had descended over central and eastern Europe following another disastrous peace treaty.

It would be another fearlessly anti-communist pope, John Paul II (1978-2005), who would have a crucial role in the bringing down of the Soviet Empire. His visit to Poland in 1979, the year after his election, would precipitate a chain of events, a “Domino” effect (pun intended!), which toppled one communist regime after another, culminating in the fall of the Soviet Union itself on Christmas Day 1991. In the same year, John Paul II issued Centesimus Annus to commemorate and celebrate the centenary of Rerum Novarum, reaffirming the Church’s social teaching, the wisdom of which had been ignored by the powers of the world, with calamitous consequences, for the entirety of the period between the two encyclicals.

Looking back on the witness of such holy popes during the decidedly unholy twentieth century, we can be assured that the presence of the Church is that of Christ’s Mystical Body, scourged, crucified and rising again in each generation. As for the secularist enemies of the Church, in this as in the last century, we can take comfort in John Paul II’s conviction that the fall of Soviet communism was largely the reaction against “the spiritual void brought about by atheism”. In the final analysis, the Church does not need the political power to bring down the powers of secularism because secularism has all the power it needs to bring about its own self-destruction. If the last century teaches anything, it is that the culture of death is always committing suicide and that the sanity of sanctity is always the seed of life.

Plumbing the depths of a dozen works of classic literature

The rich literary patrimony of Western civilization can be daunting. Where to begin? Which books are truly great? Which works of literature have stood the test of time? Joseph Pearce’s most recent book is titled […]

Thanksgiving with the Saints