Creating a children’s book about forgiveness and redemption is not an easy task. And illustrating a children’s picture book with images of the crucifixion and the promise of eternal salvation is even harder. But bestselling author and broadcaster Raymond Arroyo, along with illustrator Randy Gallegos, demonstrates he up to the task with the delightful The Thief Who Stole Heaven: A Legend. 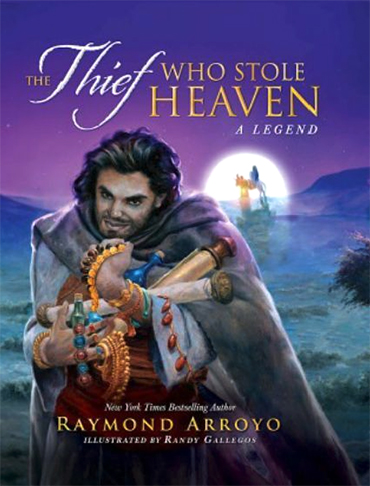 The beautifully illustrated book tells the story of the “good thief” who was crucified next to Jesus on Calvary.  In the Gospel of Luke, we are told that this “good thief” tearfully repents of his evil deeds and is promised salvation by Jesus when he tells the once-evil man: “Truly I tell you, this day you will be with me in Paradise” (Lk 23:43). And although the name of that thief, Dismas, is not identified in the New Testament, it emerges later in later non-canonical writings, as well in the works of some saints.  In a postscript, Arroyo explains that he used these historical writings—texts that created for him a “trail of legends and rich insights into the character of the good thief”—to tell his version of the story of the Thief Who Stole Heaven.

Arroyo’s prose is reassuring and hopeful, and the illustrations are not graphic; rather, are quite beautiful and engaging even for young children. The lighting on each of the pages is strategic, indicating the bright hope of salvation. And although children are introduced to the concepts of good and evil on some of the early pages of the story, it is done gently and with great respect for the innocent child.  Images of the crucified Christ are presented, but they are softened enough so that even our littlest Christians can begin to learn that although there is evil in the world, it can always be conquered through God’s love and forgiveness.

In some ways, Arroyo has given us the gift of a legend that works almost like a fairy tale.  It is the kind of fairy tale that is based on the very real biblical and historical version of the repentant thief.  For the child—and the adult who knows there is still a child in all of us—all fairy tales reveal truths about ourselves and the world.  Recognizing and avoiding evil is an important part of this truth.

As psychologist Bruno Bettelheim writes in his 1976 book The Uses of Enchantment, “the fantastical, sometimes cruel, but always deeply significant narrative strands of the classic fairy tales can aid in the greatest human task, that of finding meaning for one’s life.” Children who are familiar with fairy tales understand that these stories speak to them in the language of symbols—not the reality of ordinary life.  Children know that the fairy tales may not be quite “real”, yet the real events in their lives become important through the symbolic meaning that is attached to such tales.

Children also understand that the events described in these stories happened “once upon a time,” in a world far from here. The old castles, the magical fairies, and the enchanted forests housing magical birds and friendly animals existed in a unique fairy-tale time—a time described in the opening lines of the Brothers Grimm’s “Frog King” as a time that was long, long ago, “when wishing still helped.”

These stories are still important today.  In fact, they are probably more important than ever as we try to find meaning in our increasingly bereft lives.  Increasing numbers of children are no longer raised within a loving community in which the church provides a source of meaning.  Fairy tales speak directly to the child at a time when the child’s major challenge is to bring some order to the inner chaos of his or her mind.  As I write in my newest book The Politics of Envy (Crisis Publications, 2020), fairy tales can help children understand their own sibling rivalries—their own envy toward their brothers or sisters—a necessary condition for achieving some congruence between their perceptions and the external world.  Confirming their inner experiences and thoughts about their envious feelings, fairy tales about envy, and about overcoming envy, help children feel validated in their ability to overcome these negative emotions. In this way, fairy tales are “fully moral” because the listener of the fairy tale understands that true happiness and peace rely upon certain moral precepts or conditions. When these are broken, there can be neither peace nor happiness.

As one writer has stated, in reflecting on G.K. Chesterton’s insights into fairy tales: “The condition may vary according to the tale, but the tales mimic the great understanding of Genesis when it declares that God Himself predicated all future happiness on one and only one condition: from all other trees though may eat, but from this one though may not.”  When Eve defied the condition, death entered the world. The best fairy tales—like all the best stories—”document the moral imperative that there exists a condition, and that if the condition is broken, then all hell may well break loose.”

In Orthodoxy, Chesterton wrote: “My first and last philosophy, that which I believe in with unbroken certainty, I learned in the nursery…The things I believed most in then, the things I believe most now, are the things called fairy tales.” Chesterton was speaking of the morality of fairy tales and writes: “There is the lesson of ‘Cinderella,’ which is the same as that of the Magnificat, exaltivit humiles, He lifted up the humble…There is the great lesson of ‘Beauty and the Beast’ that a thing must be loved before it is lovable.”

When Chesterton said that fairy tales are “entirely reasonable things,” he was speaking of them as experiences, as “mirrors of inner experience, not of reality; and it is as such that the child understands them.”  The message of the fairy tale operates in the unconscious, offering children solutions to problems they cannot even acknowledge to themselves.  The best ones—including the classic ones by the Brothers Grimm or Hans Christian Anderson—address the existential predicament.

In The Uses of Enchantment, Bettleheim suggests that the fairy tale reassures, gives hope for the future and holds out the promise of a happy ending for the good, the true, and the beautiful.  That is why Lewis Carroll called the fairy tale a “love gift” to a child.  The classic fairy tale gave the child an intuitive, subconscious understanding of his own nature and of what his future may hold if he is able to control his envy, and his willfulness, and develop his positive potential.  The child senses from fairy tales that to be a human being in this world means having to accept difficult challenges, but also encountering wondrous adventures and triumphing over adversity. As Chesterton suggests, children already know there are dragons (and evil) in this world.

The task of tales, such as Arroyo’s new book, is to help children realize that the dragons (and the evil temptations) in our lives can be conquered through God’s grace—and that even the evil thief can truly repent and be assured of God’s love and promise of salvation.

About Anne Hendershott 100 Articles
Anne Hendershott is Professor of Sociology and Director of the Veritas Center for Ethics in Public Life at Franciscan University in Steubenville, Ohio.  She is the author of The Politics of Envy (Sophia Books, 2020)

“To be a part of kids’ imaginative world is a gift”

Catholic readers most likely recognize Raymond Arroyo from his work on EWTN, in particular his weekly show The World Over with Raymond Arroyo. He is a regular Fox News contributor, has written for numerous outlets, […]

Beautiful Catholic picture books for your children or godchildren

When my youngest brother was born, the hospital signed him up for Dolly Parton’s Imagination Library, a program in which children receive free books in the mail from birth until age five. This is a […]