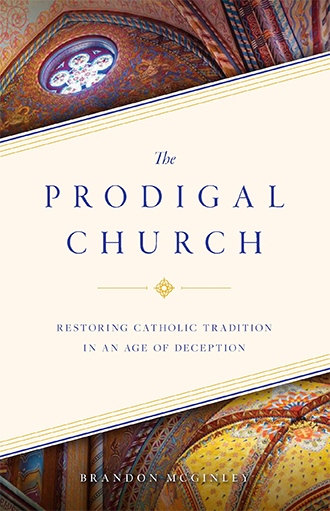 Brandon McGinley has written a book, The Prodigal Church (Sophia Institute Press, 2020), which analyzes what has happened within and to the Catholic Church in recent decades, and how the Church can best respond to the dominant culture. The publisher describes the book as a “roadmap to renewal,” as McGinley provides a thoughtful and in-depth diagnosis of the issues the Church faces today and a prescription for how to meet those challenges.

McGinley recently spoke with Catholic World Report about his new book, and the role the Church should play in meeting the challenges of our culture today.

Brandon McGinley: The ideas in The Prodigal Church had been percolating in my mind for years, but they came out piecemeal: an essay here, a tweet there. Writing the book gave me a chance to organize those thoughts into a coherent whole, focused on a renewed appreciation for the deep reality of what the Church is. That’s something I kept coming back to in my writing: We have everything we need to renew the Church and the world, but we just don’t recognize it because we’ve been so well-catechized by secularism.

At the time these ideas were coming together, I was the editor for EWTN Publishing, which is a collaboration between the network and Sophia Institute Press. I had long dreamed of being completely independent, though, and both EWTN and Sophia were very supportive. I pitched the book to the team at Sophia as my term as editor came to a close, and it anchored my first year as a freelancer.

McGinley: I always hasten to say, when answering this question, that the title is meant to evoke the entirety of the parable of the Prodigal Son—not just the (very negative) meaning of the word “prodigal.” Like most people, when I think of the parable, I don’t think about the pigsty; I think about the reconciliation. And so the title is meant to evoke both the struggles of the Church today—a dissipated inheritance, like the Prodigal Son’s, that has left us feeling defenseless against secular modernity—and the constant possibility of restoration and reconciliation. Our birthright of grace and peace can be restored by the Lord if only we trust that He can do it and return to Him—as individuals, families, parishes, and the Universal Church.

McGinley: That’s a very good question. It really resolves into: How far along in the collapse of secular liberalism are we? From the pandemic to politics, it seems like everything is accelerating, so part of me wants to say that we are near “the end,” and the Church better pivot right away to thinking about and bringing into being a new order to replace the one that’s passing away. On the other hand, liberal civilization has proved quite durable, and may still have several generations left in it. That seems to me to be a harder case to make, and it’s hard to see how it hurts for the Church to be on the front lines of considering “what’s next.”

CWR: We are living in a world where the culture no longer sustains the faith without us having to think much about it. How do you think this will affect the Church in the near future? How about the long term?

McGinley: In the short term this is a disaster for the Church, as has been proven over the past several decades. At her best the Church passes down the Faith—through families and with the support of culture—almost like DNA. What happened in the middle part of the last century is that all the cultural supports for that process evaporated, but the institutional Church and Catholic families acted like they were still there. Now we’re finally coming to grips with reality—which means we have the chance to turn this liability into an asset. While it’s never ideal for the Church to be a “voluntary association,” it does select for zeal: Almost all adults Catholics of my generation are, by some definition, converts or reverts. The task before us now is to harness this new density of passion, and to try to build again the kind of (sub)cultures that will allow it to propagate itself, rather than dissipate once again.

CWR: How would you respond to those who talk of a smaller, “purer” Church?

McGinley: As I discuss in the Introduction, then-Fr. Ratzinger’s 1969 radio address—the genesis of the “smaller and purer” trope—predicting a “smaller and more spiritual” Church. And he didn’t necessarily recommend this notion; he just said it was coming, at least in the West, whether we liked it or not. Who could say he was wrong? It’s really up to us whether a smaller and “more spiritual” Church is purer or not. It could be! The Church could be more nimble, more confident, more evangelical: Shorn of many of her institutions, she could boldly reclaim her traditions while speaking fearlessly and prophetically to the world. Or this Church could be self-obsessed, whiny, and revanchist, trying to restore a recent past whose foundations have long since been washed away.

CWR: You do not idealize the past, some sort of pristine pre-conciliar flourishing Church. You recognize that some things worked, and some didn’t. How do we identify what worked, and what can work today in helping to renew the Church?

McGinley: I tend to think of it in terms of what is applicable across time and space, and what was contingent on particular circumstances. For instance, the old teeming urban Catholic enclaves are gone forever. The political power of the Church as an actor within the liberal order isn’t coming back. And so on. But at the same time, we can say that tight-knit networks of families have been essential to the Church’s flourishing through time, and then try to figure out what that looks like in the circumstances of our society and each family. We can say that a confident sacramentality in parish life sustains communities, and then discern how that works in a new, shrinking spiritual geography. And so on.

CWR: Since the time this book came out, this nation elected its second Catholic president—a man whose policies are quite often directly at odds with the Church whose creed he professes. How does this affect efforts for authentic renewal of the Church in this country?

McGinley: I suspect President Biden will be seen as the second bookend for the heyday of what I have called “accommodationist Catholicism” that opened with John Kennedy (whom I criticize rather severely in the book). His brand of Catholic identity, where everything but the Creed is negotiable with prevailing trends in American liberalism, has failed spectacularly to propagate to successive generations. He will be deployed by secularists and liberal Catholics to needle Catholics who actually believe what the Church teaches about the dignity of life and sexuality and so on, and that will be extremely annoying, but I really don’t think it will change many minds. Joe-Biden Catholicism is a zombie theology: This presidency will give it the appearance of vitality for a few years, but certainly to the vast majority of young Mass-going Catholics, it doesn’t look like (because it isn’t) a live option.

McGinley: It’s so easy to fall into despair over the state of the world and the Church today: We see it every day online, especially, with rage and contempt and detraction passing for passionate faithfulness. But the virtues are part of the truth, and a bare fact that is delivered with meanness or impiety actually fails to communicate the truth in its fullness. As we’re thinking about renewing the Church, the first word across our lips (other than “Jesus”) must be “grace,” followed by “love.” Unless we are cooperating with (and therefore communicating) grace by acting with charity, we will be the “clanging cymbals” Paul warned about in 1 Corinthians 13. If we are to see real renewal in our time, it will be through a meek and humble reliance on God to bring about the restoration—like that of the Prodigal Son—that His power alone can effect.

About Paul Senz 87 Articles
Paul Senz recently graduated from the University of Portland with his Master of Arts in Pastoral Ministry. He lives in Oregon with his family.