Helen Andrews is an Eastern Orthodox writer who serves as senior editor at The American Conservative and author of the new book Boomers: The Men and Women Who Promised Freedom and Delivered Disaster (January 2021). Holding a B.A. in religious studies from Yale University, she previously served as managing editor of the Washington Examiner magazine, as an associate editor at National Review, and as a Robert Novak Journalism Fellow in 2017-2018. From 2012 to 2017, she lived in Sydney, Australia, working as a think tank researcher for the Centre for Independent Studies. 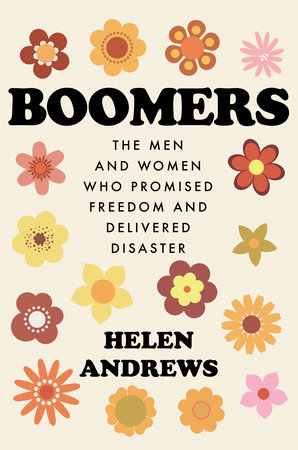 I recently interviewed Mrs. Andrews by phone about her new book. The following transcript of our interview has been edited for style and length.

CWR: Let’s begin with the positive. In one sentence, what do you value about the legacy of American Baby Boomers?

Helen Andrews: I don’t even need a complete sentence: the music. That’s really about it.

CWR: Any music in particular?

Helen Andrews: The folk revival; the thing I hate most about the Boomers is their destruction of both high culture and folk culture, but they did revive folk music in a way that was of service to America.

CWR: Pew identifies Boomers as people born between 1946 and 1964. In one sentence, what do you believe to be the worst aspect of the Boomer legacy?

Helen Andrews: The Boomers were institution destroyers; they saw institution as constraining individual choice, which they do, but consequently they crashed through institutions like a wrecking ball.

CWR: Your book critiques six famous American Boomers. By what criteria did you pick these six?

CWR: What are the best and worst things we inherit from Steve Jobs?

Helen Andrews: The best thing is beautiful products; he was a capitalist of genius. The worst thing is our addiction to those products; screens enslave people in a way previous forms of communication simply do not.

CWR: I was surprised you included Aaron Sorkin, whose “West Wing” seems today an overrated and forgotten television show for many people, albeit one that catered deftly to the vanity of future politicians twenty years ago. What do you see as Sorkin’s legacy for our current political culture?

Helen Andrews: It may be forgotten by the rest of the country, but “The West Wing” is a very well-remembered show here in Washington, D.C., and the people of a certain age staffing the federal government from the Biden White House on down went into politics because of “The West Wing”—and they still see “The West Wing” as a guide to how policy should be. So that’s an enormous legacy for what was at the end of the day a Wednesday night, one-hour primetime drama.

Helen Andrews: Jeffrey Sachs, like a lot of great men, was born with enormous gifts and used them to good effect, but was then overtaken by hubris. He is a man who has claimed that if we only listen to him, we can eradicate extreme poverty. Not alleviate—eliminate—and that’s contradicting a higher authority than the Harvard economics department to say we need not always have the poor with us.

CWR: Camille Paglia, a once-trendy gender theorist who identified herself to me an interview as a “Catholic pagan,” gets some of the harshest treatment in your book for her influence on rape culture. Why do people of your own Millennial generation, some of whom have tried to have Paglia fired from her teaching job, react with particular vehemence to her?

Helen Andrews: She is a polarizing figure; that’s one of the things I love about her. She’s clearly brilliant and, in an age when most academics are mealy-mouthed, hedging mediocrities, she dares to say what she thinks. So I don’t think she’d be at all offended by my strong reaction, positive and negative, to her work and her public persona. I think she would see that as evidence that she’s doing something right.

CWR: In one sentence, what do you hope readers will take away from your Al Sharpton chapter?

Helen Andrews: That as repulsive as he may be personally, Al Sharpton is doing something that needs doing, fulfilling a function that any multicultural society needs someone to do—and if we think he’s doing it in a scoundrelly way, we should replace him and his message with something better rather than just rail against his questionable methods.

Helen Andrews: She wants to be the people’s justice and to bring her life experience to the Supreme Court, which is fine and maybe even laudable. But the most important thing about her life experience as a “wise Latina” seems to be, in her opinion, all the ways she’s a victim. I don’t think victimhood is something that should be put at the center of someone’s personality and judging. It’s not healthy and it’s not very Catholic.

CWR: You conclude your book with a chapter noting how Millennials have ironically begun to repeat the mistakes of the Boomers. What do you believe to be the most egregious of these mistakes that you see Millennials repeating?

Helen Andrews: That it’s cool to burn stuff down! Millennials had Boomers not just as their parents, but as their teachers, and we were taught that the 1960s were the pinnacle of American politics. Nothing is higher or greater than to take it to the streets or stick it to the man. Maybe they could get away with it back then, when society was more stable, but I think America is a lot less stable now, due in large part to six decades of Boomer rule. So acting out in 1960s fashion today, as we saw in the summer of 2020, is going to be a lot more dangerous and have more consequences this time around.

Helen Andrews: That the Boomers will finally make a graceful exit, having clung to power for so long, and realize that it’s time for younger generations to have their day in the sun and for the country to move on from the Boomers and their preoccupation.

Helen Andrews: This is not a Boomer-hating book. My hope for it is not just that it will help Millennials understand how we got here, but also help Boomers understand why the rest of us are so angry with them. I just want for the generations to understand each other better.

About Sean Salai 11 Articles
Dr. Sean M. Salai, D.Min, is the culture reporter for The Washington Times. A former Jesuit, he holds a doctorate in evangelization and digital media from The Catholic University of America and is an author of multiple books on Ignatian spirituality.

Diversity is not a cult—but what is it?

A couple of months ago I was savaged on my campus on account of a title supplied by one of my editors: “My College Succumbed to the Totalitarian Diversity Cult.” I don’t know that Providence […]

You Better Watch Out—St. Nicholas is Coming to Town

The seldom-told stories of St. Nicholas the Wonderworker. […]

The Catholic artist and the challenge of evangelizing modern culture

Rhonda Franklin Ortiz, in her illuminating CWR essay “Popular fiction and the Catholic Literary Renaissance” (April 25, 2021), describes how well-crafted popular/genre fiction can be a worthy endeavor for Catholic authors and worthy reads for […]