Christian writers have become adept at passing judgment on modernity and tracing its historical development through the development of liberalism. They typically note how late medieval nominalists, Protestant reformers, philosophers such as Descartes, the Enlightenment thinkers, and then nineteenth-century idealists each further corroded Christendom and bestowed on us today’s modern world. Modernity as Apocalypse doesn’t challenge any of this, but makes an insightful contribution by focusing on the spiritual and psychological aspects of the modern age. Author Thaddeus Kozinski deems liberalism-based modernity as not merely a historical period, but a certain frame of mind, a “social imaginary”. The author identifies idolatry as modernity’s core sin because it has removed God from the center of culture. 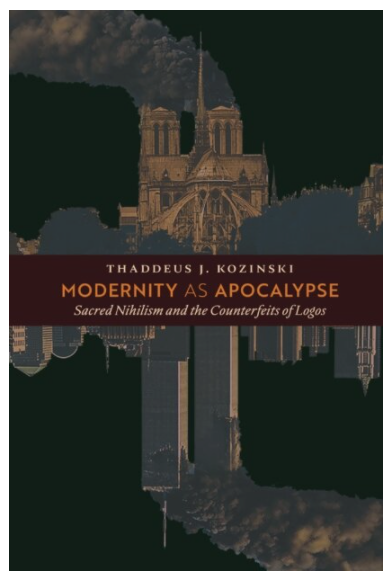 The book’s first of five parts focuses on the history and nature of modernity. Kozinski borrows much from Charles Taylor, who defines modernity by its “immanent frame,” that is, a worldview that excludes the transcendent. Kozinski also cites Michael Gillespie, who sees modernity as trying to aggressively establish a new metaphysics and theology. Throughout the book, Kozinski shows how modernity clearly achieves this unique metaphysical and religious orientation through recognizing and bowing down before a satanic sacred. It is notable that the author associates “sacred” with “satanic”: Christians must understand that modernity, despite its own claims to religious neutrality, has simply turned in on itself by establishing its own ideals as sacred.

Part two, “Logos,” provides the counter to modernity. Though the concept of logos will be familiar to most, readers would have benefited from a clear and concise definition. The author does show how logos can give us the hope that we can escape modernity’s ethical and spiritual straitjacket. We must put logos at the center of culture and education because the limits to our God-given nature prevent the freedom to create our own telos. We are obliged to be the “purpose-fulfilling creatures” of God’s making. A logos-centered vision leads to authentic happiness which differs from the shallow happiness peddled by secular society. Authentic happiness is infused with meaning and comes from a religiously-oriented life: “In short, we are obliged to be happy because we have a duty to love the gift of a divinely-bestowed, happy-making existence, and we are encouraged to desire happiness for its own sake” as a way of expressing gratitude for the eternal happiness that is a gift to us.

Kozinski argues for the integration of Plato’s good and Aristotle’s ethics-based happiness with Christianity. In other words, he seeks a synthesis of Augustine and Thomas. The pre-Christian doctors of the soul, Plato and Aristotle, provided a solid foundation for human behavior and anthropology. Kozinski’s describes the beauty of Plato’s vision and highlights the Athenian philosopher’s fusion of the spiritual with the psychological:

Before grace can divinize the soul, the soul must yearn for divinization. What makes us so yearn? A sense of the inadequacy and shadow-like nature of this world, an intense feeling of alienation and homesickness, a profound intuition that there is much more to reality than what ordinarily appears to us.

Kozinski discusses the real value and vital role of the humanities for the Church. The humanities reach far beyond developing reasoning. They help to order human behavior. Kozinski refers to the famous French philosopher, Pierre Hadot, who argued compellingly that ancient Greek philosophy was spiritual direction. Readers might have benefited more from a longer analysis of Hadot, particularly why he judged the ancient Greek cure of the soul as superior to Christianity’s cura animarum.

Kozinski’s argument shows that modernity has not only rejected Christendom and the Church. It has also rejected the understanding of the humanities as the search for the truth which pertains both to this world and to metaphysics and the human soul. The humanities’ ordered perspective on the material world grounds us in reality while opening us to transcendence. While this argument is already rich and convincing, references to Christian spiritual writers with roots in both ancient philosophy and Christianity, such as Clement of Alexandria or Bonaventure, would have rounded out the argument.

Part three, “Metanoia,” provides the basics of tradition for Catholic educators. Much of education should be useless, which is to say, its own end. This leads to the argument that happiness doesn’t come from the instrumental or the utilitarian: “happiness is the most useless thing since it is never a means, but always an end.” The practical training that we need as embodied creatures should not come at the expense of the heart of education, which universities should still maintain.

Chapter 9, titled “Catholic Education and the Cult of Theistic Evolution,” argues for Thomism as a treatment for “nominalist, scientistic, materialist, and fideist rationalities” despite the unwelcoming atmosphere such a philosophy would receive nowadays. Kozinski admits as much, observing that today’s philosopher needs “metaphysical courage”. This hits close to home for any reader who has attended university or knows the struggles of Anthony Esolen or Roger Scruton against the liberal academy.

Though Modernity as Apocalypse sketches out some very demanding philosophical issues, the author is not guilty of abstracting from the present. We get a very clear view of modernity’s spiritual battle with Christianity and the humanities as they have been traditionally passed on. Plato, Aristotle, Thomas Aquinas, and the keen understanding of “The Satanic Sacred”, the title of one of the later chapters, provides practical wisdom.

Chapter nine’s robust rejection of Darwinian evolution, specifically macro-evolution (while accepting the concept of micro-evolution), alerts us to the idolatries that Christians fall into when we go along with the zeitgeist. Following chapters clarify how idolatry is inherent to modernity’s antichristian tradition. Unsurprisingly, this has ramifications for education. The author ably depicts modernity’s educational failures, which stem from the lack of traditional Christian metaphysics rooted in ancient Greek philosophy. The author refers to Alistair MacIntyre’s convincing observation of liberalism’s dissolving nature and the ensuing effects on education. This dissolution, according to Kozinski, leads to both deep confusion and dishonest liberal ideologies. As at many other points in the book, such observations echo the observations and frustrations of many of us.

Part four (“Keep Yourself from Idols”) argues that since modernity has made its own sacred space, Christians risk worshiping false gods by adopting its values. This includes the current notion of freedom. This notion shares nothing with the traditional view of freedom. Post-traditional society has been misrepresenting values and virtues by cultivating its own theology and sacred practices. Kozinski cites James Kalb’s observation of the roots to this ideological dishonesty: “To refuse to talk about the transcendent, and view it as wholly out of our reach, seems very cautious and humble. In practice, however, it puts our own thoughts and desires at the center of things, and so puts man in the place of God.” In other words, all is not what it seems with modernity’s claims about religion. Perhaps disturbing for some readers, Kozinski criticizes contemporary conservative Christianity in America for absorbing too many secular idols, particularly the worship of state power, which is often military in nature.

Part five, “Apocalypse,” doesn’t promise readers a happy ending in this world, though Kozinski explains how we as Christians are called to understand and relate to an antichristian society. It is here that the author most fully develops his insightful observations about the new sacred, satanic order. He links modernity back to the first rebel: “The essence of the Luciferian program is to seduce human beings into believing that their salvation lies in experiencing and acting upon the ‘freedom of absolute autonomy’ that Lucifer inaugurated when he rebelled against God.” While Kozinski argues throughout the book that the Church must be allowed its proper sphere in any society, and that Christians cannot compromise with modernity, these ending chapters most forcefully link modernity to evil. Modernity fails to build a society of love because it fails to value love. This leads to the “worship of nothingness”, to spiritual and metaphysical nihilism. We flee God, love, and metaphysical reality through our abstract creations.

Modernity has built a unique and powerful version of Plato’s cave in which modern humans take shadows for reality. The cure is the Church, as only she can show us the true nature of these shadows — literally nothing. The author’s assertive ecclesiology, the robust position that he calls the Church to take in society, is refreshing and hopeful. Yet readers may be unsettled by what the author declares to be shadows, which include the belief in freedom, empty desire, empty belief, or “belief in belief”. Such logic leaves readers with little choice but either to reject modernity, however terrible this choice may seem, or to reject Kozinski’s argument.

The book ends by turning to Rene Girard’s prophetic vision. His groundbreaking scapegoating theory led to prescient observations, including the following cited by Kozinski: “You can foresee the shape of what the Antichrist is going to be in the future: a super victimary machine that will keep on sacrificing in the name of the victim.” The striking relevance of Girard’s words reflects the striking relevance of Modernity as Apocalypse, especially the final chapters ,which argue successfully that politics is not downwind of culture. It is downwind of the culture that is produced by religion. This religion, at present, promotes the satanic sacred. Kozinski weaves into his own argument Girard’s assertion that only Christianity breaks the scapegoating cycle, which we see in Peter’s ability to snap out of his betrayal against Jesus when the cock crowed the third time.

Overall, Modernity as Apocalypse offers a considerable analysis of the spiritual problem at the heart of modernity while suggesting the logos-centered life of virtue as the answer. Later chapters may be painful reading to conservative Christians who, the author contends, have often been guilty of their own form of modernity-induced political correctness. Yet Modernity as Apocalypse provides a tonic to idolatry and the ensuing frustration that many Christians feel. This leaves readers with the hope that we can start by changing ourselves and our own perceptions which seem to be unduly influenced by modernity’s sick idols and values.

Ten Catholic scientists and inventors everyone should know

July 22nd marks the two-hundredth anniversary of the birth of Gregor Mendel, the Austrian Augustinian friar known as the father of genetics. While the dominant narrative in the West since the Enlightenment has been that […]

Natural No Maas: The disintegration of the concept of all law in Luther

Classical Protestantism is a voluntarist form of Christianity, such a radically different view of human and divine will that it must be differentiated from non-voluntarist […]