For a nineteenth-century Anglican minister, John Henry Newman harbored a surprising level of devotion to the Blessed Virgin Mary. 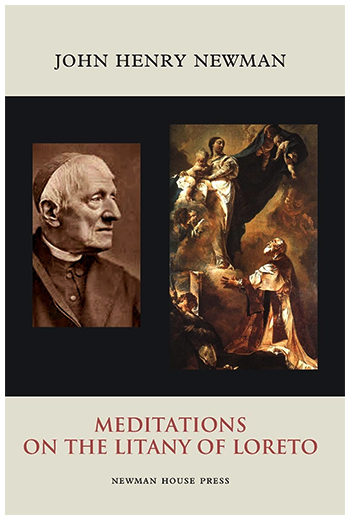 He dedicated an 1832 sermon, for instance, to instructing his congregation on the reverence that is due to the Mother of our Lord.i He also drew close to affirming the doctrine of the Immaculate Conception, describing Christ as “the immaculate ‘seed of the woman,’” and asserting that the Son of God did indeed participate in our nature, but did so by “selecting and purifying unto Himself a tabernacle” from among women.ii

Upon becoming Catholic (in 1845), Newman’s Marian devotion naturally intensified, though he always kept in view that the glories of Mary are for the sake of her Son—to paraphrase the title of one of his Catholic homilies. Newman’s profound theology of Mary is, in fact, one of the key theological threads that runs through both his Anglican and Catholic works. For good reason, Fr. Nicholas Gregoris has noted that “the whole of [Newman’s] life and thought was imbued with his knowledge and love of the Blessed Virgin Mary, so much so that to understand Newman is to understand his Mariology.”iii

The attractive new edition of Newman’s Meditations on the Litany of Loreto (Newman House Press, 2019), then, is an excellent place to start for anyone seeking to understand Newman through an engagement with this great saint’s Mariology. Newman penned these meditations as a devotional guide to be used throughout the month of May, a month that Catholics have traditionally dedicated to honoring our Lady.

What sets this printing apart from previous editions is that it incorporates beautiful “etchings by a relatively unknown Italian artist—Ezio Anichini—depicting the titles of Our Lady as found in the Litany of Loreto”. In 2019, when the Priestly Society of John Henry Newman was looking for a way to commemorate Newman’s canonization, one of its members—Fr. Peter Stravinskas—learned of the existence of these etchings housed in the Marian Library at the University of Dayton, and requested permission to use them in a new edition of Newman’s meditations. The end result is splendid. Anichini’s exquisite etchings serve as a wonderful complement to the meditations, providing an aesthetically striking visual backdrop for Newman’s panegyrics to the Mother of God.

Fr. Gregoris was tasked with writing the foreword to the volume. In this introductory section, he provides a brief but informative overview of Newman’s life, helpfully demonstrating how it was Newman’s close study of the Fathers of the Church that inspired and guided his love for our Lady. Whenever I encounter Protestants who feel drawn to Catholicism but are still unsure about Marian doctrines and devotion, I point them to Newman. Because he was steeped in patristic theology, he formed the habits of reading Sacred Scripture as the early Church Fathers did. This characteristic of his theology is particularly evident in Newman’s Mariology. Given their strong patristic tenor, his writings on Mary can help inquiring Protestants to see the way in which later Catholic affirmations about the Mother of God are authentic developments of the theological heritage passed down to us from the first centuries of Christian history.

Also in the foreword, Gregoris rightfully points out that, Newman’s “‘Meditations on the Litany of Loreto’ stand out [as] among his most heartfelt and devotional Marian works” (17). In the meditation for May 7—on Mary as the Mater Amabilis, the Lovable or Dear Mother—one gets a sense of just how heartfelt Newman’s devotion to our Lady truly was:

There was a divine music in all [Mary] said and did—in her mien, her air, her deportment, that charmed every true heart that came near her. Her innocence, her humility and modesty, her simplicity, sincerity, and truthfulness, her unselfishness, her unaffected interest in everyone who came to her, her purity—it was these qualities which made her so lovable; and were we to see her now, neither our first thought nor our second thought would be, what she could do for us with her Son (though she can do so much), but our first thought would be, “Oh, how beautiful!” and our second thought would be, “Oh, what ugly hateful creatures are we!”

For Newman, such reflections are not fanciful speculations based off some inchoate assumption that Mary must have been great; rather, they are integrally rooted in what we know about our Lady from Catholic doctrine. In the meditation just quoted, for example, Newman’s starting point is the dogma of the Immaculate Conception: “Why is [Mary] ‘Amabilis’ thus specially? It is because she was without sin. Sin is something odious in its very nature, and grace is something bright, beautiful, attractive.” With other saints, “whatever want of amiableness … really exists” in them can be traced to “the remains of sin in them.” But because Mary is full of grace, in that God preserved her from sin from the very moment of her conception, she is all-lovely, truly, the Mater Amabilis.

This compact volume contains similarly moving meditations for each day of the month of May, but it could easily be prayed through with immense spiritual benefit during any month of the year. Scholars and students interested in understanding Newman’s Mariology will want it as part of their personal library, while godparents might consider it for a first communion or confirmation gift. The etchings by Anichini help to make the volume accessible to a broader audience. This is not a book intended solely for intellectuals; young persons and those who lean on Ignatian forms of prayer will be able to use the illustrations to focus their attention.

Less than three decades after Newman’s death, the Blessed Virgin Mary appeared to three shepherd children at the Cova da Iria, in Fátima, Portugal. As part of her message, Mary told the children that, “Jesus wishes to establish devotion to my Immaculate Heart in the world.” Alongside reciting the rosary, praying regularly through Newman’s Meditations on the Litany of Loreto could serve as an especially practical means of working toward this goal. Those who make Newman’s meditations a regular part of their devotional life will, I’m confident, develop a stronger reverence for the Blessed Virgin Mary, whom God has chosen to honor as Queen of Heaven. It is by inviting her to reign in each one of our lives that devotion to Mary’s Immaculate Heart will spread throughout the world. How fitting would it be if Cardinal Newman—one of the most beloved of modern saints—through the influence of this devotional manual, could contribute in some small way to the triumph of the Immaculate Heart in our time.

Meditations on the Litany of Loreto for the Month of May
By John Henry Newman, edited by Peter M. J. Stravinskas.
Newman House Press, 2019
Paperback, 144 pages

About Bud Marr 1 Article
Ryan ("Bud") Marr is Director of the National Institute for Newman Studies and Associate Editor the Newman Studies Journal. He is the author of To Be Perfect Is to Have Changed Often: The Development of John Henry Newman's Ecclesiological Outlook, 1845–1877 (Rowman & Littlefield, 2018), and has also contributed essays to several books on Newman. His research interests include the life and writings of John Henry Newman, ecclesiology, and the reception of Vatican II.