Dr. Kevin Starr (1940-2017) was an amazingly prolific, talented, and innovative historian. His books on California, especially the five-volume California Dream series, which he completed while he was California State Historian, remain models of true scholarship. His academic background, interestingly enough, had been in literature, rather than history, and he was able to bring together the two disciplines in a beautiful and telling fashion. He also studied library science and theology, much of which shows rather happily in his scholarship. 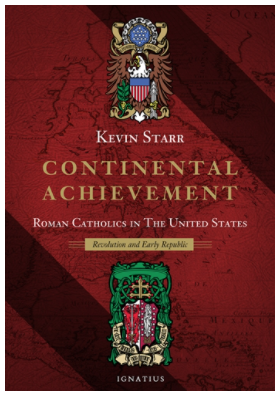 At the time of his sudden death from a heart attack in January 2017, he was working on a rather extensive manuscript dealing with the history of Catholicism in the United States. His wife, Sheila, completed it, at least partially, this year: Continental Achievement: Roman Catholics in America—Revolution and the Early Republic. Starr had originally projected the work to be some twenty chapters long, but this posthumous work published by Ignatius Press still covers a weighty ten chapters, from the Battle of Bunker Hill in 1775 through the Battle of New Orleans, 1815.

As with his earlier works of history, Starr’s Continental Achievement is both fetchingly insightful and wickedly clever. Take, for example, his description of John Adams and George Washington attending a Catholic Mass:

Commanding the siege of Boston as of September 1775, George Washington likewise followed this irenic approach. Yet, in his case, a measure of sincerity was at work, for Washington, an aristocratic Anglican, loathed the virulent antipopery that characterized all classes and institutions of New England. On Sunday afternoon, 9 October 1774, for example, while attending sessions of Congress, Washington went to vespers at Saint Mary’s Church in Philadelphia. While Washington merely noted the visit in his diary, his companion, John. Adams of Massachusetts, took the occasion to share with his wife a typically New England response. “He had ‘heard a good, short moral essay,’ Adams wrote to his wife later that evening, ‘upon the duty of parents to their children, founded in justice and charity, to take care of their interests, temporal and spiritual. This afternoon’s entertainment was to me most awful and affecting; the poor wretches fingering their beads, chanting Latin, not a word of which they understood; their Pater Nosters and Ave Marias; their holy water; their crossing themselves perpetually; their bowing and kneeling and genuflecting before the altar. The dress of the priest was rich with lace. His pulpit was velvet and gold. The altarpiece was very rich, little images and crucifixes about, wax-candles lighted up.’ Adams concluded his letter with a flourish. ‘Here,’ he wrote, ‘is everything which can lay hold of the eye, ear, and imagination, everything which can charm and bewitch the simple and ignorant. I wonder how Luther ever broke the spell?’ Adams’ letter has become a classic of its kind. American Catholics remain grateful for Washington’s silence.

As just seen, Starr’s writing throughout the book proves equally intelligent and intriguing; we should remain grateful for Starr’s humor.

Perhaps most effectively, again, Starr ably combines biographical sketches with larger, influential ideas. Coming out of their Reformational colonial experiences, for example, Americans tended to be not just pro-Protestant but stridently anti-Catholic. To the minds of many colonial Americans, Catholics were not just wrong, they were evil, ignorant, superstitious, dark, and oppressive. They wanted, as American Protestants feared, not simply a false theology to smother the people in conformity indirectly, but the means by which to control all through the direct tyranny of the papacy. The “fierce spirit of liberty is stronger in the English Colonies probably than in any other people on the earth. . . . Religion, always a principle of energy, in this new people is no way worn out of impaired . . . . The people are Protestants; and of that kind which is most adverse to all implicit submission of mind and opinion,” the grand Anglo-Irish statesman, Edmund Burke, had explained. Already sensitive to religious matters because of the internal British struggle between Anglicanism and Puritanism, Americans carried with them a dread fear of all things even remotely Catholic.

In the spring of 1774, Great Britain closed the port of Boston, established martial law in Massachusetts under the governor, and closed all common law courts which might potentially try British citizens. Americans, in and out of Massachusetts, referred to these as the Intolerable Acts. While these Acts were bad, in and of themselves, Americans were reluctantly willing to live under them with only some violent protests. However, none of the acts, individually or collectively, were enough to cause open American rebellion at any significant or sustained level.

But when, in June, Parliament passed the Quebec Act, and word reached the American colonies in early August, the Americans immediately called for a Continental Congress—in imitation of the Stamp Act Congress a decade earlier—to discuss means of permanent American resistance. Congress soon adopted the local Suffolk (Massachusetts) Town Resolves:

That the late act of Parliament for establishing the Roman Catholic Religion and the French Laws in that extensive country now called Canada, is dangerous in an extreme degree to the Protestant religion and to the civil rights and liberties of all Americans; and, therefore, as men and Protestant Christians, we are indispensably obliged to take all proper measures for our security.

The Quebec Act, Starr ably explained, would have allowed all of what are now the Great Lakes states (then, Upper Canada) to go to the Quebecois, but, specifically and most dangerously, to those who practiced the Roman Catholic religion. This would place Roman Catholic power on the borders of New England’s northern and western frontiers, thus exposing the Protestants to grave danger, an imagined Indian army led by the papacy. John Sullivan, soon to be General John Sullivan of the Continental Army, declared that should the Quebec Act take effect, “no God may as well exist in the universe.”

By passing this law, Starr argued, Parliament had overturned nearly three centuries of policy and custom, and the Americans were willing to separate from the Mother Country and make their own way in the world as an independent people.

Though anti-Catholicism subsided during the actual revolution—as able and noble Catholics such as John and Charles Carroll—gave everything for the Catholic side, and Washington chided anti-Catholic bigotry, anti-Catholicism would again mar American history from time to time throughout the history of the early Republic. Most of the time, such prejudices remained below the surface, but at other times, such as with the burning of a Massachusetts convent and school in the early 1830s, the anger of the mob made itself manifest in demonic ways. Anti-Catholicism, Starr explained, was “virulent as well as folkloric.”

As noted, Starr ties his narrative together with mini-biographies. Not surprisingly, given the time period covered, much of Continental Achievement follows the career and ideas of America’s first Roman Catholic archbishop, John Carroll. While Carroll is the superstar, Starr also covers such diverse personalities. Starr nicely and effectively describes the classical and republican thought of John’s cousin, Charles Carroll of Carrollton, the only Roman Catholic signer of the Declaration of Independence. Starr is especially good at explaining the roles of the Jesuits (even after the Jesuit order was disbanded) in American history, and the reader is introduced to such fascinating figures as Pierre-Rene Floquet, with mainstream clergy, such as Bishop Jean-Olivier Briand suspecting Jesuitical machinations. Starr gives us Irish and Polish mercenaries, engineers, and cabalists.

In Continental Achievement, we get to meet John Barry, a devout Roman Catholic and co-founder (founding father) of the American Navy, along with a number of Catholic military officers, and, of course, all of the French allies—many of whom were also Free Masons. It’s not just Catholics, though. Starr gives context to the mini-biographies of American Catholics by also describing the lives of non Catholics such as Adams, Washington, Ben Franklin, Alexander Hamilton, and others of the founding pantheon.

Starr divided the book into two parts. The first part, a history of the American Revolution, truly covers all aspects of the topic—from the officer corps to the frontier skirmishes and battles. In all aspects of the book, Starr convincingly shows how what might seems minor in American history—this or that Catholic person or this or that Catholic moment—is actually linked, inextricably, to the larger events of American history. Likewise, part two of the book covers all aspects of diocesan formation in the United States—from the large dioceses to the frontier ones. Starr, to be sure, is never niggardly in research, writing, or evocativeness. Each section is masterfully crafted and executed.

Overall, Continental Achievement is an excellent book, at once captivating and wittily informative. Starr left an immense legacy, and Continental Achievement serves as the perfect exit and denouement from this world of sorrows. We also owe a debt of gratitude to his wife, whose editorial skill with the manuscript are obvious at every level of the book. She even offers a note at the end of the book explaining just how essential Kevin Starr’s Catholic faith was to him and his career and his scholarship.

Regardless, here’s hoping that Starr’s toasting us mere mortals with other California (and non-California) Dreamers in the Great Eternal Banquet.

• Related at CWR: “A Truly Catholic History of North America” (Dec 28, 2016): An interview with Dr. Kevin Starr about Continental Ambitions.

About Bradley J. Birzer 14 Articles
Bradley J. Birzer is Russell Amos Kirk Chair in American Studies and Professor of History, Hillsdale College and author of several books, including noted biographies of J.R.R. Tolkien, Charles Carroll of Carrollton, Christopher Dawson, and Russell Kirk. His latest book is Beyond Tenebrae: Christian Humanism in the Twilight of the West (Angelico Press, 2019).