Anyone who has experienced the miracle of modern dentistry mourns little the passing of the Middle Ages. But Modernity (the period from the Renaissance to sometime in the twentieth-century), even with extraordinary advances in medicine and science, was a mixed bag (we are now supposedly living in the age of Postmodernity). Man, liberated from the shackles of God and the Great Chain of Being, became enslaved to his own impulses, desires, and ideological illusions. The resulting dislocation, fragmentation, and isolation was paralleled by grave disturbances in his soul. This phenomenon was accompanied by creative distortions in literature, music, and art. 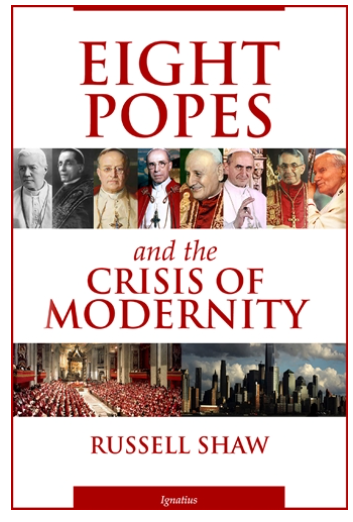 Aided by technological advances, Modernity reached the point of crisis in the twentieth-century. “God lost His dwelling place,” Romano Guardini observed in The End of the Modern World, published in 1956, “thereby man lost his proper position in existence.”

Efforts to restore both God and Man to their respective and rightful places were directed by eight men, chosen to lead the Church and bearing the title of Supreme Pontiff. Russell Shaw summarizes these efforts in his new book, an excellent introduction to the papacy in the twentieth-century. Many Catholics have a vague familiarity with the Bishops of Rome prior to Vatican II (the Pius’s have a tendency to run together), and the Council often overshadows individual popes. It is a particular merit of the book that each pope is treated individually without sacrificing the significance of the institutional whole.

Man, made in the image and likeness of God, was disfigured by Modernity’s unholy trinity of Darwin, Marx, and Freud. The consequences—biological determinism, materialism, the sexual revolution—when taken together, represented an unprecedented attack on human dignity.

Pius X (1903-1914) responded with a condemnation of Modernist propositions. And, as Shaw points out, Pius traced the roots of Modernism to agnosticism. Often criticized for his heavy-handed engagement with a changing world (he required an oath of all priests rejecting Modernist ideas), Shaw is rightly sympathetic. The Holy Father was keenly aware of the danger that lurked behind Modernism and took steps to combat it.

Benedict XV (1914-1922) had to face the immediate danger of world war and the more daunting task of making peace. He promulgated a new Code of Canon Law, tried to smooth diplomatic tensions, and clarified the Church’s missionary efforts (bearing particular fruit in places like Africa where Cardinal Robert Sarah’s vocation was nurtured by French missionaries). His successor, the mountain climbing librarian Pius XI (1922-1939), secured the sovereignty of Vatican City, started Vatican Radio, and denounced the diabolical attacks on human life in the forms of communism, Nazism, and anti-Semitism. Pius XII (1939-1958) continued the struggle against dehumanizing totalitarian systems and, though not beyond criticism, did far more than is generally acknowledged to help the Jews during the Holocaust.

Shaw continues with the consequential pontificate of John XXIII (1958-1963). The jovial and humble pope is mostly remembered for calling the Second Vatican Council (1962-1965), the fruits of which he did not live to see. But the Council also exposed competing visions of the Church that inform liturgical and theological debates today. Shaw wisely gives the Council its own chapter and offers a succinct and fair assessment of its major documents. This is no easy task given the massive amount of conciliar literature, much of it colored by a particular view of the Council. He sticks close to the perspectives of men including Fr. Joseph Ratzinger (the future Benedict XVI) who was there and had great influence on conciliar thought.

Pope Paul VI (1963-1978) saw the Council through after the death of his predecessor. Paul was beset by revolutionary upheaval in the world and within the Church. Both upheavels had the mark of the Evil One, but it was the tumult in the Church gave rise to his observation that the “smoke of Satan” had entered the “temple of God”. In a counterrevolutionary document, the encyclical Humanae Vitae, Paul VI reaffirmed the Church’s commitment to life. It proved divisive and remains so, testifying to his prophetic vision as a sign of contradiction in a world gone mad.

The chapter on John Paul I (1978) is unsurprisingly short. He reigned for a mere thirty-three days (a number that Shaw shows is no accident). It is, though, one of the more interesting chapters. Shaw of course deals with the speculation surrounding John Paul’s death and dispenses quickly and decisively with any notion that he was murdered. But he also relates a personal story (one for which he offers an unnecessary apology for including), about a dream he had at the time of the Holy Father’s death. It is truly remarkable and, whatever its merit, reminds us that the mystery of faith—the threads of the Great Tapestry being woven in all our lives—relentlessly reveals itself in surprising ways, connecting us to each other and to God. It leaves the reader with the sense that John Paul I’s thirty-three days are as consequential in the eyes of God as his successor’s twenty-seven years.

The reign of John Paul II (1978-2005) has been amply and thoroughly covered, most recently by George Weigel. The outlines of the life and pontificate of the pope from Poland are familiar, and Shaw assumes as much on the part of the reader. Still, some details bear repeating and Shaw chooses well. He discusses John Paul’s four key encyclicals: Centesimus Annus, Veritatis Splendor, Evangelium Vitae, and Fides et Ratio, as well as his Theology of the Body (as it is now known). Shaw, to his credit, does not avoid the pope’s blind spots, namely, the sex abuse within the Church. But neither does he allow them to overshadow the extraordinary reign of an extraordinary man.

The papacy is a wonder of institutional endurance and spiritual continuity. Russell Shaw’s book is a snapshot of the last century in that two-thousand year history, set against a darkening age; an age in which diabolical spirits roamed and raged against Man, seeking his dissolution. We were not without shepherds. The popes of the twentieth-century were great men, saints even, and in this slim volume we are reminded of their sanctity and their humanity and the great love they bore Christ and His Church.