Vatican City, Jun 3, 2020 / 09:30 am (CNA).- The Vatican Museums are offering free entry to medical workers in appreciation for their work on the front line of Italy’s coronavirus outbreak.

Doctors, nurses, and all other staff members of Italy’s public and private health facilities will have free entry to the museums on June 8-13.

The announcement June 3 came as Italy opened its regional borders, allowing doctors throughout the country to visit Rome.

The Vatican is also offering free entry for the next two weeks to the Pontifical Villas and gardens at Castel Gandolfo, which are due to reopen for weekend visits starting June 6.

All visitors to the Vatican Museums are required to make online reservations in order to limit the number of people in the museums and stagger entrance times. Visitors will only be admitted if they wear a face mask and undergo a temperature check.

The daily number of new documented cases of COVID-19 in Italy rose this week after Italy lifted many of its coronavirus restrictions in May.

There were 318 new cases of COVID-19 recorded in Italy June 2, up from 178 confirmed new cases June 1. More than 50% of the new infections were recorded in Lombardy, the epicenter of Italy’s coronavirus outbreak.

To prevent the spread of the coronavirus, group visits to the Vatican Museums will be capped at a maximum of 10 people.

To accommodate local visitors, the museums have extended their hours to encourage afternoon and evening visits, especially over the weekend.

The museums will be open Monday through Saturday beginning at 10 a.m. each day. On Friday and Saturday the museums and gardens will stay open until 10 p.m. with an option to purchase cocktails in the museum courtyard.

Visitors to the Vatican Museums will be able to see the newly restored frescoes in the Raphael Rooms’ Hall of Constantine, which were unveiled to the public when the museum opened its doors June 1.

The Italian Ministry of Health has reported 39,893 current positive cases of COVID-19 in Italy as of June 2. More than 160,000 Italians have recovered from the coronavirus and 33,530 have died, including at least 125 healthcare workers.

Vatican City, Sep 13, 2018 / 12:01 pm (CNA/EWTN News).- The most important duty of bishops is total dedication to the pursuit of holiness and the holiness of their local Church, Pope Francis said to a group of 130 new bishops Thursday. 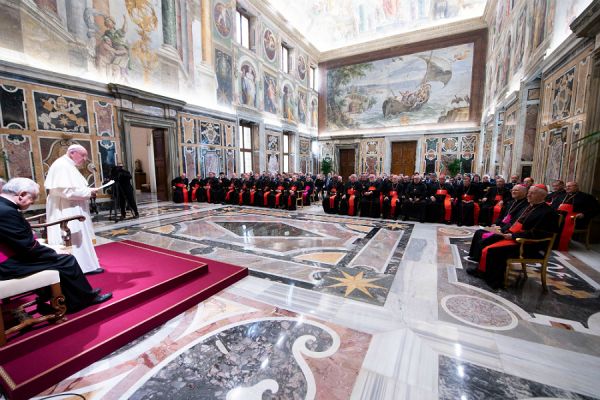 Vatican City, Sep 20, 2018 / 05:21 pm (CNA/EWTN News).- All people have a responsibility to fight new forms of racism in the modern world, Pope Francis told more than 200 participants at a Rome-based conference this week.

“We are living in times in which feelings that many thought had passed are taking new life and spreading,” the pope said Sept. 20.

The international conference on “Xenophobia, Racism and Populist Nationalism in the Context of Global Migration” concluded Thursday. It had been promoted by the Vatican’s Dicastery for Integral Human Development, the World Council of Churches and the Pontifical Council for the Promotion of Christian Unity.

Addressing those present, Pope Francis warned that the modern world appears to be seeing an increase in “feelings of suspicion, fear, contempt and even hatred towards individuals or groups judged for their ethnic, national or religious identity.”

These individuals are “considered not sufficiently worthy of being fully part of society’s life,” and such sentiments “all too often inspire real acts of intolerance, discrimination or exclusion,” he said.

Exclusion of foreigners can also become enshrined in political policy, as some lawmakers exploit fears and misgivings for political gain, he said.

Faced with these social changes, “we are all called, in our respective roles, to cultivate and promote respect for the intrinsic dignity of every human person,” the pope said.

He emphasized the role of religious leaders, educators, and media in this endeavor to promote a culture that respects human life and dignity.

Rev. Olav Fykse Tveit, secretary general of the World Council of Churches, told Vatican News that the conference was intended to show a strong ecumenical commitment to addressing the global issues of racism and xenophobia, to hear from voices across the globe about the issue, and to create common text that can be used as the basis of further efforts.

He stressed the importance of supporting politicians who are standing up for the human rights of migrants, and emphasized the role of religious leaders in upholding human dignity in public discussions surrounding migration.

“There is no easy political answer to all of this: it is a very complex political situation, but we believe that the churches, with our values but also with our networks, our communities, as human beings and as people of faith, can contribute a lot,” he said.