As someone who is involved in the Catholic Worker movement, I am always on the lookout for new texts on the life and work of Dorothy Day, even though a certain redundancy has begun to creep into the secondary literature that has gotten more than a bit tiresome. 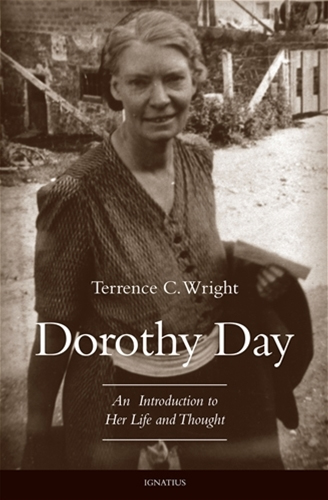 There are already, of course, many fine books on Dorothy Day stretching back several decades now, most of which are quite good as expositions of her life and thought. Therefore, at first glance one wonders why yet another text on Dorothy Day is necessary. After all, we know pretty much all there is out there to know about her biography, which is by now well documented with source materials from the people who knew her best, as well as her own autobiographical books and her personal diaries.

Likewise, the same is true with regard to her political and social views, as well as the basic religious motivations she brought to bear on those realities. The only remaining project (one which my wife and brother in law are involved in) is the transcribing of the hundreds of surviving letters she wrote to her many friends and interlocutors. But short of some startling new revelation in that correspondence there really isn’t much more that can be “added” to what has already been written that will actually deepen our understanding of her life, work, and thought.

Nevertheless, I have long thought that there are two major voids in the literature on Dorothy Day—voids that need no new information in order to be filled, but which do require a different emphasis and perspective. Fortunately, the recent book by Terrence Wright fills in those voids admirably.

The first void has to do with Day’s Catholic faith. While it is true that all of the texts on her life make mention of her conversion to Catholicism and the important role played by her faith in the development of her movement (how could they not?), they rarely place her deep obedience to the teaching magisterium of the Church front and center. They might mention that her Catholicism was of an orthodox and “conservative” type but do so without “connecting the dots” between that fact and everything else she wrote and accomplished. In other words, there is a lack of insight into the synthetic nature of the deep orthodoxy of her faith and her work for the poor.

Therefore, there is precious little development in the direction of using her radical obedience to the magisterium as the hermeneutical key for understanding her radical commitment to the grace-filled “regime”of charity and justice. However, Wright corrects this oversight and foregrounds her deep obedience to the Church, as well as the profoundly orthodox nature of her theology. He notes that both “progressive” and “conservative” Catholics think Day was a “dissenting” Catholic, the former citing this with approval, the latter with dismissive disdain. But, as Wright demonstrates clearly in every chapter of his book, they are both wrong. Her orthodox Catholicism was not an ornamentation or a superficial piety, but the very “food” of her soul. Wright concludes, therefore, that if one ignores the central role played by her deep orthodoxy, one simply does not understand Dorothy Day on even the most rudimentary level. Full stop. If you don’t get this right about her, then you get nothing right about her.

This is also an unbelievably important point with regard to the ongoing Catholicity of the movement she founded. Wright notes in the last paragraph of the text that there are many Catholic Worker houses and farms still in existence. But he also notes that, sadly, many of them really no longer identify as Catholic in any meaningful way. They continue to invoke the legacy of Dorothy, but in a very theologically attenuated form. Her work for “social justice” is viewed as something separate from her unfortunate Catholicism, which is precisely why I eschew the use of the term “social justice” as a descriptor for her life and work, since it is now a term that has been co-opted by secularized Leftists and used as code for an antinomian individualism, especially in matters of human sexuality.

As a Catholic Worker I encounter other Catholic Workers from time to time and inevitably the topic of Day’s Catholicism comes up in conversation. And more often than not, the morally and theologically conservative nature of her Catholicism is dismissed as merely the result of her inculturation into the form of Catholicism that was dominant at that time. “But,” so the narrative continues, “if she were alive today she would be more liberal and progressive in her theology.” Thus does her Catholicism get mentioned but only to the extent that it can be quickly domesticated through careful transposition into the safe bromides of modern Leftist piety. But Dorothy Day is in good company on that score since they make the same domesticating move with regard to Christ himself.

Viewed through the lens of this context, therefore, one can see that the great merit of Wright’s text is that he shows that he understands this sad state of affairs and is writing this book, not just to “correct the record” in a disinterested historical sense, but to recover Day’s orthodox Catholicism for the sake of helping to save the movement she founded. And, as a Catholic Worker, I am deeply grateful for his efforts in this regard since the movement is indeed at a crossroads, with a deep divide between Catholic Workers who share Day’s theological orthodoxy and those who don’t. It should also be pointed out that Dorothy Day and Peter Maurin both presciently foresaw and advocated for a theological orthodoxy that was much more ancient and far more faithful to the Tradition than was the neo-scholastic manualist theology of their time. They thus anticipated much of the theological, pastoral, and liturgical reforms of the Second Vatican Council. And whatever one thinks of the mixed legacy of some of those reforms (e.g. I think the liturgical reforms were an abomination) the fact still stands that the orthodoxy that Dorothy stood for, was not a stuffy and stale theology of dry syllogisms, stifling dogmatism, and bloodless abstractions, but an orthodoxy rooted in the profound ressourcement intellectual revival of people including Henri de Lubac, Romano Guardini, Etienne Gilson, Jacques Maritain, Virgil Michele, George Bernanos, Charles Péguy, and Maurice Blondel.

All of which underscores the fact that the divide in the modern Catholic Worker movement is not between progressives on the one hand and arch traditionalist scholastics on the other. Dorothy Day was a radical in her political and social views because she was first a truly radical Catholic in her appropriation of the deepest currents in the Church’s ancient Tradition. Day’s obedience to the magisterium, in other words, was so deep, that it allowed her to critique that very same magisterium when it failed to live up to its own teachings. Much as the ressourcement thinkers did in their day, for which they too paid a price and were labeled “heretics” only to be vindicated by that very same magisterium during and after the Council.

Therefore, given this broader debate and context, it must be pointed out that Wright’s text is one of the most important and timely texts on Dorothy Day to come out in a long time. What Wright gets correct is that Dorothy’s orthodoxy gave her more freedom, not less, which was the catalyst for her creative fidelity to the Church that impelled her to “push the envelope”. For example, while remaining totally faithful to the traditional distinction between “counsels and commandments”, she nevertheless pushed for a de-clericalizing of the counsels and a greater emphasis on the universal call to holiness (the perfection of the way of the counsels). Likewise, she totally submitted to the authority of the Church with regard to “just war theory”, but pushed for a deeper awareness of the horrors of modern war in order to call into doubt whether any modern war could be just. Her views on such matters, as Wright notes, cost her dearly during World War II, but it was precisely her obedience to the truth of Christ as enshrined in the Sermon on the Mount, that drove her opposition to war. Wright notes as well that her views on conscientious objection made their way into Gaudium et Spes, showing the extent to which her steady commitment to a set of theological principles were determinative.

The second void in the literature on Dorothy Day that Wright’s text fills has to do with style more than theological substance. Simply put, the text is wonderfully written in a style of prose that should be easily accessible to any moderately educated person. As such, it would make a wonderful introductory text for any adult education course on the parish level, but also a great text for an introduction to theology course on high school or collegiate level, and certainly as a text in any course dealing specifically with the Catholic Worker movement. I have taught such a course and used the text by Mark and Louise Zwick on the Catholic Worker Movement. They too take her theological orthodoxy seriously. But that text is often redundant, overly verbose, and has audience confusion insofar as it mixes a more popular exposition of Day and Maurin with a more erudite analysis in a deeply philosophical and theological register.

Wright’s text has no such verbosity or audience confusion. It is direct and clear, with all specialized theological jargon immediately explained, but in a manner that does full justice to the theological truths at stake. One can tell, in other words, from both the profundity and the clarity of this text, that Wright is a true educator as well as a scholar.

It isn’t often that I write a review and say that a text is “perfect” for such introductory courses. But this one is and I cannot recommend it more highly to educators on all levels.

About Larry Chapp 30 Articles
Dr. Larry Chapp is a retired professor of theology. He taught for twenty years at DeSales University near Allentown, Pennsylvania. He now owns and manages, with his wife, the Dorothy Day Catholic Worker Farm in Harveys Lake, Pennsylvania. Dr. Chapp received his doctorate from Fordham University in 1994 with a specialization in the theology of Hans Urs von Balthasar. He can be visited online at "Gaudium et Spes 22".