, Feb 5, 2020 / 12:40 am (CNA).- A California state university has this week agreed to revise its policies and pay more than $240,000 in fees after a federal court last summer found that the university had discriminated against a student pro-life group and had used mandatory student fees to fund only university-favored views.

In 2017, legal group Alliance Defending Freedom (ADF) filed a lawsuit on behalf of the pro-life student group Students for Life, after California State University–San Marcos denied the group access to funding paid for by mandatory student fees that should have been available to all student groups.

According to ADF, CSU-San Marcos has more than 100 student groups but has been discriminatory in distributing funding to those groups. In the 2016-2017 academic year, the university gave the Gender Equity Center and the LGBQTA Pride Center a combined total of $296,498, or 57 times what the other student groups were granted, which was less than $6,000.

The issue came to light in the 2016-207 school year when Students for Life was denied $500 to fund a visiting pro-life speaker, University of North Carolina–Wilmington Professor Mike Adams, who was to give a talk on “Abortion and Human Equality.” The group members had paid the same mandatory student activity fees required of all students.

Students for Life of America is the largest pro-life student group in the U.S., with more than 1,225 student groups on high school and college campuses throughout the country.

In 2019, a California district court ruled against CSU-San Marcos’ “back room deliberations” that determined how to distribute student group funds, and directed the university to reach an agreement with Students for Life about amendments to their policies. These changes, which will be applied to all 23 schools in the California State University system, will be made so that the policies comply with the state constitution’s viewpoint-neutrality requirement for universities.

“Public universities should encourage all students to participate in the free exchange of ideas, not create elaborate and secretive funding schemes to fund their favorite groups while excluding opposing views from equal access,” ADF Legal Counsel Caleb Dalton said in a statement.

“The university system’s policy changes don’t simply benefit our clients but also benefit any student with a minority viewpoint and every citizen who cares about dialogue and intellectual freedom within our public colleges and university communities,” he added.

ADF Senior Counsel Tyson Langhofer said in a statement that the changes to the university system’s policies will “better align with the ‘inclusiveness’ and ‘individual and cultural diversity’ it touts within its community.”

Kristan Hawkins, president of Students for Life of America, praised the student leaders on campus at CSU-San Marcos for standing up for their rights.

“Pro-life students should have every opportunity available to them that pro-abortion students have,” she said in a statement, “and anything less is a failure on the part of the university to abide by the First Amendment.”

Ukrainian archbishop: No amount of world progress can replace friendship 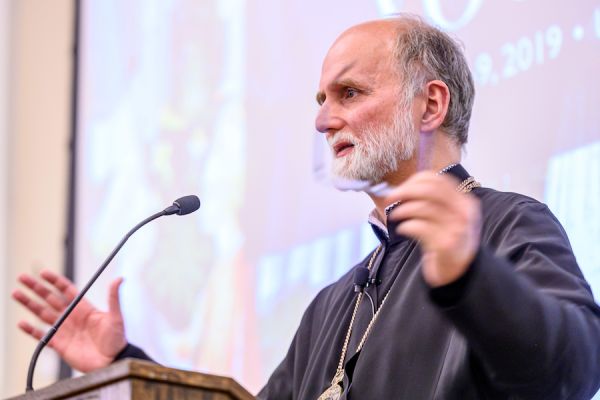 That depends, in part, on how one reads the times.

On the one hand, technological advances have brought illiteracy levels throughout the world from 90% to only 10%. Advances in science and medicine are allowing people to live longer and healthier lives.

“These are some of the good things that are happening. I think a lot of it is done out of friendship, out of good intention,” Archbishop Borys Gudziak, the Ukrainian Catholic Archeparch of Philadelphia, and the Metropolitan for the Ukrainian Catholic Church in the U.S., said November 7. Gudziak was one of the keynote speakers for the Notre Dame Center for Ethics and Culture 21st annual fall conference, which this year had the theme: “I have called you friends.”

“And yet the times are not so good,” Gudziak added.

“In fact, they’re similar to…what it was in 1914 when the Western world was convinced that progress would lead us to great happiness. Then the massacres began. World wars. The genocides,” Gudziak said.

He noted that for all of our technological and social progress, Americans are lonelier, more depressed and more stressed than ever. In Pennsylvania, one of the states where he serves, the opioid crisis has left people sick, dying, lonely and without hope.

“It’s important to focus on friendship because no amount of material, educational, technological, industrial welfare can compensate for the relationships that we are called to,” he said.

Gudziak said some of the most profound friendships he’s seen are those he witnessed in Soviet Russia before it fell, and those he continues to witness in countries controlled by communism, although these friendships are not easy or without cost.

“In all of these countries that were or continue to be communist, where millions of people were killed, where the system killed systematically, people over generations developed a reflex to put on a mask, put up a facade, build a wall because the outside world is dangerous,” Gudziak said.

Families are encouraged to inform authorities against each other in communist countries, “so people in the family don’t say things, because you can’t trust. It becomes like a radiation.”

“You can’t taste it, has no smell, no color, but it mutates the genes. There’s an extra fear chromosome. It’s a reflex. You can’t control it. Two billion people have an added obstacle to cultivate profound friendship.”

And yet it was in these oppressive conditions in Soviet Russia that the Ukrainian Catholic Church, while it lost many members, grew deep roots and bonds of friendship among those that remained.

“(T)he Ukrainian Greek Catholic Church, which had about 4 million members in 1939, with 3,000 priests, was totally – on a visible level – liquidated,” Gudziak said.

“In 1945-46 all the bishops were arrested, hundreds of priests with their families were deported to Siberia. The church was rendered illegal and it remained the biggest illegal church in the world for 43 years until 1989. And it was very reduced. By 1989 there were only 300 priests left,” he said.

“But what a community it was! Forged in that fire of persecution,” he added.

When he met the underground Church, Gudziak said everything was stripped to the bare minimum – bishops had jobs as ambulance drivers or coal workers, there were no schools or churches or official institutions of any kind. The bishops didn’t even know one another’s names, because it was too dangerous to tell someone your name in underground seminary.

“And yet they were profoundly friends of Christ, and it was an incredible, intense relationship of those in the underground,” Gudziak said.

“The friendship was not just kind of a nice thing, it cost profoundly to be a friend of Christ in an atheist totalitarian system,” he said. “It cost to pass down the faith to your children. But the fruits are amazing.”

“I think the story of the Ukrainian Greek Catholic Church, its persecution, its underground life, its survival…it’s not a philosophy, it’s a story of human faithfulness to God…the faithfulness of concrete people to God and to each other.”

From the beginning of humanity, God has been teaching human beings about true friendship, Gudziak noted in his talk.

“From the scriptures we know from our faith, we experience that the Lord so yearns to make us his friends. Moses had a special privilege to see face-to-face. Abraham was called a friend. The value of friendship was modeled by David and Jonathan,” he said.

“Then, Jesus came to us. Our faith, our church, our theology, our civilization is based on this incredible gesture that God comes to be close, to convey his divinity. He sits next to us,” he said.

“What a God, what a Lord, and what is He conveying? He’s conveying the divine life shared by the Father, Son, and Holy Spirit. Friendship…motivates the Father to send his Son into (the world’s) grime, into our anxiety, our sin, the pitch blackness that we can create, into our hell, into our death, to create relationship, to create trust, intimacy, to establish an alliance.”

“Friendship,” he said, “is the school of the spiritual life which reflects the gift of relationship that we have, by virtue of being created in the image and likeness of God. God is triune. He’s personal and there’s relationship. We as persons are called to relationship. We’re called to friendship.”

Besides his appointments in the U.S., Gudziak also serves as the president of the Ukrainian Catholic University in Lviv, Ukraine. In striving to teach their students about true friendship, the university invites academics as well as students with disabilities into its classes and campus, he said.

“They have one basic question: Can you love?…There’s no more important pedagogical question.”

In a world increasingly divided along political, religious and other ideological lines, Gudziak told CNA it is all the more important that Christians reflect on God’s friendship to us, and in turn our friendship with him and with others.

“I think ever since The Enlightenment, when we’ve really been focusing a lot on ideas, there’s a tendency for ideas to become ideologies. And our consciousness in the Western world is very intellectualized, and our relationships can become abstract. They can be categorized according to different positions, world views, and they’re in our head,” he said.

“If we look carefully at the Gospels and listen to Jesus, he doesn’t speak about grand ideas. He talks about the Father, the Holy Spirit. He talks about relationships,” he added. “He talks about persons and interaction among persons, and he uses very personal, very concrete examples and stories to teach about life. He doesn’t start from ideas and systems and ideologies and systems.”

In his talk at the conference, Gudziak noted that Jesus became friends with “very concrete people, Peter and John and Nathaniel. It’s not an ideology, it’s not a system. There weren’t too many buildings there in Jesus’s time, nor in Paul’s or for 300 years.”

“So maybe if we lose the buildings and the endowments and the properties, maybe that’s not the end of things, if we can recover or develop more profoundly our friendship.”

“This should never have been a problem in the first plac… […]

Christians pray, fast for release of missionaries kidnapped in Haiti