What a convincing lie the Enlightenment spread. The world was suddenly divided into two: the realm of faith and the realm of reason. The small gap between these realms became a chasm in the hands of Protestants, who did not have the Magisterium or the philosophical background to make sense of the advancement of science. While the realm of faith gave birth to Intelligent Design, the realm of reason produced countless atheists who claimed that science could provide all the answers. 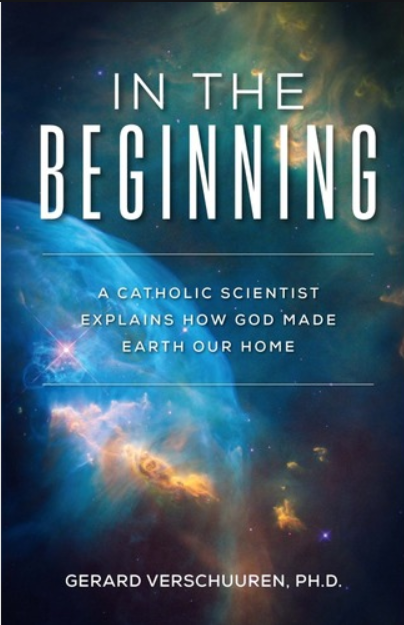 Gerard Verschuuren’s In the Beginning takes apart this false dichotomy not just for the atheist who falls short of explaining why we are here, but also for the Christian who tries to swim against the tide of scientific discovery. Verschuuren is a biologist specializing in human genetics who also holds a doctorate in the philosophy of science. His resume as scientist and a man of faith provides him a unique perspective Catholics need to stand against the tide.

In the Beginning is written for the layman who is interested in understanding where the Faith falls within the spectrum of knowledge. Thankfully, for those of us who do not have advance degrees in science, Verschuuren starts with explaining some basic concepts, like timescales and different dating techniques.

Before getting into the nitty-gritty yet fascinating aspects of the physical universe, an explanation of Aquinas’ often misunderstood primary and secondary causes is in order, because this understanding of where mortal human beings and the finite universe stand in regard to God, who created time and space, is essential. This distinction of causes is what leads us to a Creator who is love, as he has revealed himself in the Scriptures. He is also the Primary Cause who does not need to be enslaved to the happenings of secondary causes, i.e., the nature. He holds all in existence.

With a better understanding of the Primary Cause, Vershuuren spells out what came after God created the Universe out of nothing. The regularity of the physical laws of nature, precision of physical constants, and fine-tuning of anthropic coincidences all point to a Lawgiver. The author fleshes out these arguments as he presents opposing ideas of randomness, and weak and strong anthropic principles, all of which attempt to explain why the universe is perfect for life to exist on Earth.

Then, Verschuuren tackles the notion of chaos in the chapter titled “The Evolution of the Universe.” He claims that what many call chaotic is in a grand scale simply probable: “Whereas a single random event may not be predictable, the aggregate behavior of random events is.” Scientists cannot explain the predictability of this randomness by calling it “blind” and “without memory or favorites.” However, as Catholics, once we step outside of the secondary causes, which science deals with, we can see the hand of Divine Providence. While this belief in Divine Providence will not make the randomness more predictable, we can expect statistical randomness to be tested by scientists.

Finally, in the second half of the book, Verschuuren delves into the question of why life came to be on Earth. He lays out the three common explanations and expounds on each: 1) the statistical law of large numbers made it possible; 2) God’s divine intervention took care of it; and 3) the laws of nature made it possible.

This chapter, admittedly, was the most interesting section of the book for me, since the Catholic Church’s claim that faith and reason are not opposed to each other was one of the main reasons I became Catholic. As an atheist, as inexplicable as it was, I subscribed to the first option: that life as we know it sprang forth through coincidences and chances, like the apes randomly hitting typewriters to produce Shakespeare’s works. Needless to say, the possibility of such an unlikely event occurring is a desperate attempt to avoid other explanations.

The second explanation is propagated as the Intelligent Design Theory, which argues that God actively guided the process of evolution through periodic divine interventions. The theory of “irreducible complexity” has attracted many in the Christian circles. However, there are objections to irreducibility of this complexity and to intelligence of this design. The ID theory reduces God to a secondary cause who needs to intervene regularly to fix what he had set in motion. Without a proper distinction between the primary and secondary causes, ID theorists fail to understand that God doesn’t need to keep winding the watch. Verschuuren quotes St. Thomas: “The same effect is not attributed to a natural cause and to divine power in such a way that it is partly done by God, and partly by the natural agent; rather, it is wholly done by both, according to a different way” (Summa contra Gentiles, 3, 70, 8).

The third option, Verschuuren claims, offers the most satisfactory scenario by taking design seriously while allowing randomness to work within the design. Random events like mass extinctions, ice ages, volcanic eruptions, composition of the atmosphere, and impacts of meteorites all eventually contributed to the dawn of humanity. Once Planet Earth became the perfect home for human beings, a new life form that was unlike any other appeared. The author describes the five faculties that make human beings stand apart: language, rationality, morality, self-awareness, and self-transcendence. These faculties cannot be sufficiently explained in scientific terms.

Verschuuren concludes this chapter with a visual analogy of what he calls the Cosmic Design: “The road to humanity is a process that meanders like a river. On the one hand, it follows a path that is coincidental and random. On the other hand, in spite of its winding flow, it also moves in a specific direction, steered by a path of least resistance… In other words, evolution follows the path of least resistance in the landscape of the cosmic design” (131-132). This analogy provides an alternative to atheistic chaotic evolution and the incompetent God of Intelligent Design Theory. Here we can imagine in our finite minds how the Primary Cause may have directed the course of the natural world so that His love can be witnessed.

In the Beginning explains the evolution of the universe and Planet Earth using simple terms so that Catholics can see that the Primary Cause is beyond the secondary causes with which science deals. This is a book for people who have to weather questions from atheists or ID supporters. Within its pages, the Catholic can rely on the rich philosophy and theology of saints who remind us that faith and reason indeed work together: “Science always creates a fragmented reality that only religion can piece together” (90).

In the Beginning: A Catholic Scientist Explains How God Made Earth Our Home
By Gerard Verschuuren, Ph.D.
Sophia Institute Press, 2019

On True Knowledge and Apostolic Intelligence

“Today, more and more, individuals are of the opinion that religion is a waste of time, that only social action can make a significant contribution to man’s well-being.” — Joseph Ratzinger, 1980.1 “Men need more than […]

“Anti-science” vaccine skepticism rooted in the breakdown of institutional trust

America’s media and health establishment are expressing horror and consternation at what has now become a mass resistance movement to the implementation of the COVID-19 vaccine, as millions insist they will not receive it despite […]